Home » News » Even after one year…: Police yet to file FIR against person accused of grabbing MUDA site 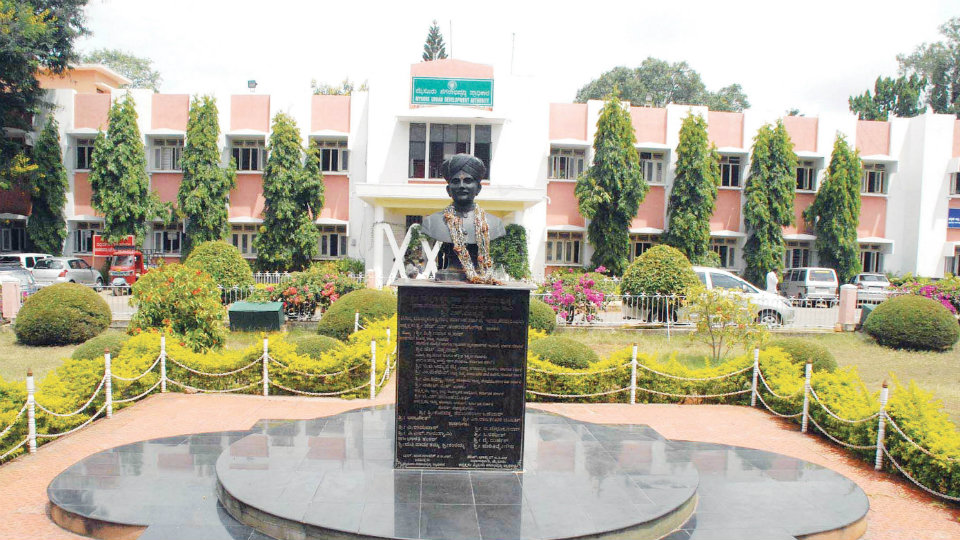 Even after one year…: Police yet to file FIR against person accused of grabbing MUDA site

Mysore/Mysuru: Even as many cases of site grabbing by unscrupulous elements have been reported across the city, it has come to light that the Police have failed to register an FIR against a site grabber who has been accused of usurping  a site allotted to an applicant using fake documents, even one year after MUDA lodged a complaint.

On April 5, 2019, the then MUDA Special Tahsildar Vishwanath had lodged a complaint with the Lakshmipuram Police accusing a person of selling a site that stood in the name of the original site allottee, after obtaining the Title Deed by using fake documents. But the Police  it seems have failed to understand the seriousness of the complaint, as no FIR has been registered even after one year.

Meanwhile, it is learnt that several such complaints have been lodged at Police Stations and the MUDA authorities have failed to submit certain documents asked by the Police for registration of cases.

The MUDA also issued Khata on May.10, the same year. But Raje Urs had failed to obtain the Title Deed for his site.

Taking note of this, an unscrupulous person brought another person, a fake, in the name of Raje Urs and succeeded in getting him the Clear Title Deed on Nov.3, 2003, following which the site was registered in the name of the fake person at the MUDA Sub-Registrar’s office on Feb.5, 2004. Although it is mandatory to submit the allotment letter in original while issuing Title Deed, it has not been done in this case, thus giving rise to suspicions on the role of some MUDA staff and middlemen.

Meanwhile the original allottee, who had failed to apply for Title Deed at MUDA earlier, went to the Sub-Registrar office to register the site in the name of his daughter, when he came to know that a Clear Title Deed issued by MUDA was necessary for Registration. Later, he applied for the Title Deed for his allotted site at MUDA in February, 2019, when he realised that the Title Deed had already been issued to another person of his name (a fake one) in Nov. 2003 itself and the person had sold the site to one Nataraju and subsequent to Nataraju’s death, the MUDA officials had issued a ‘Pouthi Khata’ in the name of C.N. Nagendra, the son of the deceased Nataraju on July 9, 2015. Thereafter, Nagendra had sold the site to one M. Shobha and later on Shobha too sold the site to K.P. Muddaih and Kannu Muddaiah on June 21, 2018 and the site was subsequently registered jointly in the name of the two, it is learnt.

The original site allottee  Raje Urs’ indifference to get the Title Deed has cost him dear as now he is left with no option other than waging a legal battle.

After the matter came to light when Raje Urs applied for Clear Title Deed in February, 2019, with the site having already exchanged four hands and currently the site stood in the joint name of K.P. Muddaiah and Kannu Muddaiah, the then MUDA Special Tahsildar Vishwanath, lodged a complaint (dated Mar.29, 2019) with Lakshmipuram Police on Apr.5, 2019.

But since then, no FIR has been registered and the unscrupulous person, who grabbed the site and also sold it using fake documents, is yet to be traced.

The present MUDA Special Tahsildar Nischay, reacting on the case, said that the then Special Tahsildar Vishwanath had  lodged a complaint with Lakshmipuram Police. But no FIR has been registered so far and the Police have sought certain documents for carrying out investigation, which will be submitted soon.

Nischay further said that the original site allottee had come to him and both of them will be visiting the Police Station in a couple of days and give an explanation on the documents sought by the Police. The original allottee too may lodge a complaint and he (Nischay) has spoken to the allottee’s advocate regarding the issue, he pointed out.

Meanwhile, although there are several such complaints of fake document menace in respect of sites in Vijayanagar First and Second Stages, the MUDA seems to be reluctant to act on the complaints.