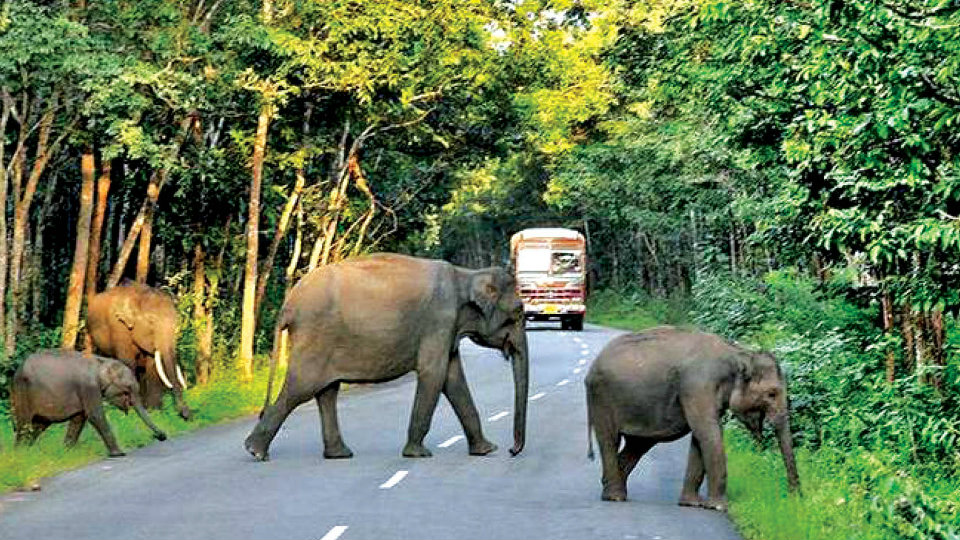 Bengaluru: In a major relief to Karnataka that has been relentlessly fighting to keep roads through Bandipur Tiger Reserve closed at night, the Ministry of Road Transport and Highways (MoRTH) and Ministry of Environment and Forests (MoEF), told the Supreme Court that they have accepted the recommendation of maintaining status quo on the National Highway (NH) 766.

The Ministry move comes as a setback to the Kerala Government that has been demanding the opening of the Highway for night traffic. Considering Kerala’s demands, the Ministry had earlier favoured the lifting of the night traffic ban. Now the Ministry has made a U-turn and swore before the Supreme Court that it would maintain present status quo.

At present, there is a 9 pm to 6 am ban on traffic on NH-212 (now NH 766) that connects Karnataka to Kerala via Gundlupet in Chamarajanagar and on NH-67 that links Karnataka to Tamil Nadu. The ban was imposed in view of high wildlife killings by speeding vehicles. Karnataka has been allowing restricted and equal fleet of both Kerala and Karnataka road transport buses and emergency vehicles during the ban hours.

Kerala’s hopes dashed: Wildlife experts said that the Ministry’s stand has practically wiped out Kerala’s hopes of revoking the ban. Kerala has been arguing that its economic activity has taken a hit due to traffic restrictions. The ban recently became an election issue in that State when Congress President Rahul Gandhi, addressing a rally at Wayanad from where he is contesting, said that problems pertaining to night traffic ban through the Bandipur Tiger Reserve will be looked into.

Rahul’s remarks evoked sharp reactions from wildlife experts in Karnataka who said that the Congress President has been ill-informed about the ongoing tussle between the two States.

Expert Committee recommendations: Appearing before the Apex Court on May 1, MoRTH submitted that it, as well as MoEF, were in agreement with the recommendations of the Committee of Secretaries that had noted that Bandipur wildlife had adapted to the ban between 9 pm and 6 am.

The Committee, comprising senior officials from Karnataka, Kerala, MoRTH, MoEF, and the National Tiger Conservation Authority (NTCA), had decided in February this year that the ban should continue in the interests of wildlife conservation.

Alternative routes: The Committee also consulted the Chief Secretaries of Karnataka and Kerala via video conference and recorded their stand. It observed that apart from the Bandipur route, Karnataka government had spent crores of rupees to improve the condition of alternative roads via Hunsur-Gonikoppa-Kutta-Manandawadi-Kattikkulam and via Konanur-Makutta and Madikeri-Kutta.

The ban was imposed by the State Forest Department in 2009, and won the case in the High Court of Karnataka a year later. In 2010, Kerala filed a Special Leave Petition against the High Court order in the Supreme Court. The Committee found that arguments by the Karnataka government are in the larger interest of the flora and fauna.

Under pressure from Kerala Government, MoRTH had earlier proposed an elevated road through Bandipur. It even claimed to have obtained the consent of Karnataka government. This had led to a series of protests in Karnataka forcing the Karnataka government to deny any such proposal.

Ministry move welcomed: In view of the affidavit filed by the Centre, the Apex Court observed that nothing remains of the petition. However, the matter was adjourned as Kerala has sought response to the affidavit.

Meanwhile, Wildlife First, which filed an interlocutory application in the case, said it was an important and positive development. Praveen Bhargav, Wildlife First, said: “This will ensure protection of Bandipur. We will continue to pursue the matter in the Apex Court.”

Punati Sridhar, Principal Chief Conservator of Forests (Head of Forest Force), said, “It is a positive development and all along the State has maintained its position for the nine-hour ban. This is a victory for conservation.”

Wildlife activist Joseph Hoover said, “It is a victory for all wildlife/ environment NGOs, activists, enthusiasts and photographers. This shows that if we all work united without ego for common goal anything can be achieved.”