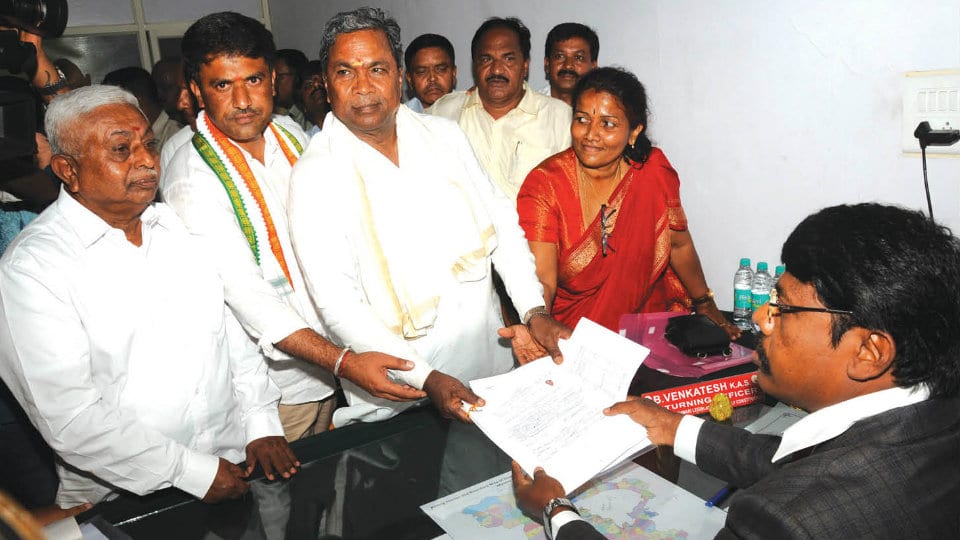 Siddharamaiah’s high-profile nomination from Chamundeshwari, which he last represented in 2004, saw some drama. The procession accompanying him clashed with the followers of Devegowda at Chamaraja Circle. This forced the Police to resort to a lathi charge to control the mob fury.

After the puja rituals, Devegowda and his supporters arrived at Mini Vidhana Soudha to file his papers at 2.05 pm and filed his nominations in three sets at 2.10 pm before Returning Officer B. Venkatesh. Devegowda’s wife Lalitha, Zilla Panchayat member Beerihundi Basavanna, Belawadi Shivamurthy and other leaders were present.

After filing the papers, Devegowda said he and Siddharamaiah were together from 1983 to 2006 and worked for each other’s success in politics. “After Siddharamaiah shifted to Varuna Assembly segment in 2008, he never cared for the people of the Chamundeshwari segment. But, now, to make way for his son Dr. Yathindra, Siddharamaiah wants to return to Chamundeshwari,” he said. “Earlier, Siddharamaiah used to say Chamundeshwari was his Karma Bhoomi but now he is saying Badami is close to his heart. People of Chamundeshwari have already decided to teach a befitting lesson to the CM. Siddharamaiah very well knows that if H.D. Kumaraswamy and G.T. Devegowda join hands, he (CM) will be defeated. That is why he is migrating to Badami,” he added.

Chief Minister Siddharamaiah said he is happy with the people’s support. “I?have an emotional bonding for the Chamundeshwari segment. Thus, I?decided to end my electoral politics from the segment from where I?started. I have political opponents but not enemies,” Siddharamaiah said.

“I have filed the nomination papers without any confusion or tension. This is my last elections and I have got tremendous response during my campaigns. This shows that people have decided to bless me,” he said. Siddharamaiah was first elected from Chamundeshwari segment as an Independent in 1983, but, he shifted to Varuna segment in 2008.