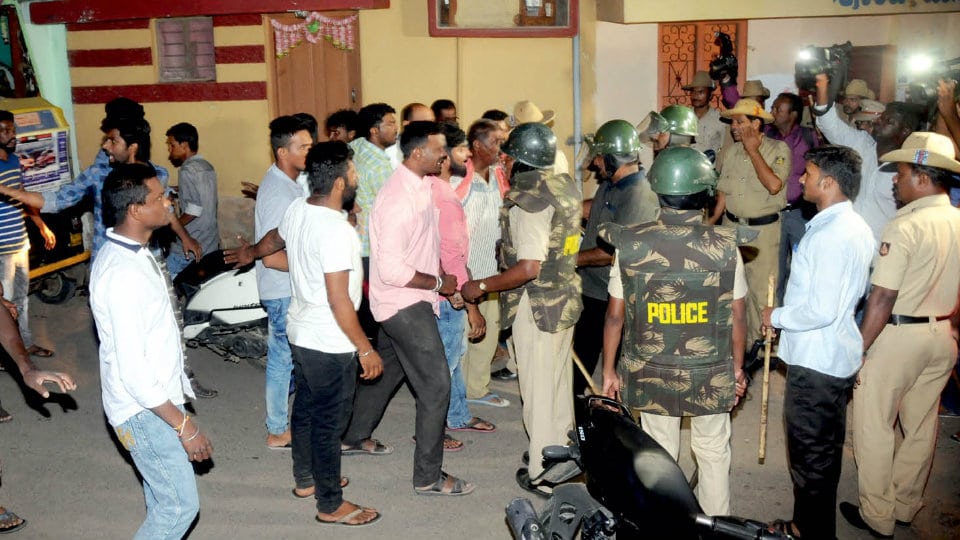 Five arrested for stone-pelting at Kyathamaranahalli

Mysuru:  In an incident that occurred close to the forthcoming Assembly election, groups clashed with each other at Kyathamaranahalli in city last evening. Stones were pelted, and over 12 persons including Vijayanagar Police Inspector Anil Kumar were injured. The administration has issued prohibitory orders under Section 144 to control the situation.

Kyathamaranahalli has always been known to be a sensitive area. Yesterday, some groups had taken out a rally to protest against rape and murder incident at Kathua, Kashmir, which has rocked the nation.

According to Udayagiri Police personnel, the trouble erupted yesterday afternoon when hundreds of two-wheelers took out a rally on Azeez Sait Double Road in Udayagiri, calling for bandh in the wake of sexual assault. Separate rallies were also held in Udayagiri limits where rallyists demanded death sentence to rapists. Some rallyists tried to force shops to down their shutters during the rally, which was objected to by people.

This gave rise to exchange of heated words between the groups. Some elders who intervened, pacified people and succeeded in sending them away, after which, youngsters forming part of the rally, rushed into nearby shops and threw away things found there. Angered by this incident, owners of the shops and some local men objected to it. 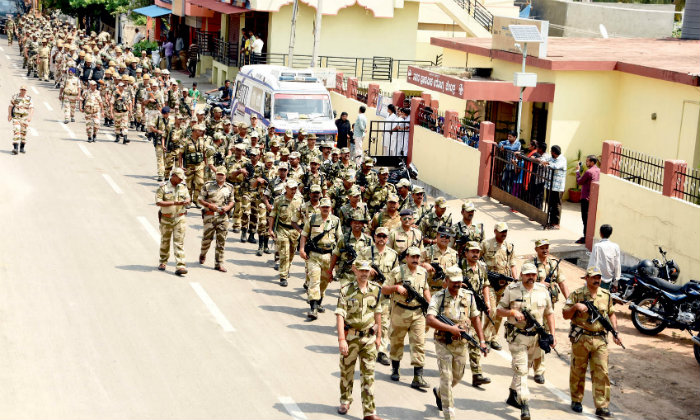 FLAG MARCH TO INSTIL CONFIDENCE: Battalions of Paramilitary Forces including the Rapid Action Force, Seema Suraksha Bal and the Indo-Tibetan Border Police that are camping in the city to maintain peace for the upcoming Assembly elections, joined the City Police and the Mounted Police Force to conduct a Flag March this morning following the incidents of violence at Kyathamaranahalli last evening. The Flag March was conducted to show the presence of the Armed Forces in the area in order to prevent further chaos by mobs. One more Flag March will be held this evening.

At this point, the situation threatened to go out of control as the groups seemed to be heading for physical fight. The Police rushed to the spot in time and dispersed both the crowds. The Police also rushed a platoon of Karnataka State Reserve Police (KSRP) personnel to the spot.

It was at that time, when inspector Anil Kumar, attached to Vijayanagar Police, who was leading the auxiliary force on foot, was hit by a stone on his forehead. Protests were held and groups roamed in the streets of Udayagiri, Kyathamaranahalli, Mandi Mohalla, N.R. Mohalla Rajivnagar, Ghousia Nagar and surrounding areas. Sensing the tense situation, the administration clamped Section 144 and chased groups who were planning protests.

The Police also resorted to lathi charge to disperse the crowd. Additional Police forces were rushed to the spot and senior Police officers including Assistant Commissioner of Police from Devaraja and Narasimharaja Sub-Divisions camped in the areas to bring the situation under control.

According to preliminary investigation, it is suspected to be a pre-mediated act as the timing of the rally that was taken out from several parts of the city coincided with the filing of nomination by Chief Minister Siddharamaiah.

City Police Commissioner Dr. A Subramanyeswara Rao said that the rallyists did not seek Police permission before taking out the procession. “Whoever takes law into their hands will be punished and action will be taken as per law,” he said.

Mysuru-Kodagu MP Pratap Simha has alleged that groups were intentionally creating trouble. Sitting on a dharna at Tent Circle, he blamed the lax attitude of the Police. He has appealed to the Police to put trouble mongers behind bars and ensure that people will indulge in electoral process in a free and fair manner.