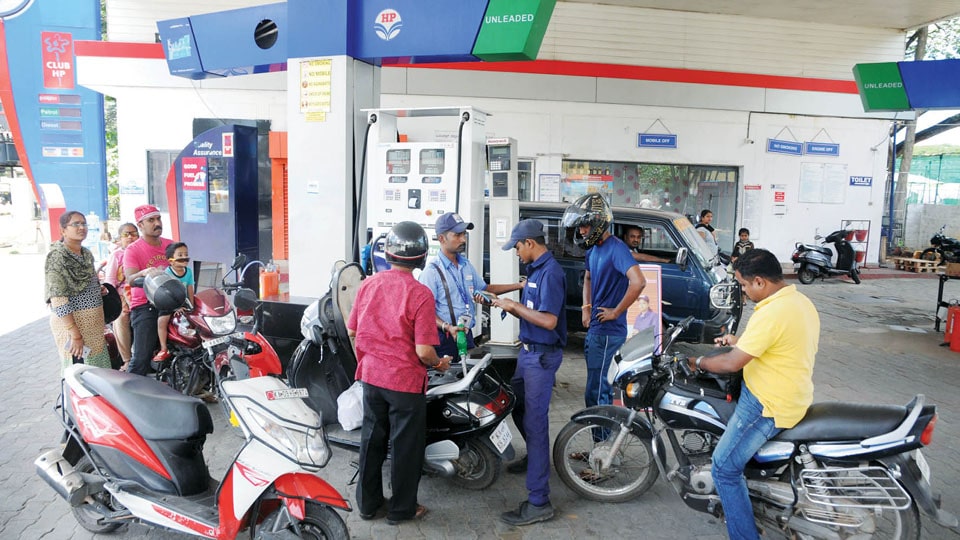 Mysuru:  Office-goers, travelling public and students in city could face a harrowing time on the first working day of the week as many services will be unavailable in the wake of nationwide bandh from 6 am to 3 pm called by the All India Congress Committee (AICC) tomorrow.

The Bharat Bandh, called by the alliance of Opposition parties and Trade Unions, is to protest against ‘price rise’, ‘fall’ of rupee against the dollar and other issues that ‘affect’ the people. With the ruling Congress-JD(S) coalition supporting the cause, the bandh is expected to cause hardship to people in Karnataka.

The bandh organisers have claimed that they have support from all the Left parties and other political parties besides Trade Unions. Pro-Kannada organisations, KSRTC Workers’ Unions have also expressed support, they claimed.

In Mysuru too, the bandh is set to hit the common man hard. Tourist and taxi, autorickshaws will be off the roads. Hotels will be open as usual as the Mysuru Hotel Owners’ Association has decided to extend only moral support to the bandh. At a meeting of the Association held this morning, the office-bearers decided not to close tomorrow as the hoteliers have already faced severe losses due to fall in tourist flow owing to floods in Kodagu and Kerala, said Association President C. Narayanagowda.

Though many educational institutions have decided to declare a holiday in Bengaluru, no such decision has been taken in Mysuru. “The Government has authorised the respective Deputy Commissioners of districts to take a call. We are collecting inputs from the Police and will meet at 4 pm today and discuss with the SP, City Police Commissioner and DDPI. The decision will be taken after considering the likely impact of the bandh,” Deputy Commissioner Abhiram G. Sankar told Star of Mysore.

“The Education Department has also made it clear to school management associations that there will not be a holiday for schools and colleges. We have asked them to wait for the communication from the Deputy Commissioner,” he added.

State buses will also remain off roads as the KSRTC Staff and Workers Association have offered to support the bandh, therefore, services by all State-run Transport Corporations including KSRTC will be hit. The Association is backed by the All India Trade Union Congress (AITUC). In Mysuru, however, there is no official communication in this regard.

The KSRTC has written to all the depot managers to ensure that no services are affected and directed to take all measures to help the general public. The circular has also advised against sanctioning leave tomorrow, barring emergency situations.

The Association of Petrol Bunk Owners have authorised the respective bunks to take a decision on closure depending on the situation. The Federation of Karnataka State Lorry Owners and Agents Association has chosen to be neutral. There may also be shortage of taxis as some drivers have also decided to support the bandh. The taxi drivers are divided over the shutdown call.

City Police Commissioner Dr. A Subramanyeswara Rao said that law and order will be under control. “People who pelt stones at public property, forcibly close shops, block traffic and create a public nuisance will be dealt with in a hard way. We have not given any permission to hold any procession. Battalions from Karnataka State Reserve Police, City Armed Reserve and District Armed Reserve and the regular Police forces will maintain order in Mysuru,” he said.