Mysuru:  Normal life came to a grinding halt in city this morning following  the ‘Bharat Bandh’ to protest the rise in fuel prices in the country and depreciation of the rupee. Congress leaders and party activists teamed up to forcibly close many shops especially in the Central Business District. The forced bandh was total.

With the ruling Congress-JD(S) coalition supporting the bandh between 6 am and 3 pm, party workers ensured that business, public transport and government offices are shut. Public transport was crippled as the KSRTC city and rural units decided early this morning not to operate services. Some taxies and autos plied as usual but the passengers were being charged exorbitantly. Train services were normal and almost all the trains were jam-packed beyond capacity.

Meanwhile, Congress workers forcibly closed government offices including MUDA and CADA-Cauvery. They even entered the MCC office where a meeting was being chaired by MCC Commissioner K.H. Jagadeesha on water problems. As the protesters tried to disrupt the meeting, Jagadeesha requested them to allow the meeting to continue and assured them that the office will be closed after the meeting. 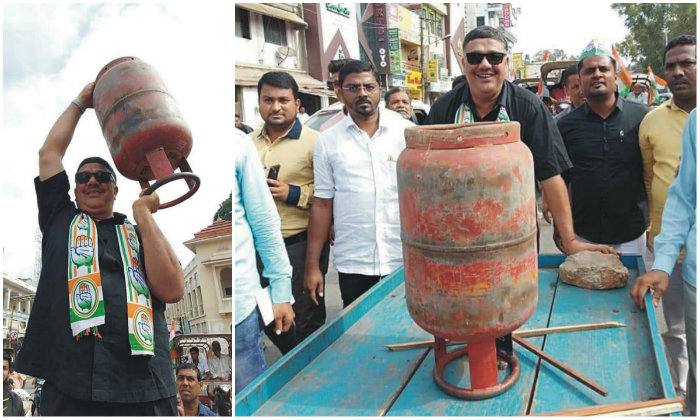 MLA Tanveer Sait, who led a demonstration at Nehru
Circle in city this morning, is seen carrying an
empty LPG cylinder to register his protest.

Elaborate security was arranged across the city by the Police to ensure that the bandh was peaceful. Except for incidents of forcible closure of shops and tyre burning, the city was largely peaceful. Sensitive areas saw maximum deployment of KSRP, CAR and DAR forces and the surroundings of Palace were monitored by Mounted Police.

Business at the city centre was shut with almost all the shops on Sayyaji Rao Road, D. Devaraj Urs Road, K.R. Circle, Ashoka Road, Makkaji Chowk, Dhanvanthri Road, Irwin Road, were closed. A few shops that were open were forcibly closed down by protesters. However, it was business as usual for shops and commercial establishments on the city outskirts. 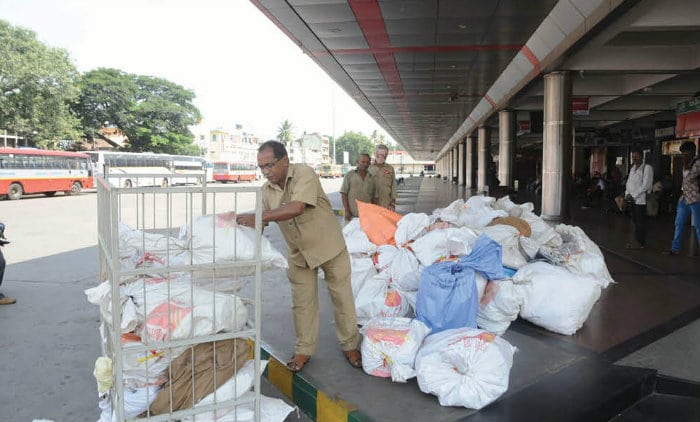 Postal staff seen collecting parcels that arrived in buses from various places in the State at the Suburban bus stand in city this morning.

All the educational institutions remained closed today as the District Administration had declared a holiday for schools and colleges last evening.

Twenty percent of the autorickshaws and taxies were on roads while all the private bus operators decided to take a day’s rest. While banks, including head offices, at the city centre closed, their branches outside the Central Business District were open.
Markets severely affected

All the markets including Santhepet, APMC Yard, Bandipalya, K.R. Market, Mandi Market, Devaraja Urs Market and Old RMC wore a deserted look with workers whiling away their time loitering around the areas. Cinema halls, multiplexes were closed while malls had thin crowds.

While the bunks within the central business district were closed, bunks in outer areas functioned as any other day. 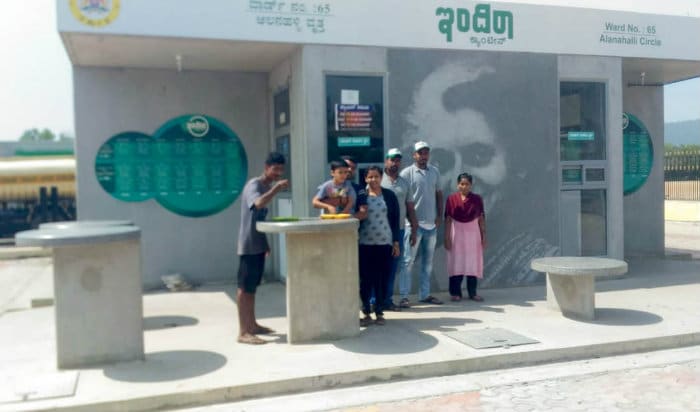 Some of the hotels remained closed in central areas. However, all the hotels outside the city areas were functioning normally. Roadside food outlets made a killing as many people and even protesters thronged them. Interestingly, Indira Canteens, the government’s flagship scheme to provide subsidised food were open.

Almost all the City buses were parked in their respective depots and they did not even enter the bus stand. Barricades were set up at the entrance of the City and Sub-urban Bus Stands and platoons of Reserve Police were stationed there to prevent protesters from entering the bus stands. KSRTC officials were preparing for the evening schedule that was likely to start at 4 pm. Rest of the transport workers were seen cleaning the bus stands as there was less crowd. Meanwhile, the supporters of both Congress and JD(S), led by JD(S) State President A.H. Vishwanath, staged a protest near Gandhi Square. 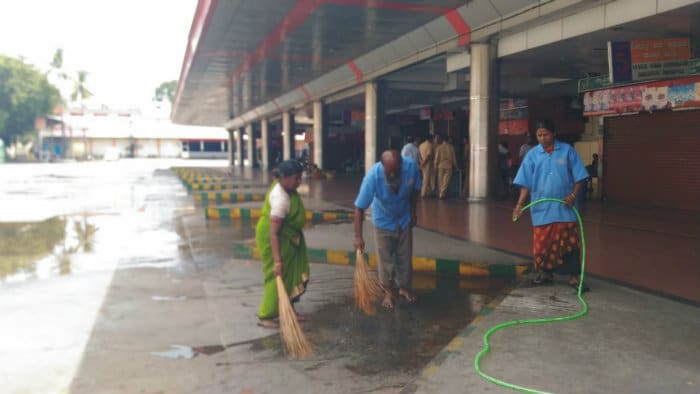 For the first time ever, the busy Sawday Road, which never used to close during any bandhs in the past, witnessed the closing of all the shops, said one of the shopkeepers, who had downed the shutters, speaking to Star of Mysore. 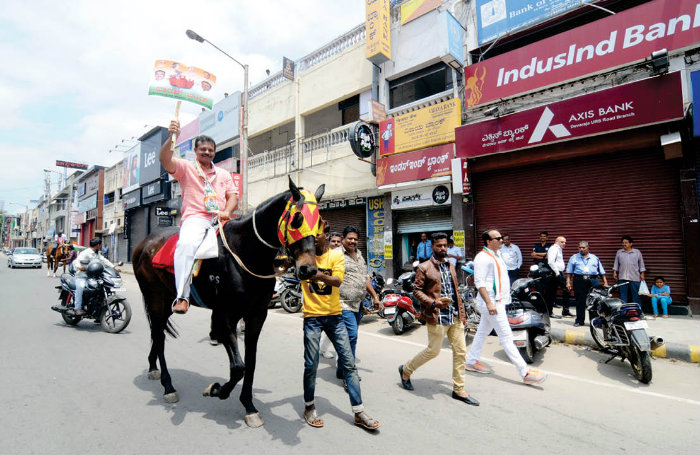 K.R. Hospital was working, even though there were less patients as bus services had been suspended. However, doctors were found attending on a few patients who had come.

The famous Mysore Palace did not disappoint the visitors. Nearly 1,300 people including 159 students, 47 children, 37 foreigners and 997 adults had visited the Palace till 12.30 pm and the number is likely to go up to 3,000 by evening, according to sources in the Mysore Palace. 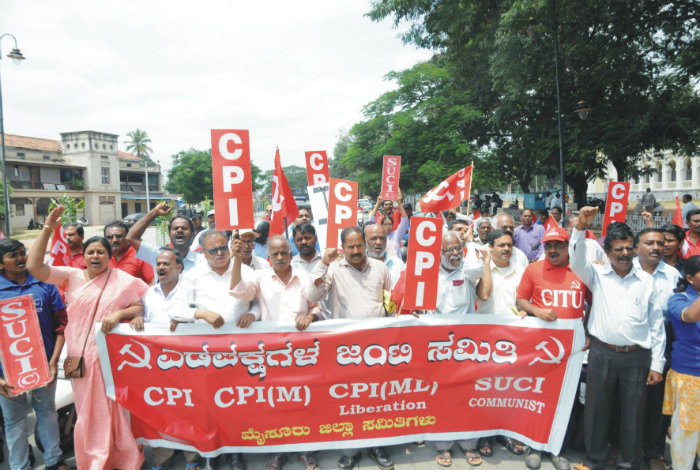 No bandh in Kodagu

There was no bandh in Kodagu as Congress decided to spare the flood-ravaged district where relief works are on.

There was a mixed response for the bandh in Mandya. While shops, business establishments, petrol bunks, buses and theatres extended full support for the bandh, many hotels were found open. 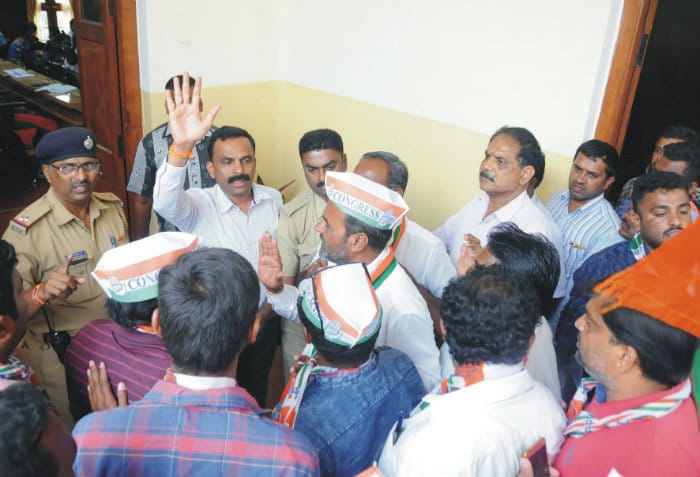 MCC Commissioner K.H. Jagadeesha comes out of the old meeting
hall requesting the Congress activists not to forcefully ask them to
close as the meeting was important.

The bandh was almost total in Nanjangud with hotels, theatres, business establishments and petrol bunks remaining closed. Buses and autos were off roads.