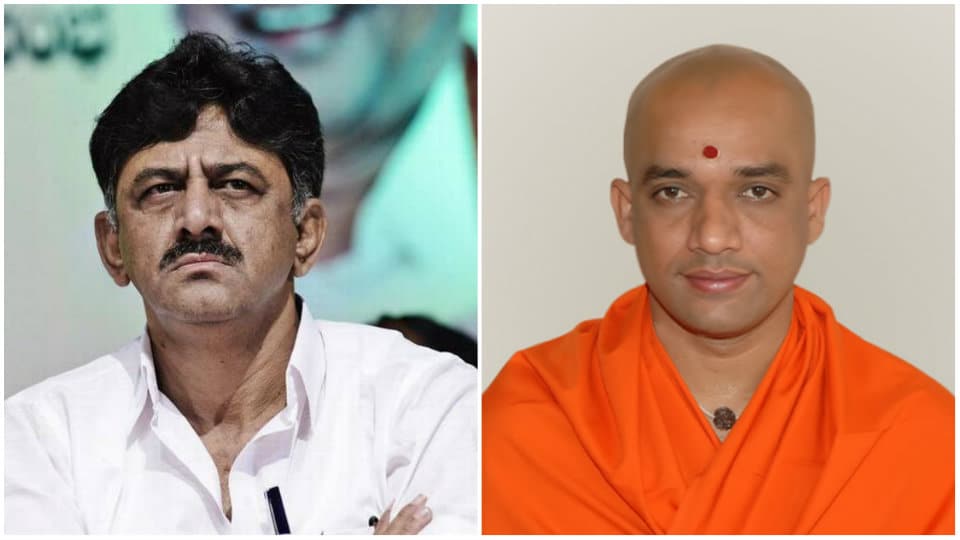 Mandya:  Congress strongman and Water Resources Minister D.K. Shivakumar, who is trying to put up a brave front in the wake of speculations of Enforcement Directorate (ED) filing an FIR any time against him in the economic offences case and his imminent arrest, called on Sri Adichunchanagiri Mahasamsthana Seer Sri Nirmalanandanatha Swamiji yesterday afternoon and sought his blessings.

The Minister drove in his private vehicle to the Mutt at Nagamangala near Mandya and was closeted with the Seer for over 30 minutes, sources said. The Seer was at the Mutt as it was Amavasya (New Moon Day). After meeting the Seer, Shivakumar left to New Delhi.

Though Shivakumar was scheduled to travel to Delhi as part of Chief Minister H.D. Kumaraswamy’s all-party delegation to meet Prime Minister Narendra Modi and seek a special package of Central aid for relief and rehabilitation works in flood-ravaged Kodagu, Hassan, Chikkamagaluru, Shivamogga and Dakshina Kannada districts, he left for Delhi separately.

According to sources close to Shivakumar, he is expected to meet senior Congress leaders and legal experts within the party Kapil Sibal and Abhishek Manu Singhvi to seek advice. In the morning, he held discussions with his legal advisers and auditors amid reports of possible summons for questioning or even arrest in the case related to the seizure of Rs.8.5 crore cash from four premises in Delhi during the August 2017 Income Tax raids.

“I am clean, I am not a criminal. I have seen many a battle and will come out unscathed in this one too,” Shivakumar asserted before he left for New Delhi to discuss with his party High Command and legal experts on his future course of action.

Referring to the speculations, he said, “I have not violated any law and have not received any notice from ED so far. I have no illegal assets. I have two houses in Delhi. I have come to Bengaluru to make it big in politics. I too am adept in playing political games. Politics is not football, it is chess.”

Meanwhile, it is learnt that former Prime Minister H.D. Deve Gowda has planned a strategy to save Shivakumar from the impending ED raids and imminent arrest. Deve Gowda is likely to meet PM Modi in this regard.

The former PM is likely to meet Modi along with Kumaraswamy and Shivakumar where the PM will be requested to save the JD(S)-Congress Government in Karnataka, sources said.

4 COMMENTS ON THIS POST To “Secret meeting of D.K. Shivakumar with Adichunchanagiri Seer”