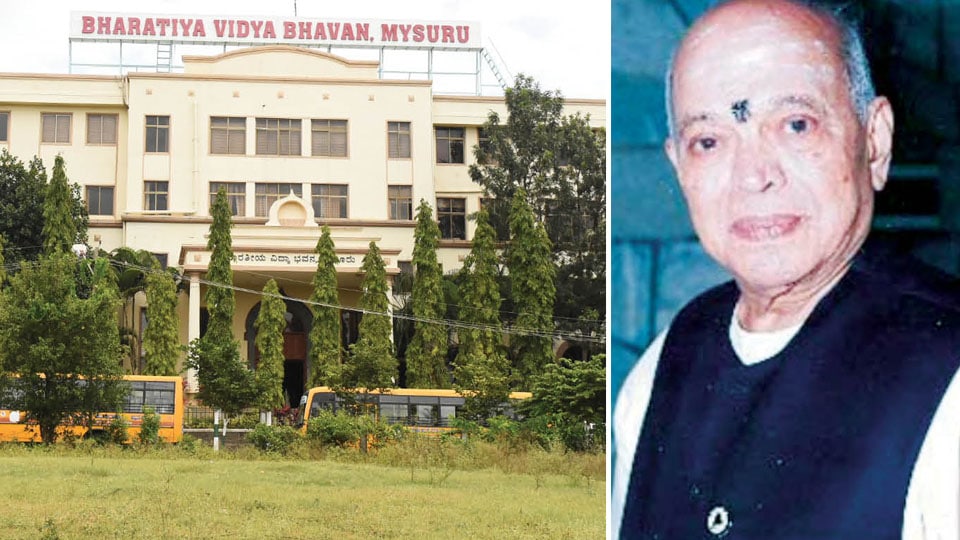 In the human garden, where flowers bloom, Mathoorji was also one; but one that was  perfumed spreading subtle fragrance.

On 25th September 2021, I had the privilege of unveiling the bust of Dr. Mathoor Krishnamurthy at the Bharatiya Vidya Bhavan’s (BVB) Sports Ground named after him, at Vijayanagar I Stage. That event sent me down the memory lane of the birth and growth of BVB  in Mysuru.

It was in 1989, BVB was established in Mysuru with the initiative of one Prof. V. Chandrashekar, I think, retired Principal of Manipal Engineering College and R. Vasudeva Murthy, President of the city’s well-known educational institution Mahajana College, Jayalakshmipuram. Srikantadatta Narasimharaja Wadiyar, the scion of the Mysore royal family, was the Chairman of the BVB by request.

As I remember, I was one of the early members of this BVB more for sentimental reason of having studied Journalism at BVB Mumbai than for any other reason. Prof. V. Chandrashekar was the Hon. Secretary and managed the working of BVB while Vasudeva Murthy was the Vice-Chairman. It was functioning in a room given pro bono by Vasudeva Murthy in Mahajana School (or College) building with a telephone, a table, a few chairs and probably an almirah. Prof. Chandrashekar was the boss and soul of it conducting some short-term courses in labour, human resources etc., for some fee. The show went on without much public exposure uneventfully.

About a decade passed in this state when this dormant BVB found Mathoor Krishnamurthy, who was in BVB London for over 23 years and had joined BVB in Bangalore Centre in the year 1995.

Chance seems to play a  role not only in an individual’s life and career but also institution’s. It was in the year 2000, Mathoorji, known for his discourses on Hindu epics, was invited by the Swamiji of Sri Ramakrishna Ashram in city to give a ‘Vaachana Vyaakhyana’ for five days on ‘Rajasuya Yaaga’ at the Ashram. He agreed. It was then he thought of rejuvenating the already existing but ‘sleeping’ BVB. No cultural activities. Only classes as mentioned earlier.

Serendipitous discourse of Mathoorji at the Ashram became very popular and thus Mathoorji himself was enthused to hold more such discourses. And BVB Mysuru became an ideal platform. From now on events moved fast.

When Priyamvada Birla (Badima) of the well-known Birla family visited BVB Bangalore, Mathoorji broached the subject of developing BVB Mysuru and she agreed to visit Mysuru. Many may not know that the born-again BVB Mysuru Kendra was born in Prof. A.V. Narasimha Murthy’s house in Jayalakshmipuram. At that time Prof. Narasimha Murthy was the Chief Editor of BVB’s Indian History volumes being translated into Kannada. He was requested to be the Chairman of BVB, Mysuru Kendra and Badima lit the lamp to inaugurate the Kendra. BVB  Mysuru Kendra never looked back thereafter.

Soon a new Committee was formed and that was when I became the Vice-Chairman and later the Chairman of the Building Committee. The present Hon. Secretary P.S. Ganapathy was also taken in as Hon. Treasurer. Other influential members were also taken as Vice-Chairmen, office-bearers and Committee Members. Soon Mathoorji’s programmes helped raise nearly Rs. 20 lakh and through membership and donation money flowed in. One of the Vice-Chairmen Prof. B.S. Pandit provided rooms in his Geetha Shishu Shikshana Sangha (GSSS) building in Siddartha Layout for BVB till BVB raised its own building we see in Vijayanagar today.

It was the time when Jaganmohan Palace auditorium was the centre of attraction for those who loved  Mathoorji’s discourse so much so Mathoorji was able to persuade many philanthropists to donate substantial amount. Mrs. Madhuri Thathachari, a resident of our city, participated in a number of cultural activities conducted by BVB and also donated a huge amount of Rs. 10 lakh in the name of her scientist-husband. Similarly, Bellur Kamalamma Subbanna and family donated Rs. 12.5 lakh. Of course, Badima donated a huge amount for the building construction.

Interestingly, the year we decided to plan and construct the building happened to be, I think, the International Women’s Year. So I suggested to Mathoorji, N. Ramanuja of BVB Bangalore and other Committee Members to entrust the designing of the building to women architects. At that time, Anu and Tara used to be one and so they were given the assignment.

Mathoor Krishnamurthy was a go-getter, he was one who would stoop to conquer. At his instance, I had the rare honour of hosting Badima in my house in Kuvempunagar where she showered me and my wife with gifts and blessings. One of the reasons (a minor one) why Mathoorji treated me with high regards could be because I was a journalist owning two local popular newspapers. And Mathoorji loved publicity. That of course is a weakness of 90% of VIPs and famous people.

READ ALSO  MCC: Are you ready for disaster management this monsoon?

Surprisingly I once casually asked him to come to my village and visit my ancestral house in Kakkabe, Kodagu. He was willing. I was flummoxed. So I requested my cousin who was the Principal of the nearby Srirama School in Napoklu to arrange for a speech and let me know the date. And Mathoorji made that ardours journey in the monsoon!

I also remember one medical  doctor Dr. S. Krishna Murthy of Nanjumalige, Mysuru. He and his wife would be attending Mathoorji’s discourse at Jaganmohan Palace regularly with great religious fervour. Dr. Krishna Murthy would address Mathoorji as ‘Swamiji’ and even treated Mathoorji like one with extreme reverence.

Mathoorji had given two discourses at Jaganmohan Palace lasting 21 days each. And it was Dr. Krishna Murthy who would drop Mathoorji  to the Bus Stand to catch the Bangalore bus at 10 or 10.30 in the night after the discourse! The kind of personal, physical trouble Mathoorji was taking was unimaginable. He would again come by train or bus next day to be ready at the Jaganmohan Palace for discourse. What a sacrifice for BVB. He was a true artiste who gets into ecstasy performing while making the rasikas, audience, enthralled.

Once Dr. Krishna Murthy invited Mathoorji for a Pada-Puja in his house. Mathoorji vehemently, adamantly refused. “I am not a Sanyasi or Swamiji,” he protested. “No Swamiji,” pleaded Dr. Krishna Murthy, “For me and my family you are a Swamiji.” Mathoorji had to yield and of course, I was to attend this event at noon followed by sumptuous lunch.

Mathoorji was made to sit on an ornate chair, his feet were lifted by hand and placed on a silver plate and the Pada-Puja began — the ritual. I was made to sit opposite Mathoorji within  earshot. As the ‘holy feet’ were anointed, washed and wiped, Mathoorji looked at me and said with a sly smile, “These are not my legs. These are not my feet” in a whispering tone. I smiled back.

In the human garden, where flowers bloom, Mathoorji was also one; but one that was  perfumed spreading subtle fragrance.