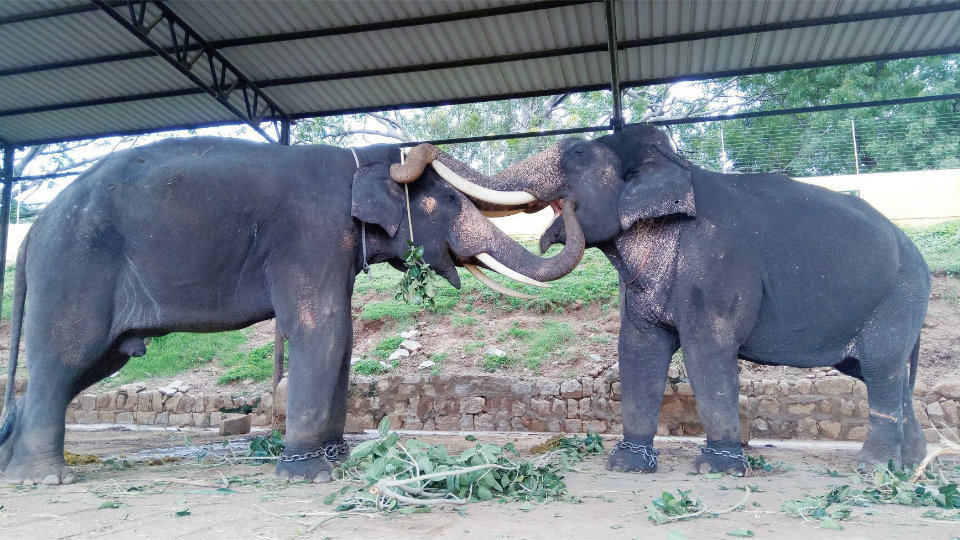 Bheema-Balarama Bonding is there for everyone to see

Elephants are known to develop strong, intimate bonds between friends and family members. There have been reports of elephants forming life-long friendships with each other. Though male elephants have a reputation as loners, wildlife researchers have observed that male elephants have best friends with whom they associate for years. Even younger males seek out older males and learn social behaviours from them.

An instance to demonstrate the friendly behaviour of male elephants can be found inside the Mysore Palace premises where the Dasara elephants are housed. The bonding between a Dasara newcomer Bheema and veteran Balarama is a special attraction for the Mahouts, Kavadis, Forest Officials and the general public.

Bheema, who is tipped to be the Tusker which will carry the Golden Howdah once he matures and is fully trained, is closely guarded by Balarama and has taken on the role of a mother and mentor. So much so is the bonding that Balarama often touches Bheema with its trunk and tusks and rubs his trunk on Bheema’s body at different intervals during the day with each grooming session lasting for a minimum of 20 minutes.

For the record, 17-year-old Bheema was separated from his mother at Anechowkur Range of Nagarahole National Park near Bheemanakatte in 2002. The wailing little Bheema that was roaming around in search of its mother was spotted by a few cowherds who alerted the Forest Department. Realising that Bheema’s mother will not take him back, Forest Officials brought him to Mathigodu elephant camp and nurtured him by feeding him milk. Gradually, Bheema recovered and adjusted to the life inside a camp.

At the Mathigodu camp, even as the Department personnel began nurturing Bheema, he found company in Balarama. The latter too responded to infant Bheema and began taking care of him. Balarama’s Mahout Thimma says that Balarama took an instant liking for Bheema and began protecting him. “Balarama is very gentle and his amiable nature has made him to take care of Bheema. Normally any other Tusker would not have done this. But a friendly Balarama is in a different league altogether,” he says.

Balarama began nurturing Bheema in his own way. Chief among the ways he used to treat the young one is that he often brushed Bheema’s body with his trunk and tusks, as if to reassure the little one that he is there to take care of him. From his fourth year till he was thirteen, it was Balarama who bonded with Bheema day in and day out. 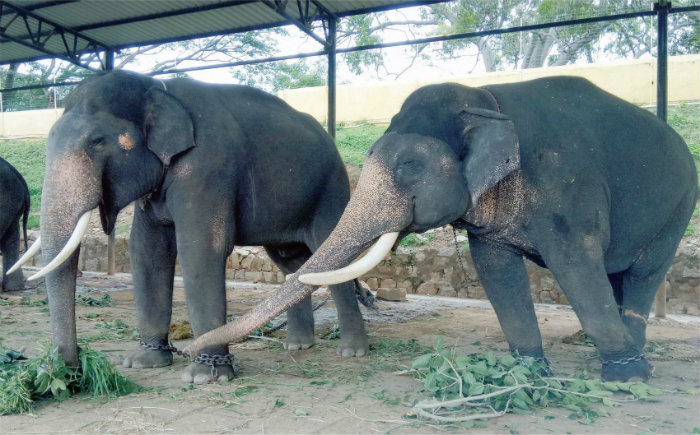 Bheema too liked Balarama and always slept under his feet at Mathigodu camp. Balarama’s Mahout Thimma says that Bheema was very naughty in his younger days and was always in a playful mood. “Balarama never used to leave Bheema alone. He would closely guard him even when Bheema was asleep. Balarama took Bheema with him to the forests whenever it was time to have some green leaves and forest roots.

Taking care of a naughty Bheema was never a problem for Forest staff, thanks to Balarama who mentored him and taught him the tricks to survive, what leaves to eat, which tree trunk has a tasty bark, etc. According to Mahouts and Forest staff, often, Bheema used to sleep inside the forest while Balarama foraged for food. And Balarama never abandoned Bheema and he brought him safely back to the camp.

At the Palace too, Bheema is tied to a pole that is on Balarama’s right and their bonding is there for everyone to see. Balarama often stretches his trunks to touch Bheema and yearning for a face and head massage, Bheema comes close to Balarama and nudges him to massage.

Now-a-days, as Bheema has reached Balarama’s height, Bheema too reciprocates with his trunk and tusks. Most of the times they are found touching each other and in a friendly move, Balarama wraps his trunk around Bheema’s head, trunk and tusks.

Elephants are well-known for their intelligence, close family ties and social complexity and they remember for years other individuals and places. Special relationships between individual elephants last a lifetime and the bonding between Bheema and Balarama just illustrates this.