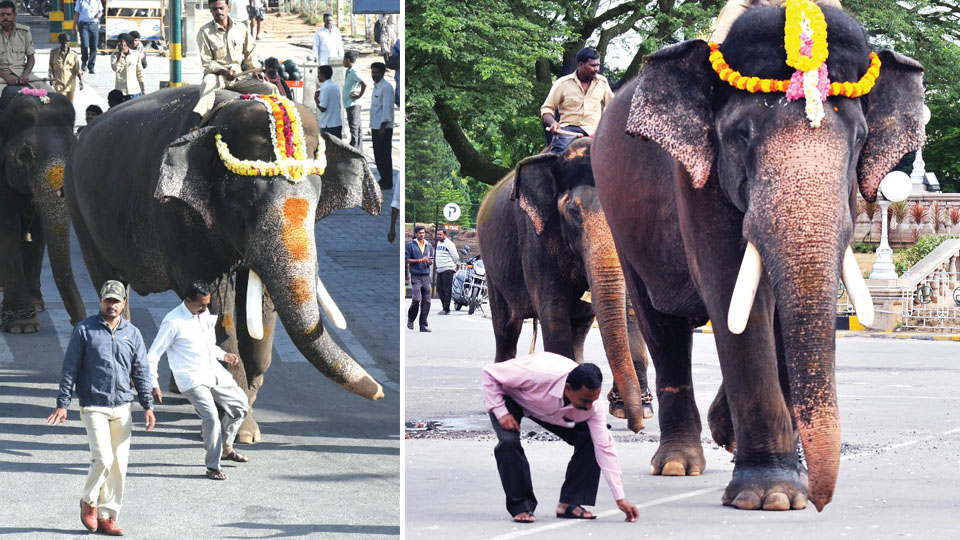 ‘Nail Man’ and his Elephants

He has been with elephants across India for the last 27 years and his dedication to the gentle giants is unquestionable. He has participated in 24 Dasaras in Mysuru and is the trusted name when it comes to the welfare of elephants. Having just a year to retire, he recounts his experience in dealing with elephants and the crucial role in making Dasara celebrations a success year after year.

Meet Rangaraju, alias “nail man” who is an inseparable part of Dasara. He is called the “nail man” as he walks in front of the elephants looking for nails, stones and other sharp objects that might potentially pierce into the legs of elephants during rehearsals from Mysore Palace to Bannimantap and also during Vijayadashami procession. 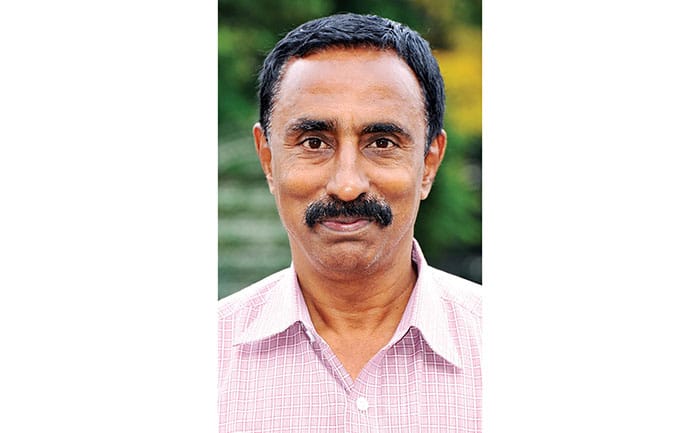 Though automated magnetic nail removal machines — either carried by forest staff or fixed into a vehicle — are now being used for the purpose, Rangaraju trusts his own eyes for the job. These machines only absorb iron nails. But to remove stones and other sharp plastic objects, the Forest Department banks on Rangaraju’s trained eyes. Out of experience, he can remove such objects from the Jumboo Savari route.

While Rangaraju is employed at the Bandipur National Park, his special duty starts from the day elephants arrive in Mysuru for the annual Dasara. He takes over the well-being of elephants and is the in-charge when it comes to elephant diet and health.

Starting his career in the Forest Department in 1990 as a temporary daily-wage worker, his name was entered officially after five months in the “cash book” in 1991 and he was put under veterinary training. In 1992, he was sent to Madhya Pradesh where he acquired additional skills to capture wild elephants and treat them in case of injuries. He was posted to Bihar and Odisha where he further honed up his skills. Over the years, Rangaraju became an expert in elephant catching operations and so far, he has caught 68 wild elephants along with a team, domesticated and trained them.

Speaking to Star of Mysore, Rangaraju says that this is his 24th Dasara and he is due to retire on September 24 or 25. “Next year will be my last Dasara and if the Department gives me an extension, I will perform my duties till Dasara 2018 ends,” he says and heaves a sigh.

Rangaraju’s hectic routine starts from the day the elephants come to Mysuru from various jungle camps. Due to high expectations from the elephants, training too is rigorous and at times strenuous. The elephants are pampered for almost two months and are put on special diet and it is ensured that they don’t fall sick. And for this, Rangaraju goes to the elephant sheds as early as 6 am to check elephant dung.

“This is the only way to see if the elephants are healthy and they don’t have a stomach upset. Out of my training and experience, I can say if the elephants are sick by looking at the dung they discharge. Any indigestion or loose motion, I immediately report to the veterinary doctor (Dr. D.N. Nagaraj who is at present the department doctor) and he instructs me to keep a set of medicines handy to feed the elephants. Based on my observations and reports, medication is done and injections are administered by the doctor,” he says.

Ask him about how he became a “nail man”, Rangaraju has an interesting story to narrate. “In 1994, during Dasara rehearsals, the then Howdah Elephant Drona’s leg was pierced by a 2-inch nail near a rain tree in front of K.R. Hospital on the way to Bannimantap. This incident happened just 15 days before the Jumboo Savari. After two days, Drona began dragging his leg and the mahout Appaji complained to me. We then took Drona to Karanji Lake and washed his legs. As I was feeling his front right leg, I found puss formation and Drona writhed in pain,” he explains.

“I immediately alerted the then veterinarian Dr.  Nanjappa. As Dasara procession, where Drona had the responsibility of carrying the Golden Howdah, was just a fortnight away, an angry Dr. Nanjappa slapped me twice and said that this was the reason why he always told me to be in front of the elephants when they march, looking for sharp objects. I learnt a lesson that day and since then I have been doing this ‘nail picking’ job,” he narrates.

Rangaraju says that immediately the puss was cleared and the nail was pulled out using a cutting plier. “Fortunately, we were able to treat Drona and make him ready to carry the Howdah. Drona too, took the incident in its stride and obeyed all instructions given to him by mahout Appaji. I can never forget the incident,” he says with repentance writ large on his face.

This is not all. Dasara elephant Shobha too had to face the pain of a nail. She was diagnosed and treated early. “Elephants spend a minimum of 50 days to two months in Mysuru and undergo rigorous training. This makes their feet wear out. As such a very small stone can cause a big injury and puss formation is easy once the leg is hurt. My job is to ensure that roads are smooth for the elephants to move,” he says.

Rangaraju takes special care of the elephants a week before the procession and once the Howdah elephant rehearses with wooden Ambari mounted on his back on top of a specially-made hay bed. “One week before the procession is the ‘Golden Time’ and every minute detail is looked into. Since four years, magnetic trolley is being used to pick nails. A vehicle mounted with this trolley goes in front of the elephants and I follow it carefully, looking for stones and plastic sharp objects that are not picked up by the magnetic trolley,” he says. Now-a-days, Rangaraju is ably assisted by Drona’s mahout Appaji. 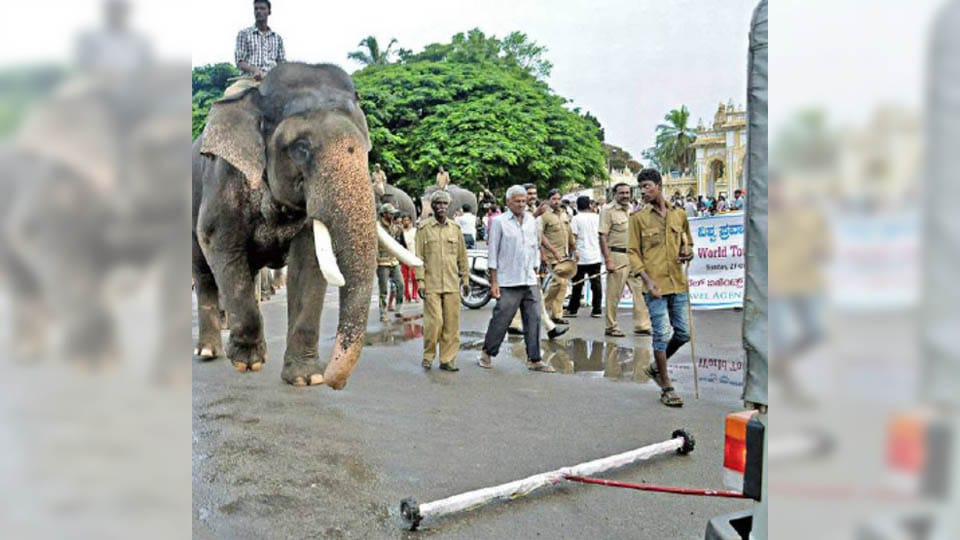 The high-powered magnetic device that is fitted into a jeep moves in front of Dasara elephants as they rehearse. The magnetic device clears the paths of sharp objects like nails, pins and metal pieces that may cause injury.

Speaking on elephant diet, Rangaraju says that he follows a rigorous and stringent quality checks. He is in-charge of rations and there were times when some unscrupulous food contractors supplied sub-standard rice, ragi, wheat, butter and pulses in bulk. “You will be shocked to hear that some people influenced me to ‘adjust’ with the substandard food items so that they could pocket huge commission from the contractors. I told them that there would be no compromise on elephant food and had even told my bosses not to allow such people near the elephants. My word was honoured and the Forest Department trusts me for my sincerity,” he says.

Among other threats to Dasara elephants when they are housed at the Mysore Palace is the fight between mahouts and kavadis. “In a drunken state they quarrel with each other and there have been cases where the elephants are victimised. There are instances where some mahouts and kavadis have fed the elephants with ‘bitter medicine’ so that elephants refuse food and disrupt Dasara. I have the responsibility of ensuring that such incidents do not take place,” he says.

Recalling his association with Howdah elephants, Rangaraju remembers working with Mahendra, Drona, Balarama and Arjuna, the present Howdah elephant. He has also worked with Srirama, Gajendra, Abhimanyu, Shobha, Varalakshmi and Kaveri. He fondly recalls Srirama, who was gored to death by Gajendra, as a good elephant.

Rangaraju does not forget to credit veterinarians Dr. Nanjappa, Dr. Chittiappa and Dr. D.N. Nagaraj. “These doctors taught me every aspect of elephants, be it food, training and medication. It is because of them I could promptly serve Dasara elephants,” he says. Making a special mention about Dr. Chittiappa who had captured more than 150 elephants for the Forest Department, Rangaraju says, “Dr Chittiappa was a very prompt doctor who had dedicated his career for the welfare of elephants.”

The only regret Rangaraju has is that his service was regularised very late. “The Department regularised my services only in 2014 and hence I will not get any increment, pension and other benefits,” he exclaims, with a worried look on his face.

Rangaraju (standing down) is seen holding medicines as a veterinary doctor administers drips to an elephant which fell sick following rigorous training during Dasara. Picture right shows Rangaraju removing a nail from the hind leg of Shobha, a female elephant. (file photos)

Any incident he feels proud about?

“Once three elephant calves were attacked by a male tiger at Ramapura range in Bandipur National Park. Forest watchers spotted the calves and they informed Dr. Nagaraj. He took me to the place and the calves were in a critical state and worse, they were separated from the herd. I expressed my reservations on their survival and it was Dr. Nagaraj who boosted my confidence. He gave me medication guidelines and I treated the calves for three months in Bandipur and I did not move from there. Slowly, the elephants showed signs of recovery and they sprang back to life after three months,” Rangaraju recounts.