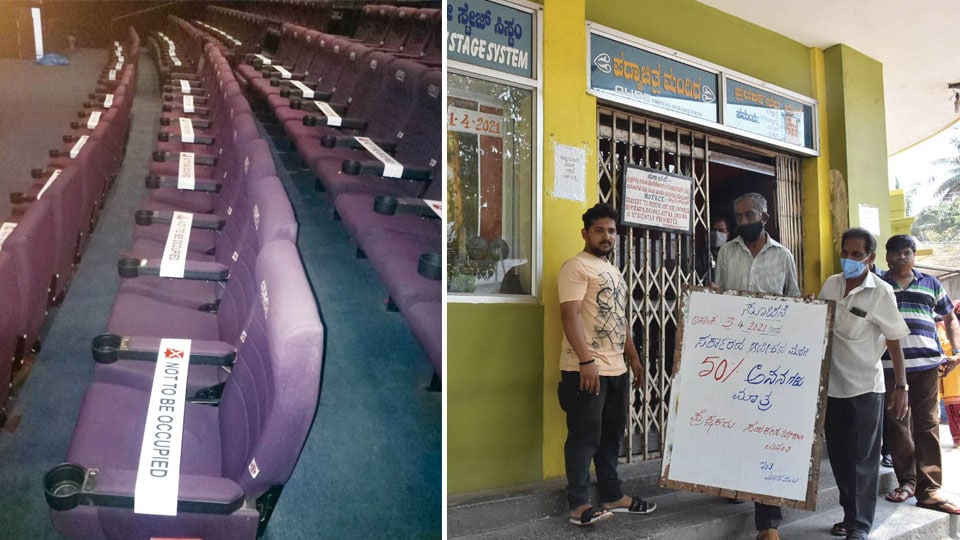 Mysore/Mysuru: The ardent movie-goers are a disappointed lot yet again as the State Government has imposed 50 percent occupancy rule in theatres and multiplexes following steep rise in COVID cases. This decision has ruffled the feathers of the film industry that was just now looking up with new blockbuster releases.

Earlier, after lockdown was lifted, cinemas were prevented from admitting audience to full capacity and restrictions like alternate row seating, mandatory sanitisation of seats after each screening and capping hall capacity to 25 percent were imposed. Later, it was relaxed to 50 percent occupancy but it was not financially feasible to start theatre operations. Many in the industry were highly sceptical about how many people will risk coming to theatres. Added to this, there were no big releases.

‘Roberrt’ and ‘Yuvarathnaa’ affected: But since a month, there have been a couple of new movie releases and preparations were on in full swing to welcome audience back to theatres. Even producers, while acknowledging they have already incurred huge losses, were thrilled at the prospect of releasing movies.

Big ticket movies like Challenging Star Darshan’s ‘Roberrt’ and Power Star Puneeth Rajkumar’s ‘Yuvarathnaa’ were released to jam-packed theatres. Even Duniya Vijay’s ‘Salaga’ is set to be released in April.

But the new curbs have come as a blow to the cinema industry. In fact ‘Yuvarathnaa’ was released yesterday and movie buffs have already booked tickets in advance. The movie has been released in hundreds of theatres across the State.

As soon as the new restrictions were announced, the Karnataka Film Chamber of Commerce (KFCC) reacted that the industry will suffer a huge blow. Even Puneeth Rajkumar, who had launched many movie-promotion events in several cities including Mysuru, appealed to the Government to allow 100 percent occupancy in theatres. The actor, in a Facebook appeal, told the Government that all COVID protocols in theatres would be followed.

“Everybody in the industry will be bankrupt now. The guideline is issued without consulting the Film Chamber. We would have stalled the recent releases if the Government had informed us in advance. The cost of running a show is the same irrespective of the occupancy at 50 percent or 100 percent,” KFCC President D.R. Jairaj told reporters in Bengaluru.

M.R. Rajaram, Vice-President of Karnataka Film Exhibitors Federation, said that the Government’s guidelines have to be followed. “We have no other go. All single screen theatres opened just three weeks back and an opportunity to run houseful has been snatched now. There is a 50 percent fall in our income. If cinemas release, then we can somehow manage but if there are no cinemas, invariably theatres have to be shut,” he said.

Meanwhile, theatre authorities have appealed to the public to bear with them in case there is some confusion regarding the already booked tickets for the movies. In a statement, the Management of DRC Cinemas, B.M. Habitat Mall, has stated that as the Government has issued emergency orders restricting the seating capacity to 50 percent with immediate effect, it has caused a lot of confusion in the bookings for Apr. 3 (today) and Apr. 4.

“We have tried to adjust the seats with bookings to the best of our ability. However, we acknowledge that there may be some slip-ups here and there due to this sudden order. Also, we request the patrons to strictly follow all COVID precautions,” the statement said.

Health and Medical Education Minister Dr. K. Sudhakar has ruled out increasing the theatre capacity to 100 percent. “There is no question of rollback and we are firm on this. These tough rules are needed to prevent the contagion from spreading. All the rules and restrictions have been imposed after consultations with COVID-19 Technical Advisory Committee,” he told reporters in Bengaluru this morning.

“We have listened to appeals of rule relaxations from all quarters. The guidelines have not suddenly been imposed and it is a measured response,” he clarified.