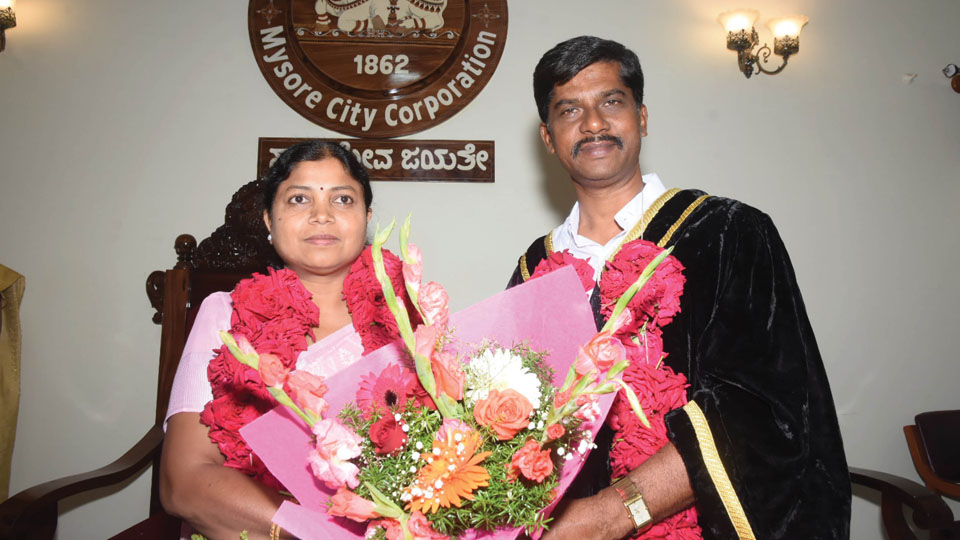 Mysore/Mysuru: Ending the suspense over the election of the new Mayor, with neither of the three major parties — BJP, Congress and JD(S) — having a majority of their own in the 65-member Mysuru City Corporation (MCC), Shivakumar (Ward 47) of the BJP was elected as the Mayor and Dr. G. Roopa (Ward 53), also of the BJP, as Deputy Mayor in the Mayoral polls held today.

The Mayoral polls held at MCC Main Office on Sayyaji Rao Road this morning took several interesting twists and turns, before Regional Commissioner Dr. G.C. Prakash, who is also the Returning Officer, announced the names of the new Mayor and Deputy Mayor.

Later, following a last minute agreement between BJP and JD(S), K.V. Sridhar of JD(S) withdrew his nomination, leaving only Shivakumar of BJP and Hasratullah of Congress in fray.

Though Congress had a vote strength of 27 votes, it bagged one vote extra, with Nirmala Harish of JD(S) cross-voting in favour of Congress candidate.

Though the Mayoral elections went on smoothly, the election of the Deputy Mayor witnessed several twists and turns coupled with high drama.

The candidature of Reshma Banu (JD-S) was rejected just before the voting began on the grounds that she failed to produce BCA certificate.

As Banu’s candidature was rejected by the Returning Officer, the JD(S) reportedly  did not favour its another candidate Nirmala Harish on two counts — Firstly, she cross-voted for Congress candidate in Mayor election in defiance of the party’s stand. Secondly, she filed her nomination paper as an independent candidate without consulting party leadership

This benefited BJP candidate Dr. Roopa, with JD(S) inevitably supporting her, though JD(S) had got the post as per the last minute agreement with BJP.

With the election of its candidate for both the Mayor (Shivakumar) and Deputy Mayor (Roopa) posts, the BJP has got a shot in the arm ahead of next year’s Assembly polls.

After voting, Regional Commissioner Dr. G.C. Prakash officially announced that Shivakumar of BJP (Ward 47) has been elected as the new Mayor and Dr. G. Roopa Yogesh of BJP (Ward 53) as the Deputy Mayor.

Shivakumar is the 24th Mayor of the city and the fourth one of the current tenure of the MCC.

Dr. Roopa, who is the lone Ph.D holder among all the current Corporators, had earned her Doctoral degree in Pharmaceutics from Bengaluru’s Rajiv Gandhi University of Health Sciences  last year.

After the BJP surprisingly bagged both the Mayor and Deputy Mayor posts for the first time, thanks to the default of the JD(S), which apparently erred in the selection of its candidate for the Deputy Mayor post, District Minister S.T. Somashekar said that Shivakumar was a three-term Corporator and very much deserved to become the Mayor.

Pointing out that though Shivakumar is from Nayaka community (ST), he was fielded for the Mayor post following directions from the Chief Minister and the party top brass.

Maintaining that Shivakumar is widely respected across parties, he said that the new Mayor is known for his simplicity and humbleness.

Meanwhile, the election of the BJP candidates for both the Mayor and Deputy Mayor posts has come as a big boost to the party and a perfect gift to CM Bommai, who is arriving in city this afternoon for taking part in a programme.