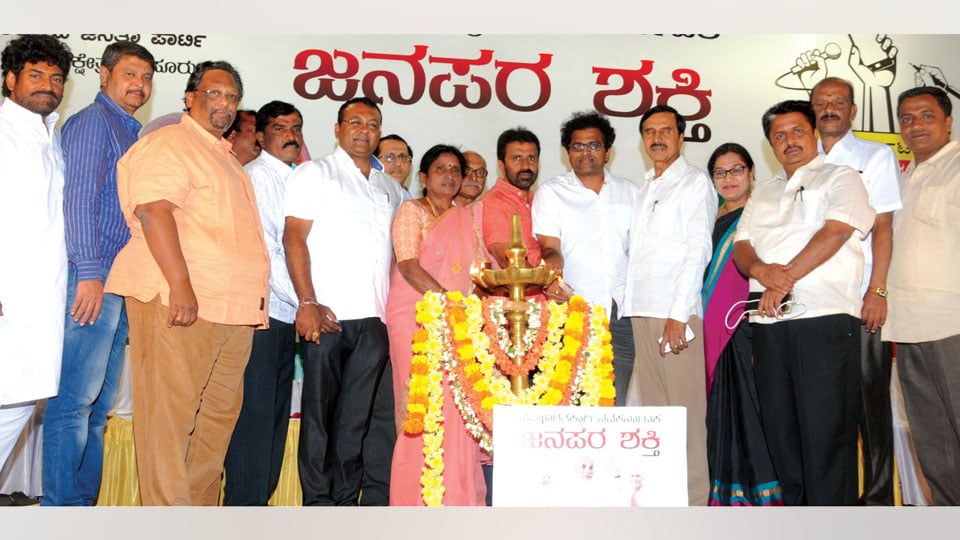 Mysuru: Navakarnataka Janapara Shakthi, a BJP forum for citizens of Karnataka to voice their opinion and help the party to bring about a change, was held at Govindarao Memorial Hall on JLB road in the city yesterday.

The programme was organised by Chamaraja Constituency BJP unit. Addressing the gathering, city BJP President Dr. B.H. Manjunath said the forum is being organised across all constituencies of Karnataka. People from all sectors are welcome to come up with their suggestions, he said and appealed the people to be a part of this initiative.

Accusing the Congress of dividing the society on caste and communal lines, Dr. Manjunath ridiculed dynastic rule in the Congress right from Jawaharlal Nehru to Rahul Gandhi. Stating that the JD(S) was a family party, he said that the BJP was free from family and dynastic politics.

Asserting that the BJP would come to power in the forthcoming polls, he said that it was vital for the party to consolidate and derive insights for bettering the constituency.

Former MUDA Chairman L. Nagendra, in his address, said that Chief Minister Siddharamaiah had done little for his home district of Mysuru.

Maintaining that farmers’ suicide and atrocities on women and weaker sections of the society were on the rise after Congress came to power, he said that CM Siddharamaiah who claims himself as an AHINDA leader, had rendered injustice to the communities and remained silent on the brutal killings of hindu activists in the State. He appealed the people to come up with their suggestions, so that the best ones can be incorporated in the party’s manifesto.

Kodava Samaja former President Cariappa, who is also the President of Deenabandhu Charitable Trust, opined that the BJP workers should make a pledge on bringing back the party to power in the State.

Nagaraj, a retired Silk Department official, stressed on the urgent need  for redressal of farmer issues, as the farming community was in distress due to crop loss and unrenumerative prices.

Rajaram, a cinema theatre owner, pointing out the taxes levied by the MCC on cinema halls was multiple times higher than that collected by BBMP, called for downward revision of taxes.

Manjunath, an industrialist, appealed for the launch of an industrial corridor linking Bengaluru with Coimbatore as such a corridor will drastically help in changing the industrial scenario in Mysuru region.