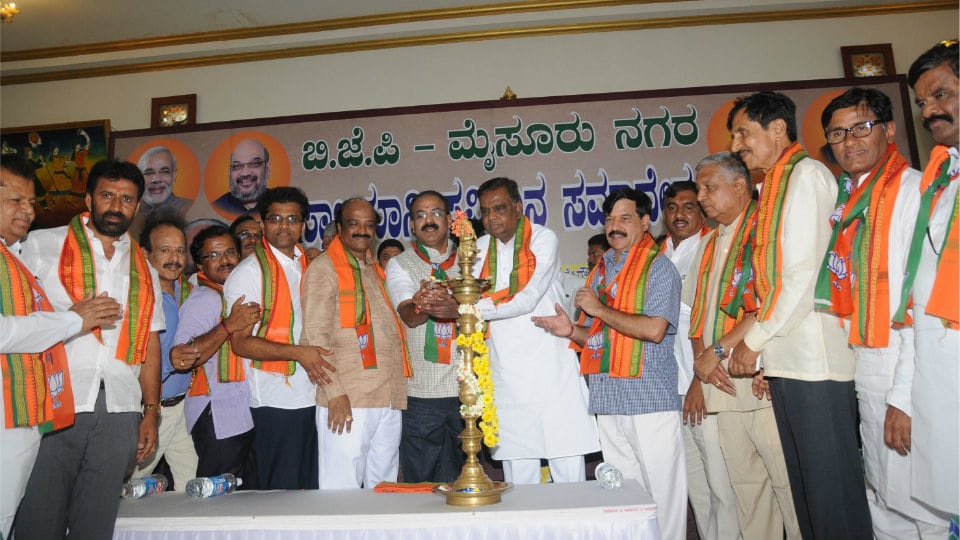 Maintaining that the Assembly results of five States is an indicator of Karnataka too becoming a Congress-free State in the next Assembly polls, former Minister and BJP leader V. Sreenivasa Prasad today said that Chief Minister Siddharamaiah himself was working in that direction.

Speaking to press persons ahead of taking part in the ‘Swabhimaani Sammilana Samavesha’ jointly organised by V. Sreenivasa Prasad Fans Association and Mysuru City and District BJP at Jayamma Govinde Gowda Kalyana Mantap in Kuvempunagar here this morning, Prasad, who is the BJP candidate for Nanjangud Assembly seat, asserted that he would take ‘political sanyas’ if he was defeated in the April 9 by-poll. 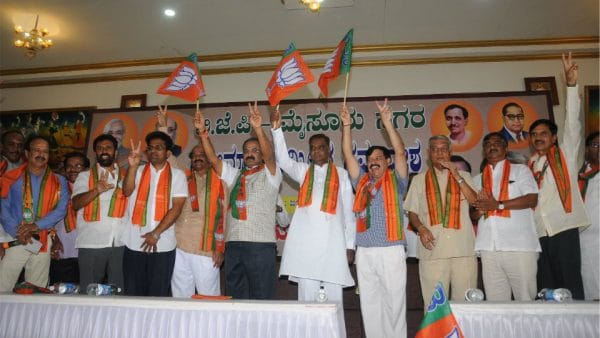 BJP leaders Aravind Limbavali, V. Sreenivasa Prasad and S.A. Ramdas seen waving the party flag during the ‘Swabhimaani Sammilana Samavesha’ in city this morning as other leaders look on.

Stating that Nanjangud bypoll was actually a contest between him and Siddharamaiah, Prasad challenged the CM if he (CM) too would take ‘sanyas’ if the Congress candidate was defeated in the bypoll. Prasad further said that scores of his followers would join the BJP at the Samavesha.

Earlier, elated over the huge victory of BJP in UP, jubilant party workers celebrated the victory near the venue by bursting crackers and distributing sweets to the people.