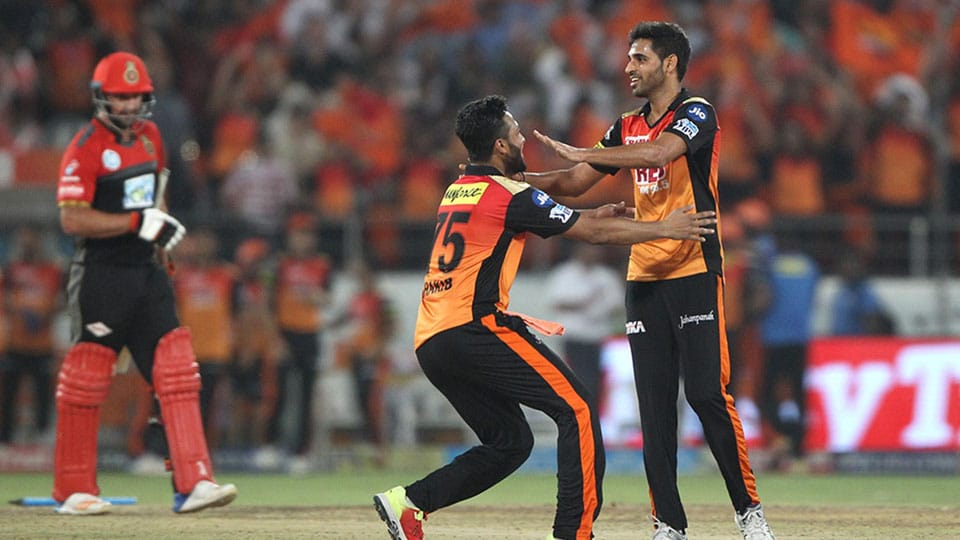 Bowlers shine as SRH beat RCB in an exciting game

Hyderabad: Table-toppers Sunrisers Hyderabad (SRH) produced yet another spirited bowling effort after skipper Kane Williamson’s crucial half-century to beat Royal Challengers Bangalore (RCB) by five runs and virtually assure themselves a place in the play-offs of the Indian Premier League on Monday night. Sunrisers not only registered their fifth consecutive win of the tournament but also defended yet another low total riding on the performance of their excellent bowling unit.

Earlier, skipper Kane Williamson struck a vital half-century before pace duo of Mohammed Siraj and Tim Southee joined hands to help RCB bundle out Sunrisers for a modest 146. Williamson scored 56 off 39 balls while Shakib made 35 but it was Siraj (3/25) and Southee’s (3/30) fiery spell that eventually put brakes on Sunrisers’ charge.

Sent into bat, Sunrisers did not have the best of starts as they lost openers Alex Hales (5) and Shikhar Dhawan (13) early. To make matters worse for the hosts, Manish Pandey (5) too didn’t last long, handing out a simple catch to skipper Kohli off Yuzvendra Chahal (1/25) in the ninth over.

Thereafter, Sunrisers captain Williamson and Shakib stitched 64 runs off just 50 balls for the fourth wicket to keep the hosts afloat. While Shakib played the second fiddle, Williamson showcased his class striking the balls to all parts of the ground without taking any undue risk.

Kane Williamson was chosen as the ‘Player of the Match.’

By virtue of this win, Sunrisers have consolidated their position at the top of the table with 16 points from 10 games.

RCB, on the other hand, are standing on the verge of elimination with just six points from 10 matches. Besides needing to win their remaining four games, RCB’s fortune will also depend on the outcome of other matches.