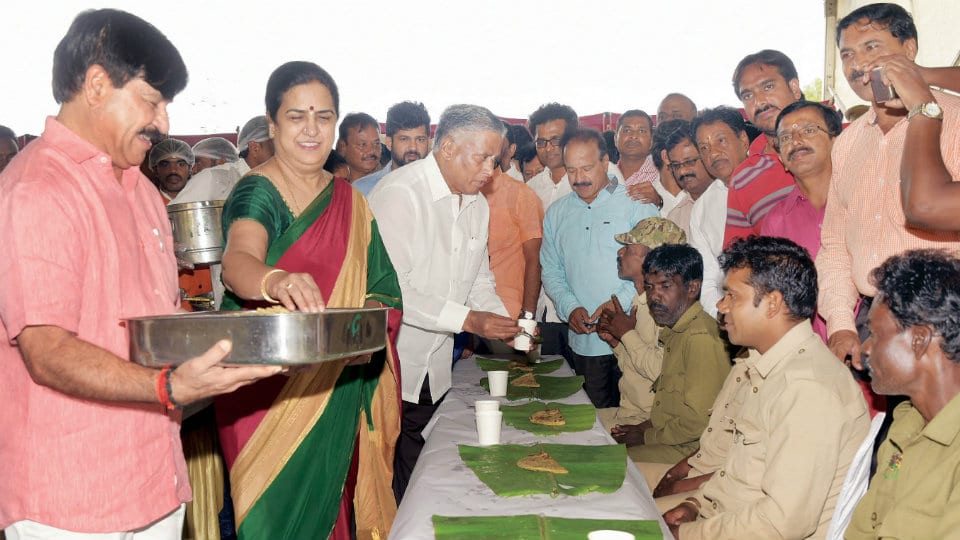 Breakfast served for Mahouts and Kavadis

Mysuru:  The District Administration had organised a breakfast for Dasara elephants’ Mahouts and Kavadis and their families at the Palace premises here this morning.

District Minister V. Somanna distributed kits containing essential items of daily use to all the Mahouts and Kavadis.

Somanna distributed Rs. 5,000 cash to each Mahouts and Kavadis, out of his Somanna Prathishtana.

The Minister also handed over Rs. 5.4 lakh cheque from Somanna Prathishtana to ZP CEO K. Jyothi, meant to be used for Raitha Dasara on the occasion.

Later speaking to press-persons, Somanna said he had asked the ZP and other authorities to estimate the cost of  transporting people from all parts of the district for Raitha Dasara. Based on the estimate by the authorities, he has given Rs. 5.4 lakh cheque out of his Somanna Prathishtana for the purpose, he said.

Pointing out that all efforts will be made to make the Dasara more inclusive, Somanna said he has directed the Forest Department to ensure that no tribal is left out on watching Dasara and the Government will be taking necessary steps to see that tribals are brought to Dasara under ‘Dasara Darshini’ initiative.

Stating that Rs. 50 lakh will be released to Mysuru ZP in a couple of days for Dasara, the District Minister said that all eight local bodies at the taluk level in the district will be given Rs. 1 lakh each for Dasara celebration.

Replying to a query on whether former CM and CLP leader Siddharamaiah, who is a native of Mysuru district, has been officially invited for Dasara, Somanna said that he has not been able to personally meet Siddharamaiah so far, but has called him over phone to invite him for Nada Habba.

Tourism Minister C.T. Ravi who also spoke to press-persons, explained the initiatives taken by his Department to boost tourism.

Pointing out that he has discussed a unique concept of introducing farm life to tourists, by taking them on bullock carts to tourist spots, he said that the Department has also come up with a plan on introducing food practices in Ramanagar district to tourists.

Claiming that he will give a new look to the Department through various measures, Ravi said that a Task Force headed by Infosys Foundation Chairperson Sudha Murthy has been constituted to boost the tourism sector in the State. He further said that he will see to it that the tourism potential of the State is fully tapped.