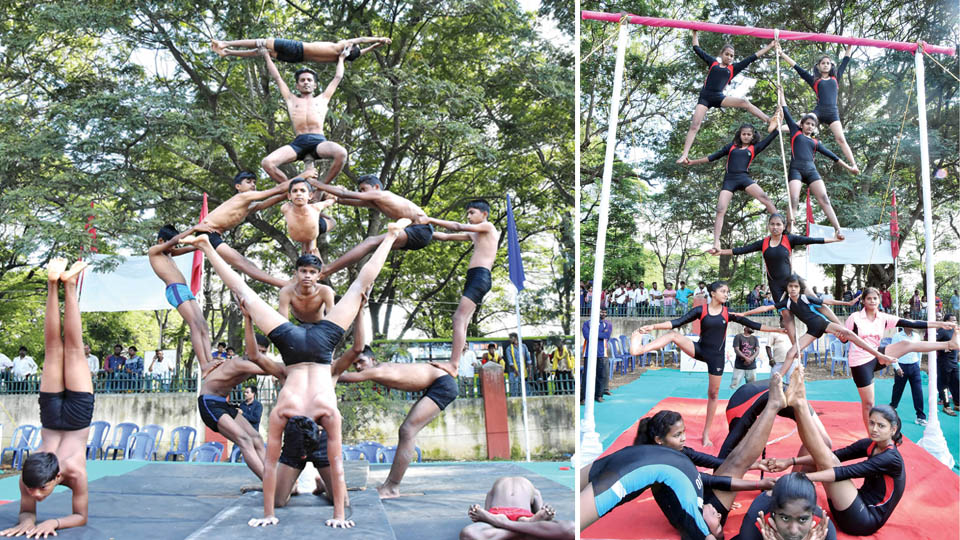 In 1936, a group of 35 acrobats left from India for Berlin to demonstrate Mallakhamba, the Indian sport that’s probably the toughest in the world. Hitler himself honoured the 35 acrobats who showcased Mallakhamba at the 1936 Berlin Olympics. He was baffled with the concentration, strength, and death-defying acrobatic antics of the athletes atop a skinny, 12-foot pole.

Mallakhamba is a traditional sport where a gymnast performs aerial yoga postures and wrestling grips in concert with the wooden pole. It is done solo or in a group. The sport involves intricate feats of contortion, strength and death-defying gymnastics atop a pole or hanging from it.

It’s done with the sheer strength of the body without the help of any protective gear. It’s unlike any other sport on the planet.  The earliest recorded history of the sport dates back to 11th century AD but historians believe it to be way much older.

First, a young chap climbs the Mallakhamba fixed onto the ground. Utilising the pole for showcasing complex calisthenics, he performs a number of acrobatic feats and poses while remaining hanging on the pole. And the audience remains spellbound, witnessing the Desi sport.

Later, a few more youngsters join him to reach the top of the pole and form a number of geometric shapes and pyramids. While 12-feet high pole might look impossible for onlookers for performing such feats and dangerous stunts, it seems cakewalk for these physically and mentally well-trained acrobats.

This year, as part of ongoing Dasara festivities, adventure sports enthusiasts of Mysuru are witnessing and are being awe-struck by the Mallakhamba event at the Eastern side of Kuppanna Park. So good is the response to the event, the organisers have extended it to Oct. 6 and if need be, will be extended till Oct. 8.

Students of Sri Hanumanthappa Udandappa Pujar Govt. High School of Thulasigeri in Bagalkot and Govt. Kuvempu Primary School Bagalkot, including 20 boys and 16 girls, are showcasing their Mallakhamba skills under the guidance of their Physical Education teacher C.K. Chanaal along with Shankara Dasannavar and Rajesh Kulkarni.

These school children can now easily perform Veerabhadrasana, Shankasana, Shavasana, Nidrasana and other complex asanas. And these students have participated in several Mallakhamba competitions held across the State.

Speaking to Star of Mysore, Ganga P. Dandina and N.S. Akshatha said that the game requires a lot of concentration and years of practice. Both of them have been practicing this sport and winning competitions since the last 8 to 9 years. “The sport helps us maintain a good physical strength and also improves our concentration,” they said.

READ ALSO  All works must be completed before Dasara-2019: GTD

Even as this traditional sport finds mention in Indian mythology, the earliest written literature mentioning Mallakhamba can be traced back to the 12th Century classic ‘Manasollasa’ (1135 AD), a unique encyclopaedic work composed in Sanskrit by King Someshwara.

The Desi sport got a new lease of life by Balambhatta Dada Deodhar, the renowned teacher of Peshwa Bajirao II during the first half of the 19th century. Later, freedom fighter Balagangadharanath Tilak played an important role in popularising Mallakhamba. Mallakhamba competitions are currently organised under the rules made by the Mallakhamba Federation of India.

Having a 6-inch knob at its top end, the 10 to 12 feet high vertical teak wood pole will be fixed at least 2 to 3 feet down to the ground with a circumference of one to one-and-a-half feet at the bottom level.

For pole variety of the event, the slippery pole, wide at the bottom and tapering towards its peak, is smeared with castor oil. This poses challenge to the participant who mounts over the tower to climb to perform numerous poses and postures, which cover various awkward twists, turns, hooks, grips, catches and hanging positions. Besides these, a number of asana postures and aerobatic feats are also performed.