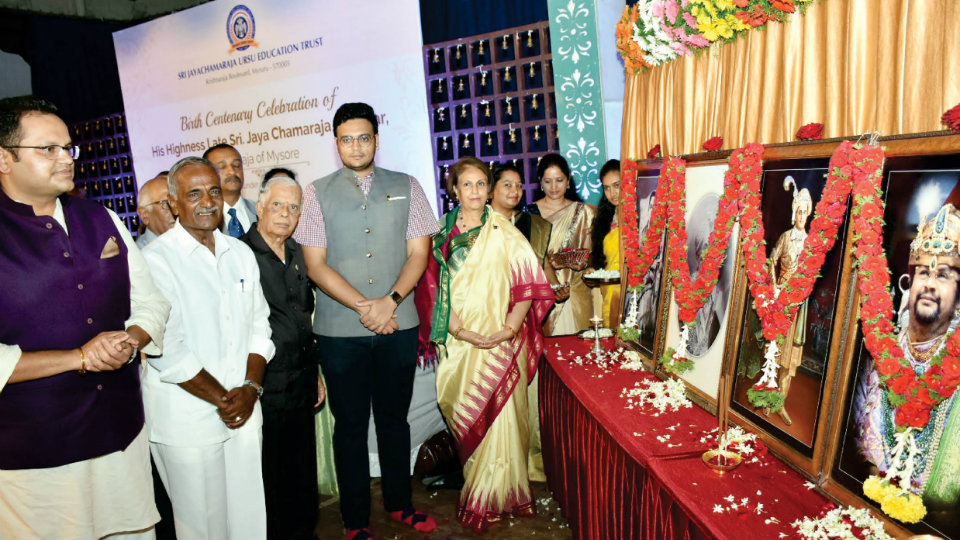 Mysuru:  “The youths of today must know about the great contributions of the last ruler of Mysore Sri Jayachamaraja Wadiyar, the multi-faceted scholar in various fields and hence it is very important to bring out a book,” said Prof. A.V. Narasimha Murthy (AVN), Chairman, Bharatiya Vidya Bhavan (BVB), Mysuru Kendra and former Head, Department of Ancient History & Archaeology, University of Mysore

He was speaking after inaugurating the Birth Centenary celebrations of Sri Jayachamaraja Wadiyar (JC Wadiyar) organised by Sri Jayachamaraja Ursu Education Trust at the Jaganmohan Palace here yesterday and said that the Trust should do this work of bringing out the book and if it is not possible for them then BVB was willing to bring out a book.

Recalling the all encompassing, compassionate nature of Sri JC Wadiyar, he narrated an incident about his concern for the common man. “Sri JC Wadiyar was in his Rolls Royce driving somewhere and found that the Railway Gate was closed. His car was stopped. Seeing the car, the Gateman was perplexed but did not open the gate. He opened it only after the train passed. Trembling, the Gateman went towards the Maharaja and told that he was just doing his job. He just asked the Gateman to come and meet him at the Palace the next day. Worried whether he would lose his job, he went to the Palace. The Maharaja appreciated his sense of duty and told him that if he had any problem in his job, he could be accommodated in the Palace to work,” said Prof. AVN, highlighting the humane qualities of Sri JC Wadiyar.

He said that the Maharaja had a special affinity with the Sringeri Samsthan and anything he did he would only do with their consent. The young Maharaja used to hold regular seminars and concerts at Lalitha Mahal Palace (which was still not a hotel then) where he would ask very good questions after keenly listening to the talks.

The President of India Dr. S. Radhakrishnan, who had taught Philosophy in Mysore University, had written the foreword for Sri JC Wadiyar’s widely acclaimed work ‘Dattatreya – The Way and The Goal,” said Prof. Narasimha Murthy and added that the Maharaja’s interests were varied as he was also involved in the Scout Movement as a boy scout.

His interest in music was legendary as he was well-versed in both Indian and Western Classical music and that is how he could compose 94 musical compositions which were dedicated to Shiva, Lakshmi and Parvathi.

Sri JC Wadiyar was always revered as God by the people of Mysore and when compared to the present day politics, he quietly merged his kingdom with the Indian State soon after independence without ever creating a problem. Thereafter though he held many gubernatorial posts, he was always uncomfortable and preferred to spend his time in solitude or with scholars of repute, said Prof. AVN.

The teachers and students of Ursu Boarding School were present in large numbers.

Earlier, a few compositions of Sri JC Wadiyar was sung by Vid. Manasa Nayana, who was accompanied by Vid. H.K. Narasimha Murthy on violin,  Vid. H.L. Shivashankara Swamy on mridanga and Vid. S. Manjunath on ghata.