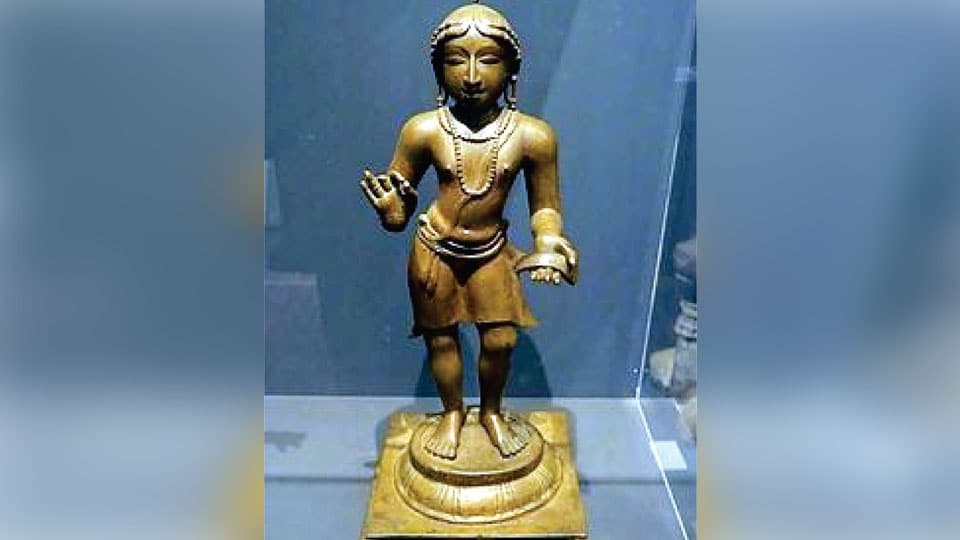 Manikkavachakar whose words are rubies

Ancient and medieval South India abounds in saints whose main concern was to guide the people towards ethical and purposeful life. Some of these saints who flourished in Tamil Nadu moved with the people of that land and also preached in Tamil language. Hence many of them are not known to other parts of India but their preachings are universal and not confined to South India alone. One such saint was Manikkavachakar. It is believed that he lived sometime between third century and eighth century AD.

In the neighbourhood of Madurai, there lived a couple Sambhupadasritar and his wife Shivajnanavathi. They belonged to the Minister’s family and the Pandya king was choosing them as his Ministers. Manikkavachakar is not the name given to the boy by his parents but it is a title. Actually we do not know the exact name of the boy but people referred to him as Thiruvadavurar (belonging to the town Thiruvadavur). He was sent to a Vedic school where he mastered all the arts including secular arts by the time he attained sixteen. Hearing this the Pandyan king appointed him as his Chief Minister and conferred on him many titles.  In the meantime, his devotion to Lord Shiva continued and he wanted to devote his entire time to the worship of Shiva, whom he considered as his guide.

One day a messenger brought the news that fine horses have arrived at an eastern sea-port. The king asked his Minister Thiruvadavurar to proceed to the port to buy the horses and asked him to take the required money from his treasury. The Minister started on his mission and a large retinue followed him. Before that he offered his prayers at the temple of Chokkanatha (Shiva). After travelling for many days he reached Thiruppenturai sea-port. At that spot he heard the sound of Vedic chanting and immediately proceeded in that direction. He was pleasantly surprised and came to a grove where he saw a guru under a sacred tree attended by devotees. They were all chanting the name of Shiva in chorus. It was not difficult for the Minister to realise that the teacher was none other than Lord Shiva. He forgot everything about horses and began reciting the praise of Shiva. The Lord was greatly pleased and gave him the title ‘Manikkavachaka’ meaning  whose words are rubies. The Minister began a mendicant’s life, spent all the money feeding the devotees and renovating the local Shiva temple.

In the meantime, the officers of the State waited for their Minister for some days and then narrated the whole story. The king became angry and asked his Minister to come back either with the horses or money. Lord Shiva told him that the horses would arrive on the appointed day (Avani Mulam). As the appointed day was nearing, no sign of horses was seen and the king became angry and put his Minister in prison. The Minister prayed to the Lord who assured that horses would arrive on that day. The horses arrived and the king was satisfied with them and the leader who brought the horses (Shiva himself) was unassuming. The king presented to him a silk scarf.

Next night a miracle happened. The horses that he had purchased became jackals and ran out of the stables creating confusion among people. The king attributed this to his Minister’s trick. After arresting and torturing him, he was taken on the hot sands of Vaigai river. There was heavy rain and the entire city was flooded. The king realised that ill-treating Manikkavachakar was the real reason behind this and requested him to bring back normalcy. At the request of Manikkavachakar floods receded.

Manikkavachakar visited many Shiva temples including Chidambaram, singing the glory of the Lord. At a place called Tiruttarakosamangai, Manikkavachakar had another vision of Shiva. During the month of Margali, he followed the singing maidens and composed Thiruvembadi. At Thirukkalakunram he was again blessed by Shiva. He passed through the streets of Chidambaram and seeing the image of Nataraja he fell into a trance and coming out of the trance he sang many poems. He emphasised the three-fold representation of Shiva. The first one is with form as in the image of Nataraja;  second is Mulasthana (original) Linga and third Akasha (ether) known as Chidambara-rahasya which has not been realised by ordinary people. It has remained as a rahasya (secret) even to this day.

Manikkavachakar took up his residence on the outskirts of the city and there he practiced Shiva-Yoga and feasted his eyes by going to Nataraja temple daily and staring at the image for hours together. At this stage he composed hymns forming a part of Thiruvachakam.  It consists of 656 verses divided into 51 sections. The other work Thirukkovaiyar consists of 400 verses.

Another miracle happened at this stage. The king of Ceylon arrived at Chidambaram hoping to get his daughter cured from dumbness. Priests of other faiths tried but failed. The priests of other religions began to abuse Shiva. Manikkavachakar unable to bear the abuse requested his Lord to make other religious priests dumb. It happened. Impressed by this, the king of Ceylon embraced Shaivism. Manikkavachakar began reciting poems and requested for a scribe. Lord Shiva himself became the scribe and recorded all his poems. It was kept in the temple and people had the good fortune of seeing the manuscript in the handwriting of Shiva himself. He preached that unless Shiva’s grace descends on the soul, it cannot become free and perfect. He said that brahmanas call it Veda; yogis call it Agama; Lovers say it is a manual for love; Logicians say it is a treatise on logic (tarka); Some others say it is a text of grammar and prosody. But I feel that these are partially correct because it is pure and unalloyed love that exists between the devotee and Lord Shiva.