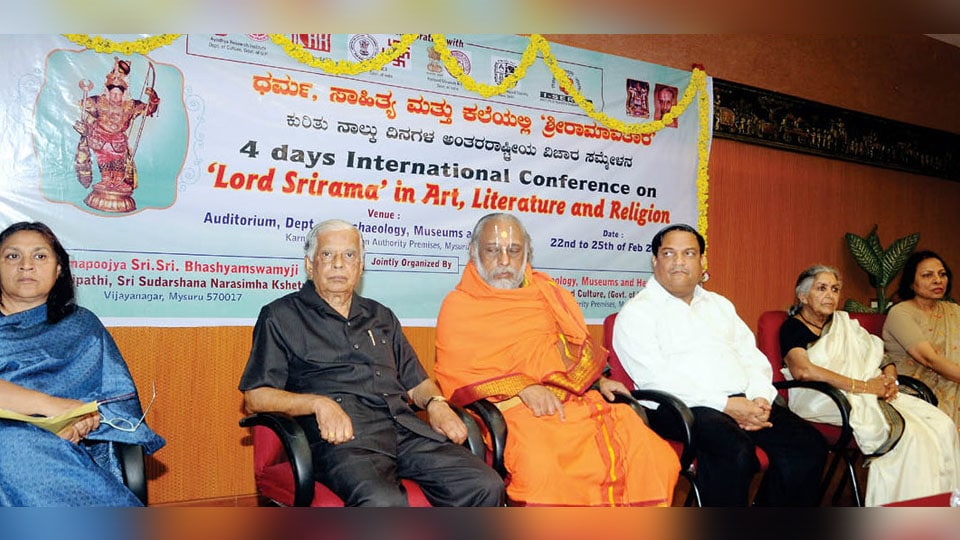 Paramapoojya Dr. Bhashyam Swamiji is a household name in city because of the establishment of Sri Narasimha Temple at Vijayanagar in Mysuru. Hundreds of devotees throng this temple in the morning because worship is done by the Swamiji himself.

Dr. Bhashyam Swamiji is unique for another reason. All of us know that Vishnu took various incarnations (avatara) whenever wicked people tormented good people. Thus Vishnu took ten incarnations like Matsya, Kurma, Varaha, Narasimha etc., and Swamiji has been arranging national conferences on these incarnations. I had the good fortune of attending them. This time the international conference was devoted to Sri Rama and scholars from all parts of India including Delhi to Kanyakumari were there to pay homage to Sri Rama. The topic was analysed from the points of view of Literature, Religion and Art. The venue was the auditorium of Department of Archaeology, Museum and Heritage at Karnataka Exhibition Authority, Mysuru. About 60 Research Scholars attended.

Many people may feel that in a secular country gods have no place in society. Mahatma Gandhi has given a fitting reply to them. Secular does not mean ‘no religion’: it means equal respect and patronage to all religions. That is why Gandhiji referred to Ramarajya as the ideal society. Even when he was shot at by an assassin he uttered the words Hey Ram.

We worship Rama as a God. Most people believe that a person by name Sri Rama lived and was elevated to the level of God by his good deeds and service to the society. He is referred to as Maryada Purushothama. Thus he was an ideal and model human being. His love and affection to his brothers has become proverbial. His wife Sita has been an ideal housewife. Such a person belongs to the entire world and not merely to India. We say that there is one concept but we refer to it as many according to our perception (Ekamsat Viprabahudha Vadanti).

Scholars have tried to fix the date of Sri Rama’s existence as 5,000 years ago. Hundreds of kings and queens have flourished during this period. Most of them are forgotten but Sri Rama lives even now in the hearts of the people. We celebrate Ramanavami and worship him, arrange music programmes and drink panaka and majjige. But it should not be restricted to that only. It should be to think of Rama and the good deeds he did for our society. The story of Sri Rama crossed over our boundaries and to South-East Asian countries like Bali, Java, Cambodia, Thailand, Singapore etc. The people of these countries learnt of Sri Rama and his good deeds and took him over to their countries. He became a celebrity and a God there.

The entire country should be grateful to the great poet sage Valmiki called adikavi (first poet) who contributed this story of Rama to the world. Even Jainas were influenced by the story of Ramayana. Buddhists also were influenced and incorporated them in Jataka Stories.

Art and sculpture are the mirrors of the society. Hundreds of temples contain the relief sculptures of the story of Ramayana. Specially the Hoysala temples are noteworthy from this point of view. However, with the development of Vijayanagar art, Sri Rama became more popular. Many archaeologists feel that Hampi area became sacred because Rama and Sita paid a visit to that place during their exile. This may be a fact or not, but the anxiety of the people to make way for Sri Rama to visit their area is unique.

Nobody can take away Hanuman from Sri Rama, his master. His nobility of character has made him quite popular even in small villages. Even a small village will have a temple or at least a huge sculpture of Hanuman. Our city also has a famous Hanuman temple at the outer gate of the Palace and devotees go to this temple for many reasons. Most people get a tayata (talisman) tied to their arm. The holy water sprinkled over the head and face of the children has been doing good to them. That is the faith of the people in Hanuman.

Archaeological Survey of India under Dr. B. B. Lal did a lot of exploration and excavation and traced the cities and towns mentioned in Ramayana. This shows that Ramayana was not a literary imagination but a fact which happened long long back. There may be some exaggerations here and there committed by the devotees. H. D. Sankalia, one of the greatest archaeologists of this country based at Deccan College, Poona, analysed the various aspects of Ramayana and opined that they are facts with some exaggerations to which people are prone to.

Character of Sri Rama at the family level is unique. Ramayana is a text book for good family life. Rama tried his best to chastise Ravana for his bad deed; but Ravana did not budge an inch and the war was inevitable against the demon. Thus it symbolises our traditional value system of punishing the wicked to save the good (Dushtasikshana and Shistarakshana). This is the message of Lord Krishna also.

South India in general and Karnataka in particular are influenced by Sri Rama. Hundreds of works based on Ramayana were composed in various South Indian languages. Kuvempu’s Ramayanadarshana and Dr. Veerappa Moily’s work on Ramayana are symbols of this excellent trend. We cannot forget Tulasidas’ Ramacharitamanasa. Ramatanka is another unique practice. It is a token and kept for worship in traditional homes and Ramatanka is given as gifts to friends and relations on auspicious occasions. All these show that though Sri Rama is said to have lived long long back he is relevant even to this day. That is the greatest contribution of our culture in general. This is bound to continue for thousands of years in future.