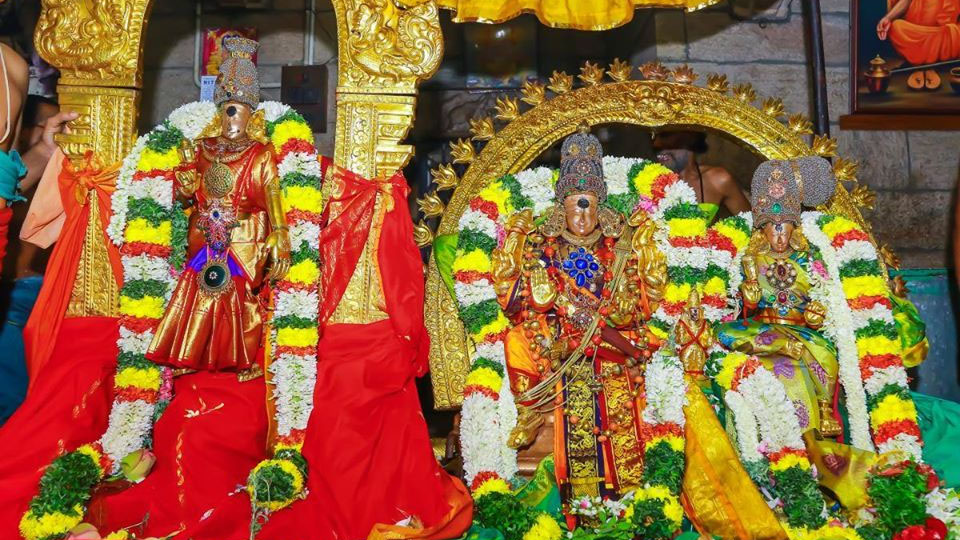 About fifteen years ago, I was invited to attend a national seminar and present a paper. As Madurai was far away and involved long distance travel, I was reluctant to go to Madurai. However, as I had not seen the famous Meenakshi temple, I went to Madurai.

Having gone there it was very difficult for me to reach my lodge because all the roads were full of cars, lorries and city buses. I asked a person as to the cause of this rush and that person replied that Dr. Subramanian Swamy, a Member of the Parliament was addressing an election meeting in chaste Tamil. Though I could not understand his Tamil speech fully, I appreciated the applause of loud cheers and felt that Swamy was a great orator.

I left the election meeting and went to Meenakshi temple. The temple was practically empty and the priests were not there. Obviously, they had gone to hear the speech of Dr. Swamy. I waited for about an hour or more and the priests returned to the temple. They were amazed that I had not gone to hear the speech. They practically looked at me with contempt. But I was helpless.

Then I went into the Meenakshi and her consort Sundareshwar temple; the priest performed puja and I took the prasadam.

There was a guide and I hired him to take me round Meenakshi temple. He explained that Madurai is in Tamil Nadu and situated on the right bank of River Vaigai. He said that this temple has ten tall temple towers (gopuras) and among them the tallest is about 46 meters. One of the attractions of this temple is a hundred-pillared enclosure (mantapa). It was built by the first king Viswanatha Nayaka of the Nayaka dynasty. This temple is built in Dravidian style and  famous for huge sculptures and minute carvings.

In addition to this temple, there is a Palace built by king Thirumala Nayaka in 1863. There is a tank (teppakolam) where during the nights, the processional images of Meenakshi and Sundareshwar are taken round in the tank. Devotees throng this place to see this Teppotsava.

Though this place became famous because of Meenakshi temple, it has a hoary antiquity. Its antiquity can be taken back to the Sangam period which may be dated to the early centuries of the Christian era. It was the capital of the early Pandyas in 150 AD. Many great kings like Nedunjalian and others ruled from this city. Thus it was a rich city with rich merchants.

Madurai was also a great centre of education consisting of Mutts, Agraharas (where well-educated Brahmanas lived), Ghatikasthanas (Centres of higher learning like our modern day colleges etc). As was the practice in those days, these educational institutions were patronised by kings, queens and rich merchants. There was a Tamil Academy at Madurai to which people from far and wide came and participated in the traditional discussions. This gave encouragement to the authors to compose works like Shilappadikaram, Manimekhalai etc,                                                            which were written in classical Tamil.

Of these Shilappadikaram is very famous. It is a Mahakavya. This work Shilappadikaram describes in graphic terms the story of Kovalam and Kannagi. Kovalam stole the Kankana (bangle) belonging to the Pandyan queen. On this ground the king ordered that he be beheaded. Though Kannagi proved the innocence of her husband Kovalam, he was beheaded. Later, the Pandyan king also committed suicide because he had killed an innocent person, Kovalam. Then Kannagi cursed that Madurai city be burnt. To commemorate this great tragedy and the innocence of Kovalam, a beach was named after him.

With all these tragedies, Madurai city continued as the capital of the Pandyas. The Pandyan kings ruled at Madurai from 6th to 9th Centuries AD. However, Chola king Parantaka invaded Madurai and it came under the Cholas. It was a wide kingdom during that period.

Due to the invasion of Malik Kafur in 1310 AD, it was partially destroyed. Muhammad Tughlaq destroyed it again during the period 1335 – 71 AD. Madurai Sultans ruled over Madurai. In 1370-71AD, Commander-in-Chief of Vijayanagara namely Kampanarayana defeated Madurai Sultans and established the Vijayanagara hegemony. They appointed their subordinates as rulers of Madurai. Among them most distinguished was Thirumala Nayaka who ruled during 17th century AD. Then it came under the control of the Marathas. In 1801 AD, it came under the British.

In spite of all these invasions, Madurai had a peaceful time and Jains built many Basadis. Jain monks were living here peacefully. There are many caves here where there are inscriptions along with Jain sculptural panels. All these happened in about 8th century AD.

Basically, Madurai city is famous for many ancient temples. The most famous of them is the Meenakshi -Sundareshwar temple. In fact, Madurai has become a temple city. It has many prakaras and it has become a temple-complex. Saints like Sanbandar (7th Century AD) and Sundarar (8th Century AD) have composed poems in praise of Meenakshi and Sundareshwar.

The four gopuras are very famous and are in South Indian style. There are many stucco panels depicting the various stories of Shiva. The thousand pillared mantapa has hundreds of beautiful sculptures. Alagar temple is dedicated to God Vishnu. This reflects the harmony of Shaiva and Vaishnava faiths. There is also a Palace built by queen Mangamma. And it now houses relics connected with Mahatma Gandhi.

Thus Madurai has become a holy place for the devotees. With all these developments and problems, Meenakshi-Sundareshwar are blessing the devouts. Let us invoke their blessings for ourselves and for the society.