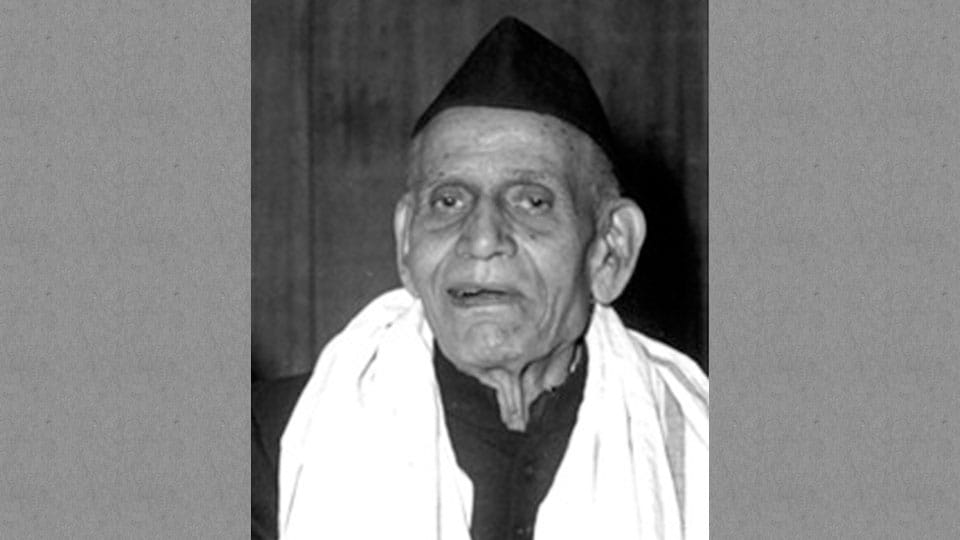 Shankara Baladikshita Joshi (1896 – 1991) was one of the greatest scholars who delved deep into the prehistory of Kannada language. At a time when the antiquity of Kannada and its environs were not clear, Joshi chose this difficult aspect of Kannada language as his main interest.

In the bargain he also discussed the meanings of different forms of the word Karnataka by which form it was known to our ancient people. These are difficult paths to choose and scholars dreaded to enter into it. But like a lone ranger, Shamba went deep into it and became successful and won the admiration and respect from scholars. As this is not a popular ad eye-catching field of study, Shamba is known only to scholars and not to masses.

Shamba Joshi as he is popularly known was born on 4-01-1896 in a small village Gurlahosur in Savadatti taluk of Begaum district. This village is not in existence now as it was submerged under the waters of Malaprabha. In the floods, his house was also washed away and hence the family shifted to Poona, the place of his grandmother. It gave him an opportunity to meet Lokamanya Tilak and he became a freedom fighter.

After sometime, he returned to Dharwad and became a trained Kannada teacher and got a job in Chikkodi. When Gandhiji visited Chikkodi, he enlisted himself as a volunteer, and began wearing Khadi. For this act, government began harassing him and consequently he left the job. He became Secretary of the Karnataka Unification movement in 1924. He was arrested and was sent to jail for six months. Subsequently, he joined as a teacher and worked from 1928 to 1946, and finally he retired.

When he was participating in the Karnataka unification movement, he acquainted himself with Alur Venkata Rao’s book ‘Karnataka Gathavaibhavagalu’. He was inspired by this book to go deeper into the antiquity of Kannada and Karnataka. His main questions were: What is the meaning of the words Kannada and Karnataka? When did they come into existence? Who were the people who lived in Kannada land? Where did they come from? Did the mention of Cauvery, Godavari in Kavirajamarga has any historical basis? These questions came to his mind. He dedicated himself to find out the answers to these questions throughout his lifetime and enriched the Kannada language.

As a prelude to his research, he wrote a book Kanmareyada Kannada (disappeared Kannada) and identified Narmada – Godavari region as the original Karnataka, which in course of time was lost to Kannadigas. Most scholars have agreed with his opinion. Thus, he laid firm foundations for the study of a wider Karnataka, than what we have today.

Another startling discovery he made was about Maharashtra. He made it clear that Marathi is of recent origin as compared to Kannada. Marathi is Marahatti which means people who worshipped the goddess tree. Hatti is a Kannada word and obviously people who lived in Karnataka area from the Vedic age were these people of prehistoric character. Thus they are the original dwellers of this area up to Narmada and migrated to that area in later periods, and became known as Marathis. It is very interesting to note that some of the Marathi scholars have agreed with this opinion of Shamba Joshi.

Shamba always goes to the root of the problems to understand their significance. In fact he has written a book on old habits or traditions with historical leanings. Look at this humorous example, Stitching needle had not yet been discovered and the ancient Brahmanas used only unstitched clothes like dhoti. Even images of gods and goddesses were made to wear the unstitched clothes. But when the needle was discovered, they did not use the stitched clothes and looked at them as un-Indian and non-traditional and never used them even in their day-to-day life also. Thus he ridicules this practice which has no meaning.

Character of gods and goddesses

Shamba has also discussed the antiquity and character of gods and goddesses such as Shiva, Krishna, Vittala, Hanuman and others. He considers Shiva as Non-Aryan and Pre-Aryan and considers him as a pro-Kannada God. Virasaivism is the culmination of Saivism of the early period. He feels that the existence of number of Shiva temples in Karnataka should be traced to the origin itself. He further feels that god Vittala is a Kannada deity and this culminated itself in the temple at Pandharapura. Kanhadaho Vittala means Vittala is a Kannada deity. Most scholars have accepted this opinion, though Pandharapura is situated in Maharashtra now. He strongly feels that Hanuman is again a Karnataka deity.

Shamba’s magnum opus is ‘Karnataka Samskritiya Poorvapithike’ which won him the central Sahitya Academy Award. I had the good fortune of meeting Shamba twice. In fact, I had reviewed his book Poorvapithike at the instance of Dr. Mallepuram Venkatesh, now the V.C. of Sanskrit University. I had pointed out one flaw in his methodology namely his weakness in prehistoric archaeology. When I pointed out this to him, he said ‘young Professor! Archaeologist is a like a magician who brings out ancient relics from the earth. But a man of literature cannot do it’. How true it is. Shamba’s books read like books on metaphysics and hence difficult to digest. That is his strength and weakness too.