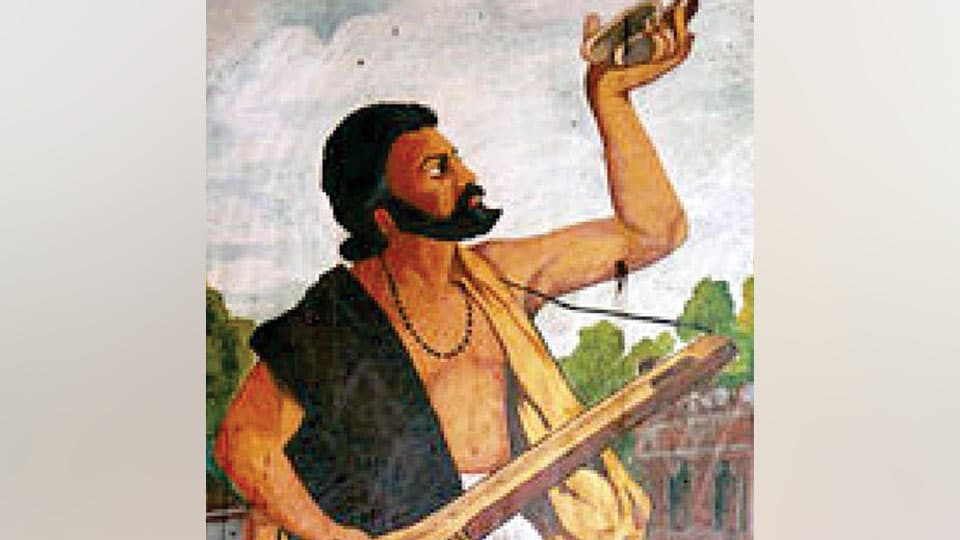 Karnataka is known for Saints who preached devotion irrespective of caste and community. They preached devotion towards Hari or Narayana in Kannada language so that it could be understood even by an illiterate person provided he had devotion. Saint Kanakadasa is one among those saints. Kanakadasa and Purandaradasa were contemporaries and the influence of the latter can easily be seen in the teachings of the former. He lived during 1509 to 1607 AD.

In most of the poems, Kanakadasa has praised God Beeradeva. Hence many people feel that he was a Kuruba or shepherd by birth. Though he was a chief of the Bedas, he was defeated in a battle and practically lost everything. At that time wisdom dawned upon him and he gave up everything to become a Saint.

He was always against caste system and believed that this system has spoiled the socio-religious life of the community. This is reflected in the famous poem which starts with the words do not quarrel over the caste system (Kulakulavenduhodedadadiri…). Caste is a major cause for all ills of our society and this has hampered our socio-economic and religious life. Though Kanakadasa preached this about 500 years ago, we are yet to come closer to this great ideal.

In Tallanisadiru Kandya Talu Manave, he preaches that one should have patience and also faith in devotion. It means ‘Oh, mind do not worry because God is there to protect everybody.’ This shows that Kanakadasa was a great optimist.

We find in all his poems devotion to almighty, philosophy of life and practice of social practices. This can easily be compared to Vachana literature of Basavanna and others. Thus the whole thrust is reformation of the society. These poems are known by the name Mundiges. It is difficult to understand the literal meaning of the word.

Kanakadasa wrote many poems which are great contributions to Kannada literature. In the work Mohanatarangini which has 48 chapters (Sandhi), Kanakadasa describes the killing of Shambavasura and Banasura, the two demons who were tormenting God-fearing devotees.

Kanakadasa considers the killing of two demons in one poem. In the same poem, Pradyumna has a great role while in the latter portion Lord Sri Krishna becomes more important. In another poem the love between Usha and Aniruddha appeals to most of the people.

Kanakadasa portrays in this poem his knowledge of warfare. This is symbolic of the war between the demon and the Almighty. Thus in this work the devotion to Hari (Haribhakti) is portrayed in an unusual manner. In most of these descriptions, the present day society is reflected. In his own words these show the mould of Harisharanas (devotees of Hari), Budhajanarigepecchu, which means intelligent people will become dull before these poems.

In the work Haribahaktisara, one can find a full blossom of devotion to Hari. In this work, each poem contains the word nammananavarata which means let Hari protect all of us forever. It contains 110 simple poems.

The other work Nalacharitre gives solace to both the youngsters as well as the old people. In nine chapters the story of Nala is told in a subtle manner and the supremacy of truth is established. One should not abandon truth at any cost because the entire world stands on truth.

This reminds us of Gandhiji’s experiment with truth. Even Bhagavadgita harps on this point. Kanakadasa laments on the difficulties Nala Maharaja had to face and this is due to the act of Kalipurusha. Anybody who reads about the difficulties which Nala had to face will definitely feel sorry for the plight of Nala. In addition to this his wife Damayanthi also had to experience difficulties at its worst. Thus by these qualities such as easy style, good contents, and apt descriptions these poems have become popular.

Another work Ramadhanya Charite though short in size, its contents are noble. It is an argument between rice (raw) and ragi. To test them Sri Rama sends them to prison. After Sri Rama returned from Ayodhya, he calls both of them to appear before him. When it was examined, rice was spoiled but ragi was quite good. Hence Sri Rama, however, honours ragi by giving the title Raghavadhanya (Raghava is the name of Sri Rama). This symbolically confirms that ragi is the staple food of the common man while akki (rice) is generally used by rich people. Thus Kanakadasa takes the side of poor people as he was the champion of the poor and down-trodden. Perhaps this work, Ramadhanya Charite had its roots in folklore.

Narasimhastava is another work by Kanakadasa. It was written in Sangatya metre in Kannada. This is a unique metre in Kannada. Works of this metre are rare. Unfortunately, this work is not available. Thirukanakanasu is another poem attributed to Kanakadasa. But there is no certainty in this because it has been ascribed to another poet Muppina Shadakshari. Thirukanakanasu is a popular poem and its contents shows how a Thiruka (poor person) reacts in a peculiar way as if he had received lot of money and properties.

Kanakadasa has been greatly influenced by our epics like Ramayana, Mahabharata, Bhagavadgita and other Kannada works. The expressions of devotion, knowledge, abandonment of worldly pleasures have made him a great devotee of Hari. He occupies a unique place among the devotees of Hari. Let us follow his ideals.