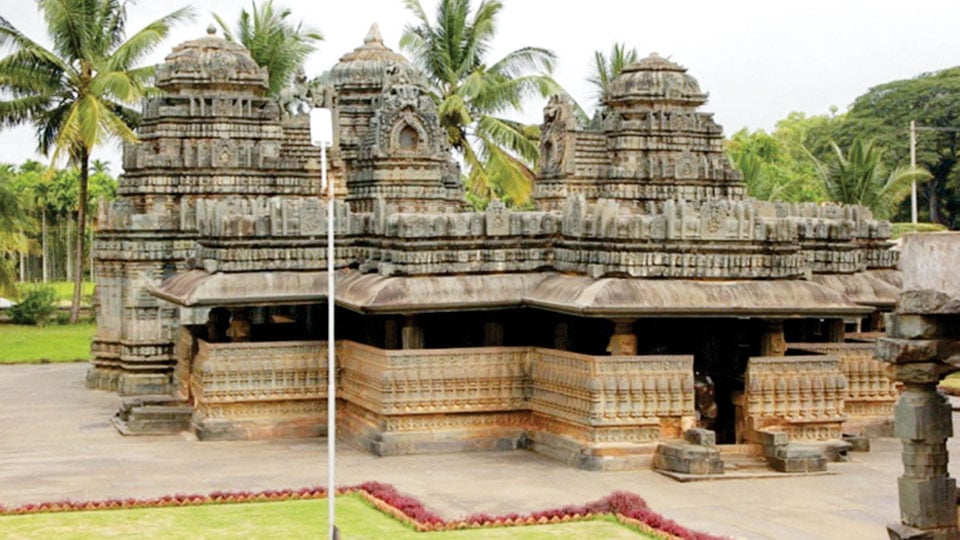 About ten years ago myself and my friends planned to visit some interesting places in Shivamogga town. It was also our desire to visit Bharatiya Vidya Bhavan, Shivamogga Kendra. We learnt that Balligave is very near and hence we visited Balligave and saw the temples described below.

Balligave is a city located in Shikaripura taluk of Shivamogga district. Balligave is now known as Belagami. It was known by different names in the ancient past such as Valligrama and Balirajadhani. Its ancient prosperity is attested to by more than one hundred and twenty inscriptions on stone and copper plates. One can also find the vestiges of parts of ancient temples such as pillars, broken sculptures and the like. All these broken parts of the various temples reminds any visitor regarding the ancient glory of this ancient city, Balligave.

Balligave has a mythological background also. The Pandavas of Mahabharata fame had established a temple for Panchalingas (five Sivalingas) at Balligave. From this it becomes clear that this place was a great Shaiva centre. Mythology also informs that it was the capital of the King Bali. This reminds us of the Deepavali festival and on one of these days people celebrate the worship of Balindra. Though he was a good King he had the vanity of being rich and hence Vishnu disguised in the form of a dwarf (vaman) pushed him to Patala (the lower world). Hence, it got the name Balipura.

Mythology further describes the glory of this place as evidenced by many inscriptions belonging to eleventh or twelfth centuries AD. It was the home of good people and was equal to Indra’s Amaravathi, full of prosperity and contentment. It was also like Alakapuri. The Kings who ruled in Balligave were great patrons of literature. It was also famous for Bouddha establishments such as stupas and viharas. Balligave was famous for Panchamathas where education of students was the main goal. These five mathas (mutts) had appointed good teachers well-versed in Vedas, Upanishads, Sankhya, Yoga etc. That is the reason why students thronged the portals of these five mathas for education.

The mathas provided hostel facilities where boarding and lodging was given free to all students. The rulers provided all these facilities to attract good students and teachers well-versed in various ancient subjects. This reminds us of the famous Universities such as Nalanda, Vikramashila and others. The ancient mathas consisted of Agraharas, Brahmapuris and Ghatikas (institutions of higher learning). All these were patronised by the rulers of Balligave.

Balligave had attained eminence from the time of the rule of the Chalukyas of Badami (6th to 8th Century AD). Actually their feudatories ruled over Balligave. During the rule of King Tailapa of the same dynasty who ruled in the eleventh century AD, Kudamarasa was ruling here at Balligave.

Later it was included in the kingdom of the King Vikramaditya. Kalachuri Bijjala had appointed competent feudatories to look after the Balligave region.

Later because of the conti-nuous wars between the Yadavas and the Hoysalas, the prominence of Balligave declined. It is said that Vishnuvardhana’s queen Shantaladevi was born out of the grace of God Dharmeshwara. The names of the sculptures who built many temples are known to us from the names carved on the bottom of many of the sculptures. Dasoja and Chavana and others are well-known sculptors of the Hoysala temples and sculptures. Dasoja and Chavana belonged to Balligave. One of the huge inscriptions at the Hoysalesvara temple mention his name also.

Due to neglect and without any patronage, the fame of Balligave declined. Now it has become an ordinary village and only vestiges of temples of Nandikeshwara, Kusumeshwara, Malleshwara, Trilokeshwara, Jogeshwara, Goppayya’s Basadi, Jayanti-prabha Bauddha Vihara are in a dilapidated condition and attracts no visitors.

Now many people have built their houses here and have used the pillars for building their house, after breaking them into their required sizes. Thus the glorious temples at Balligave have practically disappeared.

However, there is some solace for art-lovers. Tripurantaka temple built in 1070 AD is a beautiful temple which contains sculptures of great beauty. This temple has two sanctums (garbhagrihas). Unfortunately, the part of the temples have fallen down. There are fine and intricately carved sculptures on their walls which are still remaining in parts. Specially, noteworthy are the stories of Panchatantra. Among them the stories of tortoise and swan, fight  between ram and fox, crocodile and monkey are extremely fine.

There are many sculptures such as Lord Shiva dancing on elephant (Gajasuramardana), Kumara and Ganesha, the deities guarding the eight directions and others (Ashtadikpalakas). They are good examples for the Chalukya art.

The temple of Panchalinge-shwara is a huge one and stands on a high pedestal. Some of the sculptures of this temple have been brought to the Government Museum in Bengaluru. They can be seen there now. Among them attractive sculptures are Narasimha, Tara Bhagavathi, four-faced Brahma, many Jain saints. Another notable sculpture is Gandabherunda. Unfortunately, this sculpture is broken.

Fortunately, the Kedaresh-wara temple is intact. This was built in eleventh century AD and has three sanctums (trikutachala). It is built on a platform of about three feet in height. It has three towers.

Very close to the temple is located Kodiyamatha. It was the seat of Kalamukha saints and was very famous during the periods of 10th – 13th centuries AD. Many inscriptions describe the greatness of this matha. This matha is still popular and one of the saints is adept in pointing out the calamities that are likely to place.

Thus, though dilapidated and partially destroyed, Balligave has remained famous because of its holy temples and rich sculptures.