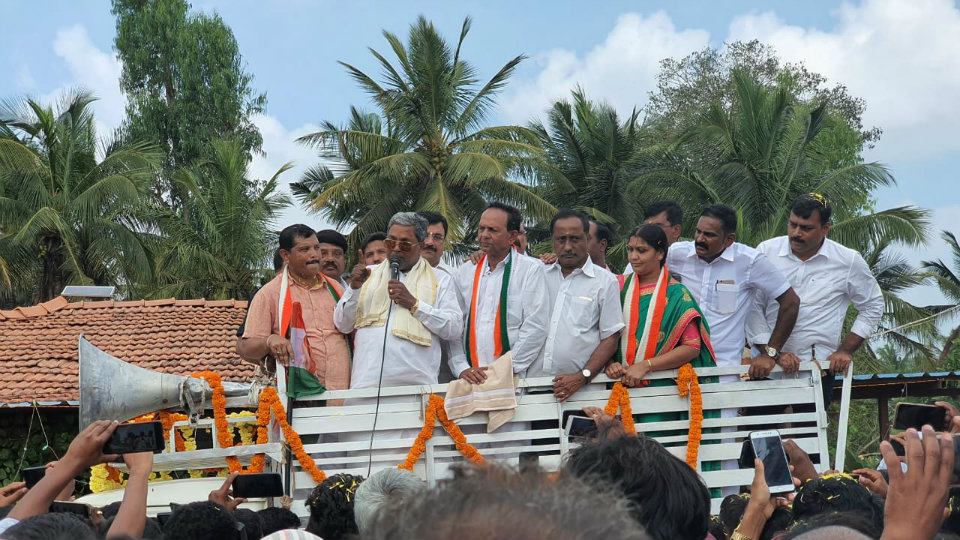 K.R. Pet: The BJP Government led by Chief Minister B.S. Yediyurappa (BSY) will fall after results of upcoming by-polls to 15 Assembly Constituencies are announced on Dec.9, said former Chief Minister Siddharamaiah, here on Thursday last. He also exuded confidence of donning the Chief Minister’s chair in the near future.

The former Chief Minister was on a campaign trail in an open vehicle in K.R. Pet Assembly Constituency to seek votes for Congress candidate K.B. Chandregowda.

Addressing the gathering, Siddharamaiah took a dig at the State Government stating that CM Yediyurappa, who could not handle the flood situation in North Karnataka, had promised to release crores of rupees of fund for Constituencies of all disqualified MLAs.

Calling upon voters not to support 15 disqualified MLAs including K.C. Narayanagowda, who had defied people’s verdict during 2018 Assembly polls, the former CM urged people to cast their votes for Congress candidate K.B. Chandregowda keeping in mind the earlier five-year stable Government given by the Congress party after a span of 40 years.