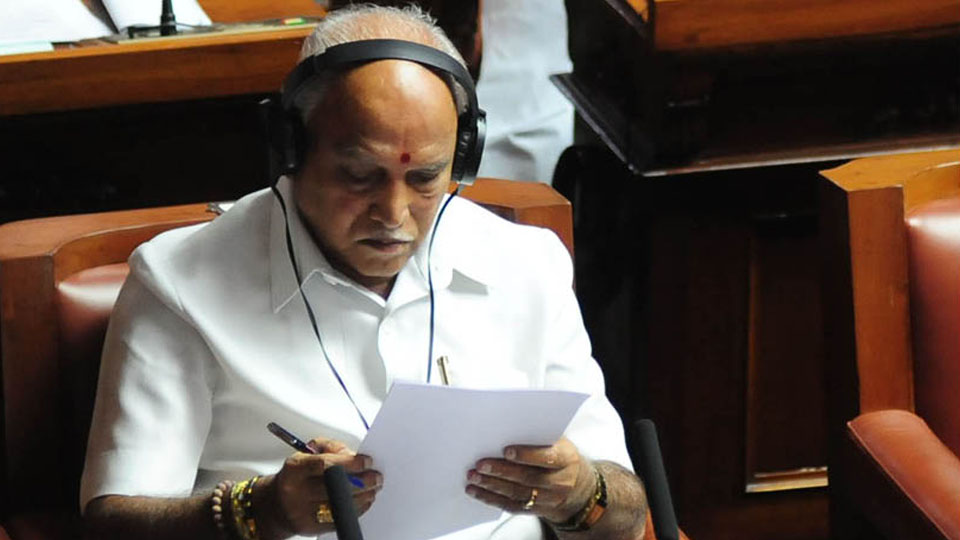 Bengaluru:  Chief Minister H.D. Kumaraswamy (HDK) sparred with Leader of Opposition and State BJP President B.S. Yeddyurappa (BSY) in the Assembly yesterday after the latter accused the CM of being inconsistent in his stand on farm loan waivers and the vows he made during the formation of the JD(S)-Congress coalition govt.

Speaking on the motion of thanks to the Governor’s address, BSY went hammer and tongs at HDK. “You are seen as the illegitimate child born out of an unholy alliance. Questions are already being asked on how long the ‘saandharbika shishu’ (circumstantial baby) will survive,” Yeddyurappa taunted HDK.

Quoting some of Kumaraswamy’s recent controversial statements where he called himself a “child of circumstance” and that he was not obligated to the people, but to the Congress party, Yeddyurappa said it is an “insult” to the people of the State.

Who is the real CM?

“Siddharamaiah says there’s no need for a new Budget. People are tired of this talk and they are cursing this Government.”  Yeddyurappa said the Governor’s address was “directionless and lacked vision.”

“If it wasn’t for the tall promises you made, the JD(S) would have got only 25 seats. Let me see how you waive farm loans worth Rs.53,000 crore, provide monthly pension of Rs.6,000 to senior citizens, give Rs.6,000 for six months to pregnant women among other initiatives.”

He also demanded that Kumaraswamy come out with a White Paper on the State’s finances before tabling the Budget.

READ ALSO  Let those who consume beef eat at home and die: Yeddyurappa

Heated exchanges broke out when Yeddyurappa claimed the CM had promised to waive private loans ahead of polls. Kumaraswamy rejected the charges and sought proof. It led to allegations and counter allegations on decisions made during the JD(S)- BJP coalition government which was in power in 2006.

Speaker K.R. Ramesh Kumar intervened and requested the two senior leaders to quit delving into the past. A thoroughly riled Kumaraswamy shot off a warning to Yeddyurappa: “You are testing my patience by making unnecessary remarks against me. You better mind your language.”

Several BJP Legislators raised the issue of sand mining after Yeddyurappa said the sand mafia was running riot in many parts of the State. “The government is also involved in this, with the Police taking bribes to allow sand mining,” Yeddyurappa said.

Multiplexes selling movie tickets at exorbitant rates, especially on weekends, was raised by BJP MLC Tara Anuradha. She demanded the State Government rein in multiplexes. “They (multiplexes) are charging Rs.1,000 to Rs.2,000 per ticket on weekends. The government should step in and fix one price for all days,” she said. She said governments in Tamil Nadu, Kerala and Maharashtra have done it. Highlighting issues concerning the Kannada film industry, Tara, an actor herself, urged the government to ensure that two screens in all multiplexes are reserved for Kannada movies. “No multiplex is ready to exhibit Kannada movies during prime time,”  she claimed.

Replying on behalf of Chief Minister H.D. Kumaraswamy, House Leader Jayamala Ramachandra, also a noted actor, said the previous Congress government had fixed weekday rates in multiplexes at Rs.200 per ticket, but it couldn’t be implemented as the owners had moved Court. “The government will convene a meeting of multiplex owners and address the issue,” she added.