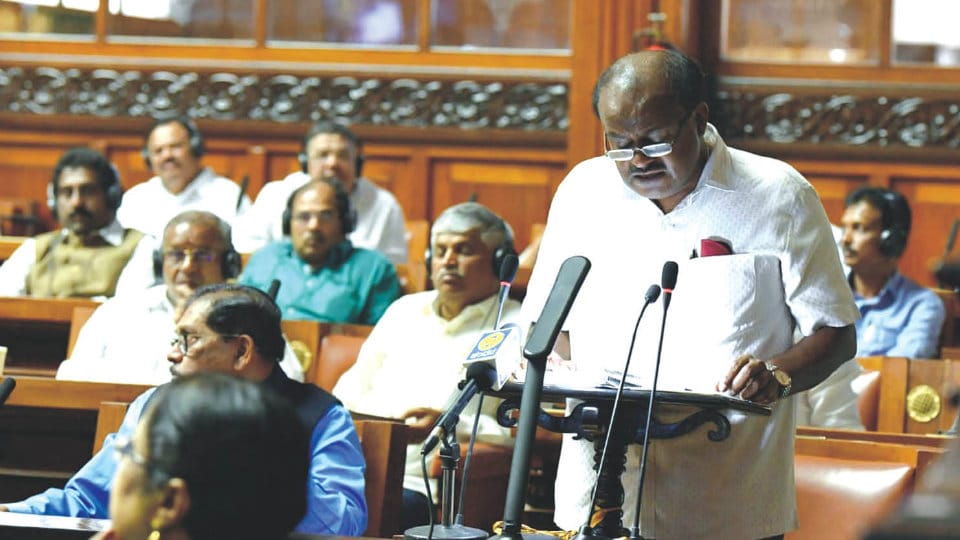 Bengaluru: Chief Minister H.D. Kumaraswamy, who holds the Finance Portfolio, presented the State Budget for 2019-2020 this morning in the Assembly. This is the second Budget of the coalition government he heads along with Congress. The timing he chose to present the Money Bill was 12.35 pm, after the Rahu Kala ended and the timings were suggested by CM’s brother and PWD Minister H.D. Revanna, sources said.

As soon as the CM began his speech, BJP MLAs, led by Opposition Leader B.S. Yeddyurappa, after shouting slogans from their seats, staged a walk out and dharna before Kengal Hanumanthaiah statue for not giving them the Budget copies before the CM delivered his Budget address. BJP members chanted “You are lying…” and “We want justice…” as the CM continued his speech.

The highlight of the budget is that the government has earmarked Rs. 1.5 lakh crore for Brand Bengaluru project. “It’s a challenge to provide infrastructure in Bengaluru. To improve Brand Bengaluru, several projects are being taken up, including peripheral ring road, Namma Metro Phase-2, suburban rail projects and so on,” said Kumaraswamy.

It was a day of hectic political activity in Bengaluru this morning, the Budget Day. Activities started at CM Kumaraswamy’s Home Office “Krishna” at 9 am where the CM released two audio clips and claimed that former Chief Minister and BJP leader B.S. Yeddyurappa is luring lawmakers to topple his government.

Later, the scene shifted to Vidhana Soudha where Yeddyurappa rubbished the audio clips as “fake” and “a concocted story”. Next was the Congress Legislature Party meeting where the party decided to seek the disqualification of four disgruntled legislators — Ramesh Jarkiholi (Gokak), Mahesh Kumthalli (Athani), Umesh Jadhav (Chincholi) and B. Nagendra (Bellary).

By the time the above developments played before the State electorate, it was 12.30 pm and it was the “right” time for CM Kumaraswamy to present the Budget.

As soon as the CM began his speech, BJP MLAs after shouting slogans from their seats, staged a walk out for not giving them Budget copies and the government cited a ‘new’ rule to justify the same.

Sources said that the main reason for the ‘new’ rule is that the Kumaraswamy government and the Chair did not want to face the embarrassment of chaos in the House, with Budget copies being torn apart and used as paper missiles by the Opposition BJP to vent their anger against the ruling coalition.

While the official stand of the Speaker is a marked departure from convention — copies were always distributed as soon as the CM begins his speech — the ‘new’ rule is practised in Parliament with the Union Budget. Copies are distributed only after the Finance Minister delivers his address.

Speaker K.R. Ramesh Kumar and the government have decided not to distribute copies of the Budget in the House when Kumaraswamy is reading his speech.