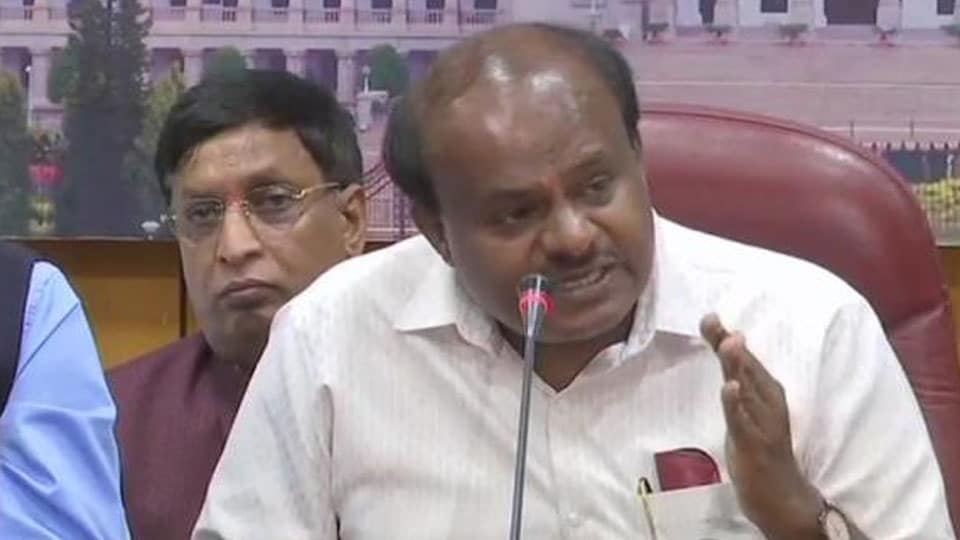 Bengaluru: Chief Minister H.D. Kumaraswamy (HDK) this morning released two audio clips at his Home Office “Krishna” in Bengaluru and claimed that former Chief Minister and BJP leader B.S. Yeddyurappa is luring law-makers to topple his government. Later, the CM complained to Assembly Speaker Ramesh Kumar about the MLAs being lured allegedly by the BJP.

“On one side Narendra Modi is preaching to the country and politicians, on the other side, he is encouraging his friends to demolish democracy through black money. I will expose this now, I have the proof to back my charge,” he said.

“I got a call at around 11.30 pm yesterday saying that Yeddyurappa wants to speak to me. As I didn’t receive the call, I got a call for the third time from a different number. I was asked to travel from Yadgir to Devadurga to meet Yeddyurappa. I immediately called ‘Anna’ (Kumaraswamy),” he said.

“I reached Devadurga Circuit House late in the night. Hassan MLA Preetham Gowda and Devadurga MLA Shivanagowda Naik were there. I was asked to leave for Mumbai immediately, where B.Y. Vijayendra (Yeddyurappa’s son) is there. I was told that the payment will be made there. I said that I will consult with my father and get back to him.”

“Yeddyurappa told me that he had booked the Legislative Assembly Speaker himself by paying him Rs. 50 crore. Sharanagouda says he was offered by Yeddyurappa a plum Ministerial portfolio if he convinces   his father to jump ship to BJP,” he added.

“We have even booked Speaker by paying him Rs. 50 crore. Do not worry. BJP National President Amit Shah has even booked Supreme Court Judges,” Yeddyurappa is said to have stated.

Yesterday, Kumaraswamy gave away prime positions in the government to potential rebels in an effort to pacify them before the Budget. Among the beneficiaries of this move are law-makers Pratap Gowda Patil, Basanagouda Daddal and M.A. Gopalaswamy. While Daddal has been appointed as Chairman of the Maharshi Valmiki Scheduled Tribes Development Corporation, Gopalaswamy is the new Parliamentary Secretary to Water Resources Minister D.K. Shivakumar.

Disgruntled MLA Umesh Jadhav — found to be absenting himself from Congress Legislative Party meetings despite repeated warnings — has been replaced by Pratap Gowda Patil as the Chairman of the Warehouse Corporation.

BSY hits back at HDK

Yeddyurappa hit back at Chief Minister Kumaraswamy and said that the CM was hiding his failures. He rubbished the audio clips as “fake” and “a concocted story”. Shortly after Kumaraswamy released the clips, Yeddyurappa said he had not met anyone to woo JD(S) law-maker Naganagouda Kandakur as alleged and that the charge against him was “far from the truth.”

Yeddyurappa said he went to Devadurga, where the lawmaker’s son Sharanagouda claimed to have met him and recorded the conversation, to visit a temple and flew back to Bengaluru. Kumaraswamy had “concocted” the story to hide his failures and inability to keep the JD(S) and Congress flock together, Yeddyurappa told reporters.