Sale on wheels or car boot sale is something that we all have seen around us. But little do we know about the struggle and hardships these sellers face while running their business. This journey, though on wheels, is directionless and has an uncertain destination. Unpredictability of their business has evolved into a monotonous affair, an affair that needs ears to hear. This Weekend Star Supplement throws light on the lives of a few car boot sellers who desperately try to make ends meet.

The Royal Mysuru City is a cultural hub known for its rich depiction of heritage and tradition. One such tradition – ‘Car Boot Sale’ which is very popular in England, can be seen on the streets of Mysuru too. However, many are not aware of this foreign tradition followed at their own backyard.

‘Car Boot Sale’ is quite popular in Mysuru. The sale would not amuse a common man as he would presume it to be a fashionable way of making business. He probably would not have given a thought about the things that go behind it. However, in reality, it has an altogether a different story – a story of hardships, reality and ignorance. In short, it is a story of survival.

It is a kind of a market or a commercial stall where private individuals sell goods and food in the trunk of their cars.  It is a kind of business-on-wheels where they set up their stalls at prominent places and junctions.

Food products, clothes, plastic items are common things that are sold this way. Cars are customised, sometimes painted in bright colours, and chosen based on the type of business. While some prefer Omni for its spaciousness, others have a customised mini kitchen.

Customised cars have been a common sight in Mysuru. Customisation has made lives of these sellers convenient. Mysuru, known for food lovers, is full of Pani Puri and chats stalls, gobi manchurian stalls and fast food drives, providing a potential market for car boot sellers to serve food-on-the-go or perhaps, business-on-the-move.

Here we throw some light on a few car boot sellers in Mysuru and understand life from their perspective.

On a busy Agrahara Street, a middle-aged man tries to make a living with the help of a stall which he has setup in the trunk of his Maruti 800. It is a dark-green car and he sells mosquito bats, bulbs, torches, emergency lights and plastic items. He has illuminated his car with LED lights and hopes that would give him the extra edge as people will see his well-lit shop as they pass by. 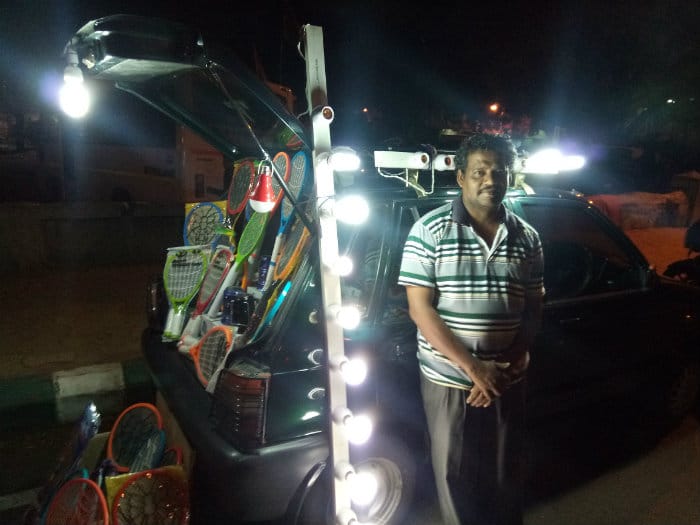 With a monthly profit margin between Rs. 5,000-10,000, Govindaraju struggles to make ends meet. The products he sells are seasonal. During summer, it is summer clothes such as T-shirts, shorts, track pants and undergarments. His targets are from lower middle class families.

He says, “People know that my products lack quality, but I sell products at a price that seem reasonable which has a shelf-life of about 6-8 months. So the concept is clear: Customers buy my products keeping in mind about its short-term durability and thus they cost less. It’s a win-win situation for both of us.”

Govindaraju is been into this sale since the past 6 years. He either sets up his car in Agrahara or on H.D. Kote Road. After standing for about 8 hours per day, Govindaraju leaves it on his destiny and fortunes for the kind of business he makes. He also adds that the emergence of e-markets and malls has made life miserable for his family.

Anand has setup his business of sunglasses on his Fiat Palio car. He positions his car near the railway track, next to the Kukkarahalli Lake. Making a profit of about Rs.10,000 per month , he is able to manage his livelihood. He targets students and officers. 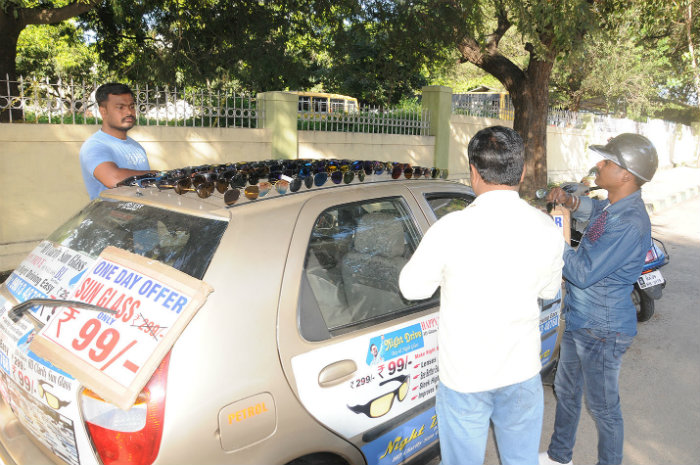 He provides discounts on glasses to ward off competition. He says, “I don’t fear online market as my customers tend to buy glasses after clear examination and trial, which is not possible on online platforms.”

Anand is into this business since one-and-a-half years and hopes to continue doing it. He feels using a car as a stage to display his glasses is something unique and people out in the sun and on-the-go, tend to stop by and purchase them.

Pani Puri, Bhel Puri and Chats never fail to gain attention of foodies. Girish is one such seller who has set up a chat stall on his Blue Omni.  Operating from North Eastern part of N.R. Mohalla, Girish sells mouth-watering chats. 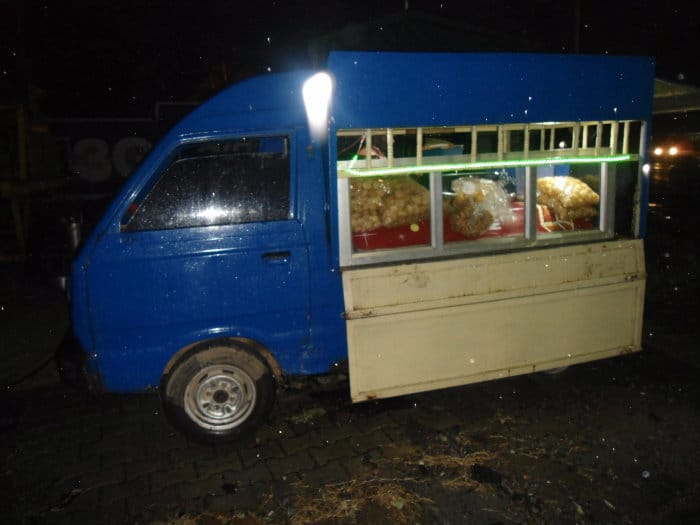 He said, “I have pretty good business on regular days but it’s hard to find customers on rainy days.” Regular customers from that region frequent his car-stall. He feels lucky to own a car as other sellers who have carts have a tough time to push it around and vacate during rains.

With his fast food car situated near DC office and Maharaja’s College, H.M. Premesh Kumar wants to rope in daily workers, officers and students as his potential customers.  He uses a White Fiat car on which he cooks and sells food items. 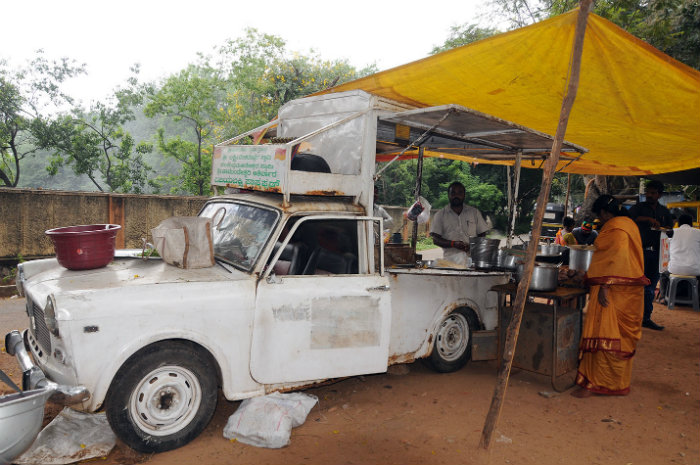 His car featuring a big name plate reading ‘Vijayalakshmi Fast food’ serves idli, baath, parota and poori for breakfast and sambar rice, ragi mudde, chicken curry, and omelettes for lunch. With huge inflow of customers, Premesh gains a monetary benefit of about Rs.1,500 per day. He says, “Business is going good these days but it hurts during government holidays and weekends.”

Premesh has had the experience of being a professional cook.  He says his fiat helps him a lot. Powered by gas, he saves fuel expenses and transporting has been convenient. He reveals that this is his fourth year in this business and he had a tough time for the first three years but has been able to make profits since a year.

Triveni Circle in Kalyanagiri Nagar has several eating outlets setup on wheels. One such fancied four-wheel eatery is owned by Imtiaz Pasha.

Imtiaz Pasha has set up his ‘HKGN Gobi Centre’ on his modified White Fiat Pal Padmini car. His car has a large stove to accommodate a huge frying pan on it. He prepares dishes like carrot chilly, potato chilly, baby-corn chilly, cabbage manchurian, capsicum manchurian, samosas along with fried rice and noodles. 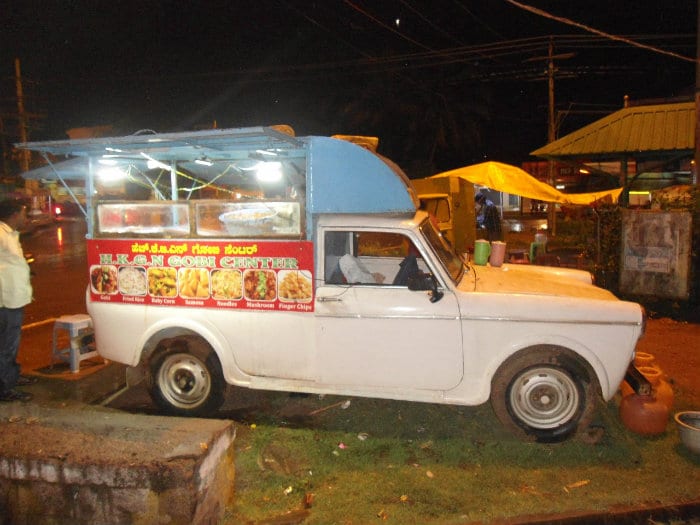 Talking about his customer flow, he says, “That is very unpredictable. Some like the taste so they are loyal to my shop and some don’t and they go to my competitors who have set up similar shops next to me.”

Being a cook himself, Imtiaz always wanted to set up such a stall.  Since the past six years, he has been able to manage his life with a monthly gain of about Rs. 15,000. People swell and surround his Fiat car as he sets shop from 4 pm to 10 pm.

While his entire family and ancestors are into making bamboo baskets, P. Krishna has set up his own car boot sale for his livelihood.  With a Grey Omni near the fire station (near the under bridge), Saraswathipuram, Krishna attracts daily walkers and pedestrians. His sales include mosquito bats, pumps for water cans, car service pipes, writing tables for children, small toy scooter for kids, swings, yoga mats etc. He gets all his products from a wholesale shop in Bengaluru.  Owning an Omni gives him sufficient room to carry his products and protect it from rain.

With a mere profit of Rs.10,000 per month, he finds it hard to run his family. He says, “Life is difficult for us as there is no guarantee that there will be business on all the days. We do not own a house and paying rent is very difficult.”

He was dejected as banks and financial institutions did not offer him loans nor did he get any Government support. He said, “I went to the bank for loans and they ignored me”. He adds that business through a car boot was moderate a few years ago until the emergence of online shopping which has caused a steep decline in their earnings.

Two brothers decided to venture into different paths and moved away from their traditional occupation of farming. They have set up a fast food on wheels.

Soundarya (elder brother) and Sunil have set up a mini kitchen on their customised white Fiat Palio at Chamundipuram (near St. Mary’s School). Their aim is to satisfy the hunger of their customers by providing nutritious and healthy food, without compromising on taste. 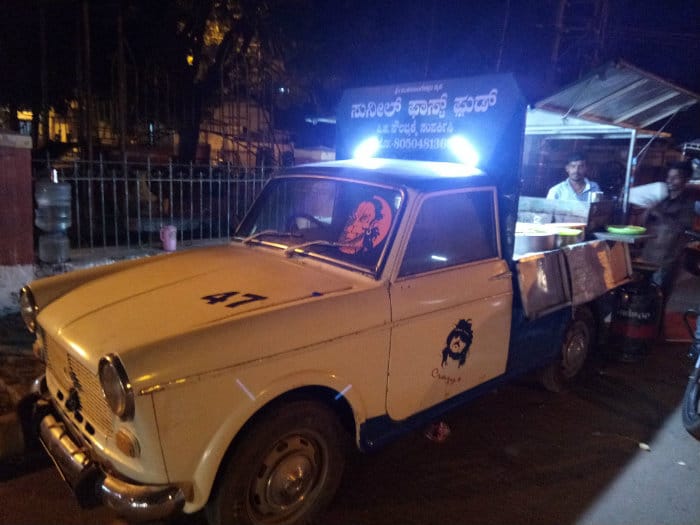 Soundarya says, “No matter how much customers we gain, more than often we run into losses due to high prices and we are unable to meet ends. We mark our identity by the spot or the location where we setup our car. Regular customers, once accustomed to our quality and taste, keep frequenting. But lately, repairing works on road has forced us to evacuate and move to unfamiliar boundaries and we end up losing regular customers. Their stoves are set on fire at 5.30 pm and they ferry their Fiat back to their home only after 11 pm.

Suresh owns a Gobi Center which he has set up on his vintage Fiat Pal Padmini car at Kalyanagiri Nagar (near RTO). The blue customised fiat car has a mini kitchen and he specialises in cooking Chinese items. Suresh prepares gobi manchurian, baby-corn manchurian, mushroom manchurian, fried rice and noodles. 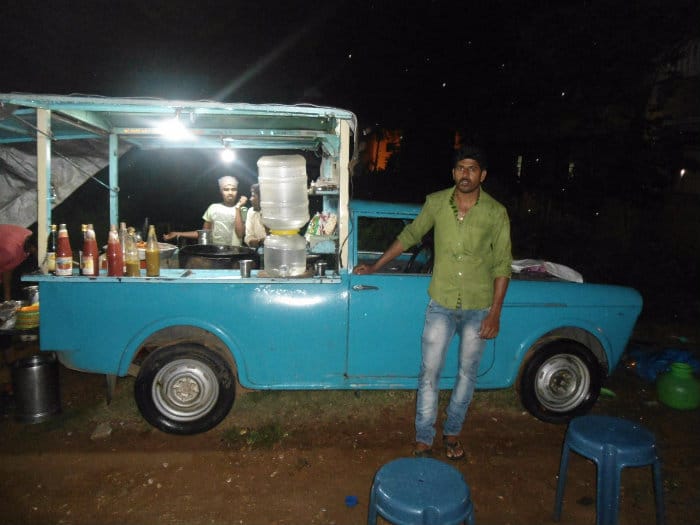 Suresh’s targets are schoolchildren and teenagers. With a profit of about Rs. 15,000 per month, Suresh is able to manage his family. He says, “I love this concept of selling or cooking in such customised cars as it is convenient for us to prepare everything within the available space and transportation of plates, utensils, water cans etc., is very simple”.

He, along with two helpers, sets up this car from 4 pm to 11 pm. “I enjoy my business, but it’s difficult to deal with drunkards who frequent during late nights,” he says.

Dhanu Madaiah has setup a fast food on his vintage Fiat car, which has been given a thick coating of yellow paint to grab attention.  He serves a variety of vegetarian and non-veg dishes. His work begins at 7 am as he sells idli, dosa, chapathi, poori for breakfast. For lunch, one can get to eat dishes such as ghee rice, ragi mudde, parota, chicken and mutton curry, fish fry and kheema. 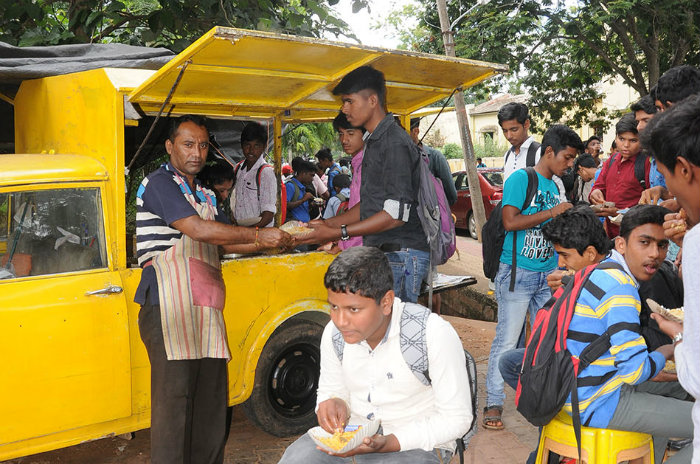 Operating from near Maharaja’s and Maharani’s College, he attracts a lot of students. Madaiah makes a profit of about Rs. 600 per day.  He is into this business since twenty years. Unlike others, his car doesn’t have a kitchen. Instead, he prepares food and then gets them to his place.

“Mornings, people heading for work and colleges have limited time so they prefer fast food, instead of hotels,” he says.

Of late, there has been a ‘BBQ Bike’ chain that is growing in India, which has started in Hyderabad, Bengaluru, Chennai and Delhi. Here, bikers serve barbequed meat on their Royal Enfields. The custom-made bike has everything one needs to cook and serve – coal grills, storage units, a barbecue pit and foldable tables. No wonder it is an innovative marketing strategy – a shredded vehicle to serve shredded lumps of barbecued meat! 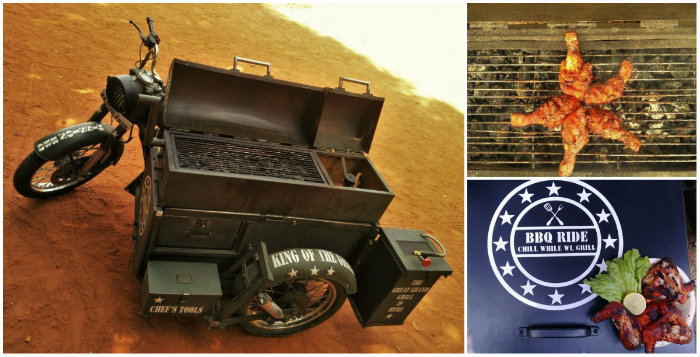