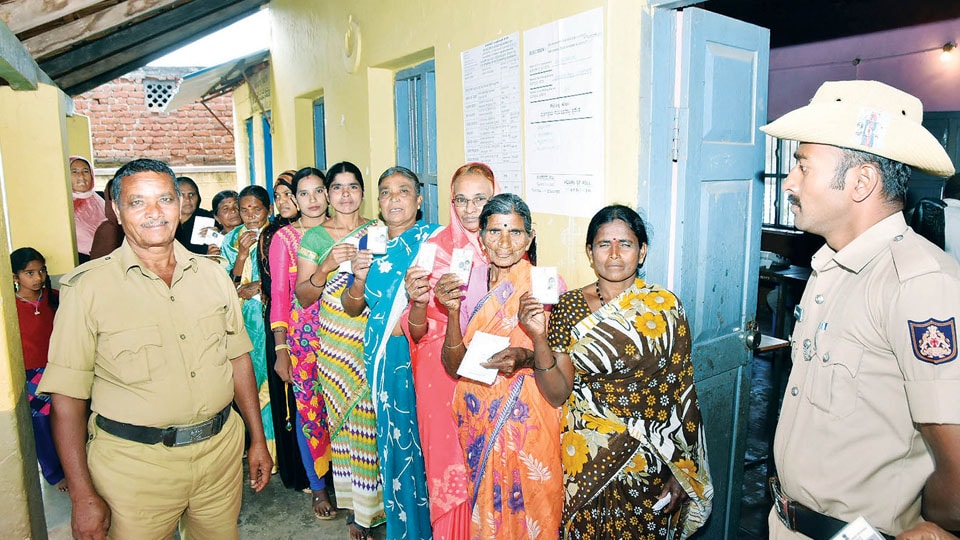 Mysuru: The crucial by-elections to 15 Assembly constituencies in Karnataka that will determine the fate of Chief Minister B.S. Yediyurappa-led BJP Government began this morning amid concerns of political parties of a possible low voter turn-out.

The seats fell vacant after 17 Congress and JD(S) MLAs defected and were disqualified.

The dates for Maski and R.R. Nagar have not yet been announced due to pending cases in the Karnataka High Court.

The BJP, that has 106 members, needs to win at least six of the 15 seats to remain in majority in the 224-member Assembly (including the Speaker, who has a casting vote), which would still have two vacant seats — Maski and R.R. Nagar. The current strength of the Assembly is 222. Out of 15 constituencies going to the by-polls, 12 were held by the Congress and three by the JD(S).

The BJP has fielded 13 of the 16 disqualified Legislators who had joined the party as its candidates from their respective constituencies from where they had won in the 2018 Assembly elections on Congress and JD(S) tickets.

As the polling began at 7 am, people were seen standing in queues to cast their votes at various Polling Booths in different parts of the State. Voting will end at 6 pm and results will be declared on Dec.9.

An estimated 6.06 percent of voting took place during the first two hours and according to voter turnout figures available till 9.30 am, the highest turnout of 9.01% was recorded in Hoskote, while the lowest was in Shivajinagar with 3.04%. At 11 am, a total voting percentage in all the 15 constituencies was recorded at 17.6%.

Hunsur recorded 19.12 percent votes until 11 am with 24,770 male voters, 18,814 female voters and 1 other. 20 percent polling was recorded in K.R. Pet constituency till 11 am. Following technical glitches, an EVM was replaced at Polling Station 136 at Hunsur town.

The State Government has declared a holiday to all Government offices, schools and colleges today in view of the by-polls.

The holiday was applicable only in the constituencies going for by-polls. However, Vidhana Soudha, Vikas Soudha and offices in M.S. Building functioned as usual. Employees who are registered as voters in any of the poll-bound constituencies can avail of paid leave today.