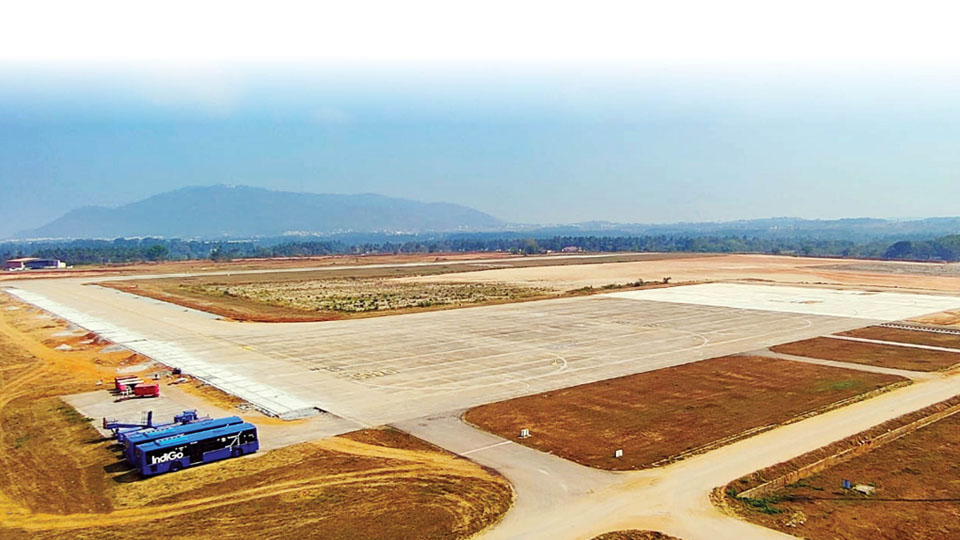 Mysore/Mysuru: At present, the Mysore Airport has a single runway of 1,740 metres in length which is only suitable for ATR planes providing short-haul flight operations. The existing Airport is spread over 507 acres and under the expansion project, the length of the runway will be increased to 2,750 metres and 45 metres width that allows jet aircraft such as Boeing 737 and Airbus A320 to land.

For the runway expansion, 240 acres of land is required and the Karnataka Industrial Area Development Board (KIADB) has given final notification for acquisition of 160 acres. The process has been stuck as the State Government is yet to release funds for land acquisition.

Speaking to Star of Mysore from New Delhi this morning, Mysuru-Kodagu MP Pratap Simha said that the capacity of the Airport in terms of passenger terminal and goods terminal is being increased and the land surrounding the existing runway is being levelled off as per guidelines.

“Over Rs. 400 crore is needed to pay compensation to land owners who will lose land for the project and Rs. 1.5 crore will be paid per acre through KIADB. I met Chief Minister Basavaraj Bommai in Delhi yesterday and sought budgetary allocation. The CM has assured me that the issue of Rs. 400 crore will come up in the Cabinet and a note is being prepared to be tabled before the next Cabinet for approval. The CM sounded positive and I am hopeful of Budget allocation and also Cabinet approval,” he said.

Once the land is acquired, the KIADB will hand over the same to the Airports Authority of India  and Rs. 700 crore already ready with the Centre will be used to expand the runway. “Accordingly, the facilities at Air Traffic Control will be augmented to handle bigger flights and also to handle frequent arrivals and departures,”  he added.

3 COMMENTS ON THIS POST To “Cabinet to clear Rs. 400 crore for runway expansion: MP”