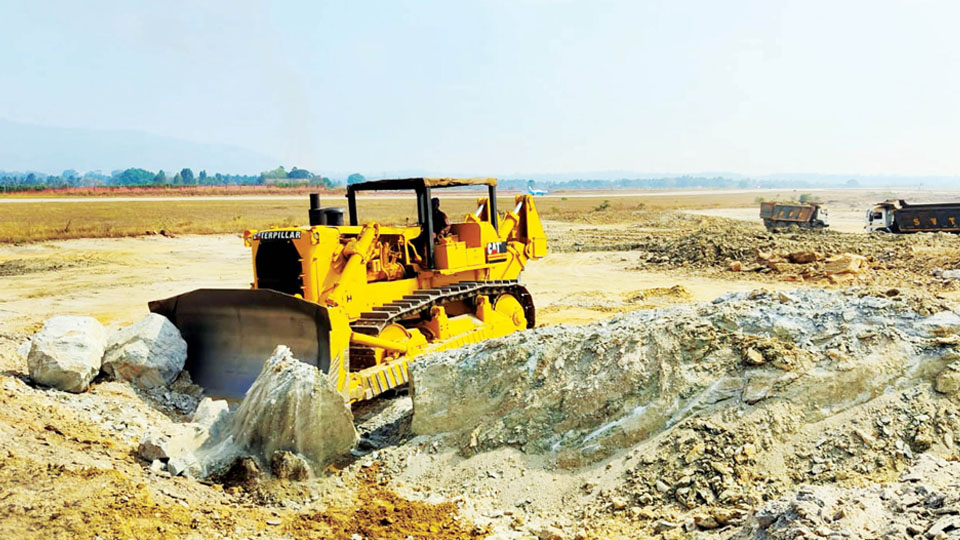 Mysore/Mysuru: Works are going on in full swing to level the areas around the existing runway of the Mysore Airport at Mandakalli and these capacity increasing works will facilitate the proposed runway expansion for bigger flights to land. The existing three parking bases have been increased to five and the runway safety area has been widened.

According to the nature of works as specified by the Airports Authority of India (AAI), up to 140 metres of both sides of the runway should be level and must not have land gradients. Plus, water should not stagnate. The levelling works are being done following AAI guidelines.

The AAI guidelines come after several incidents that have been reported in the recent past where planes while landing have veered off the runway scaring passengers and also leading to accidents. Both sides of the runway are levelled off so that even if the plane veers off during landing or take-off, it will be safe, says the guidelines.

Mysore Airport Director R. Manjunath told Star of Mysore this morning that earth movers are being used to level 140 metres on both sides of the runway. “We decided to take up the work with two intentions. One, to follow the AAI guidelines and second, we thought as the talks about expansion are gathering wings, instead of doing the levelling works only after the runway expansion is cleared, we decided to use the spare time now to do the same. The works undertaken now will facilitate speedy expansion,” he explained.

More green space:  The entire surroundings of the runway is being levelled, especially the part near the Mysuru-Nanjangud Highway that had a steep gradient. Even this area has been levelled off after clearing wild growth. Systematic landscaping of gardens will be the next scope of work and greenery will be increased for more visual appeal, Manjunath added.  There was an old building that was operational years ago before the new building and the Air Traffic Control systems were established. This building has been demolished and the area has been levelled off, Manjunath said. Other works include wall-to-wall grading, increasing the terminal seating capacity and augmenting infrastructure at goods terminal, he said.