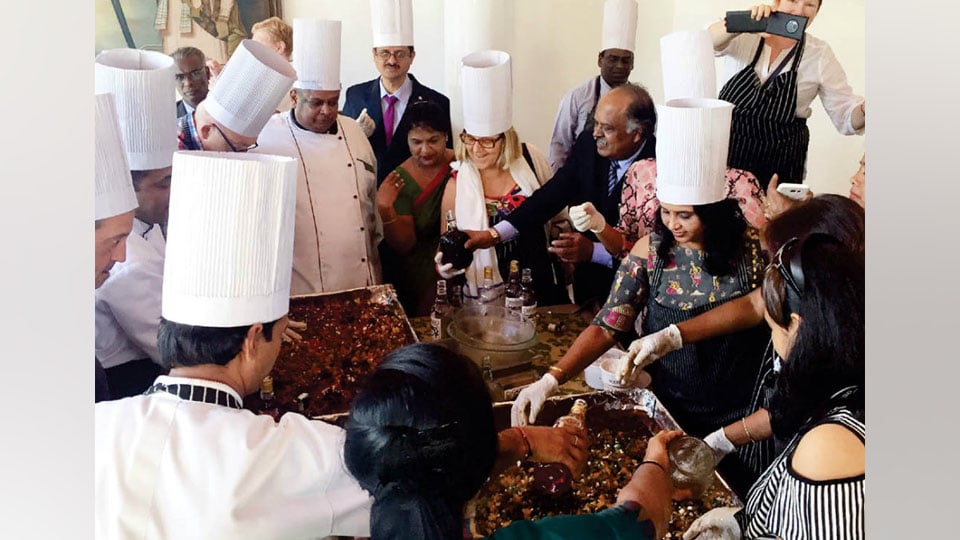 Mysuru: As the month of December gets underway, the Southern Star Team gets ready for Christmas celebrations. In order to make the preparations come alive, the Hotel had recently invited its in-house guests to join in the fun and exciting annual fruit-mixing ceremony!

The guests, donning chef caps, aprons and gloves, enjoyed the colourful ritual of mixing dry fruits such as apricots, figs, cashew nuts, raisins and black currants with wine, rum, brandy and whisky. Once all the fruits were laid out, the spices such as cinnamon and nutmeg were sprinkled into the mix. The Hotel’s Management team and Staff too joined the guests.

The history of cake-mixing ceremony dates back to 17th century AD when it marked the arrival of harvest season. During this time, a wide variety of fruits and nuts were harvested and were prepared to be a part of the traditional Plum Cake.

Speaking on the occasion, Southern Star General Manager Ratan said, “though the history talks about it as a harvest ceremony, today  it is celebrated as a social gathering.” At The Quorum: The traditional cake-mixing ceremony was also held at The Quorum Hotel in city recently. Bishop-Emeritus Dr. Thomas Anthony Vazhapilly and Rev. Fr. Ananthraj   were joined by St. Philomena’s boarding kids, Nuns and Team Quorum. “This ceremony has now become  an important event for families to come together with friends,” said Hotel’s MD Rohan Gopinath and added “Christmas is a never-ending fascination with its glittering stars, cribs and decorated Christmas trees to bring in the festive mood.”

At Fortune JP palace: The traditional cake-mixing ceremony was held at Fortune JP Palace on Nov. 25.  Manoj Kumar Singh, Director of Mysore Airport, was the chief  guest. General Manager of the Hotel Dhiren Johar and other delegates took part in the ceremony held as part of Christmas to spread camaraderie and goodwill.