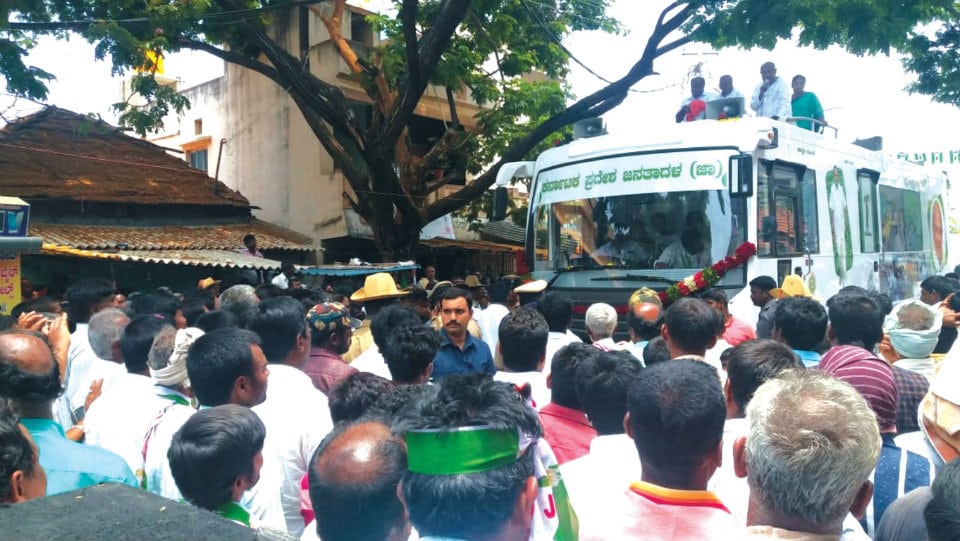 Mandya has garnered the attention of the national media due to the contest of multilingual film actor Sumalatha Ambarish and Nikhil Kumaraswamy, son of Chief Minister H.D. Kumaraswamy.

Nikhil Kumaraswamy, who is said to have injured his hand and who had taken a day’s break from canvassing yesterday, resumed his campaign from Nagamangala this morning.

He conducted the campaign accompanied by MLA Suresh Gowda and MLC Appaji Gowda along with supporters on an open jeep.

Sources told Star of Mysore that Nikhil sustained injuries to his right hand while campaigning at Maddur taluk on Thursday night.  He took some rest in Bengaluru after getting treated.

Nikhil had canvassed for the whole day on Thursday. He was constantly waving his hands with the supporters and suffered an injury. However, he continued his campaign, covering the hand with a plaster. As the pain increased, he took a break.

Speaking to reporters, Kumaraswamy said that he never insulted the Armed Forces and has not given any statements insulting the Army. The CM’s reply comes in the wake of his reported statement on Indian Army drawing criticism even from Prime Minister Narendra Modi.

He asked the PM not to play with the lives of poor children who join Indian Army in large numbers.

The CM also promised to keep his words to complete the Rs. 8,500 crore projects which would be implemented in Mandya within six months including the construction of new sugar  factory. He said that he could not release sugarcane dues due to the enforcement of model code of conduct.

On the life threat to Independent candidate Sumalatha Ambarish, the CM said that he is ready to recommend Z+ security to her if there is a threat to her life. He also ridiculed that Sumalatha could seek security from US President Donald Trump prevailing upon PM Modi.

Independent candidate Sumalatha Ambarish continued her campaign in more than 39 villages in Malavalli segment including Channapille Koppalu, Kannahalli and other villages.

After a short break, Sandalwood actor Yash resumed his road shows from Koppa hobli in Nagamangala segment along with his supporters. Another actor Darshan too continued his campaign from Ragimuddanahalli in Srirangapatna taluk.

They appealed voters to exercise their franchise to Sumalatha’s symbol ‘farmer blowing a trumpet’ with serial number 20 in Electronic Voting Machine to uphold the dignity and self respect of the people of Mandya.  The actors received rousing welcome by their fans in various villages.