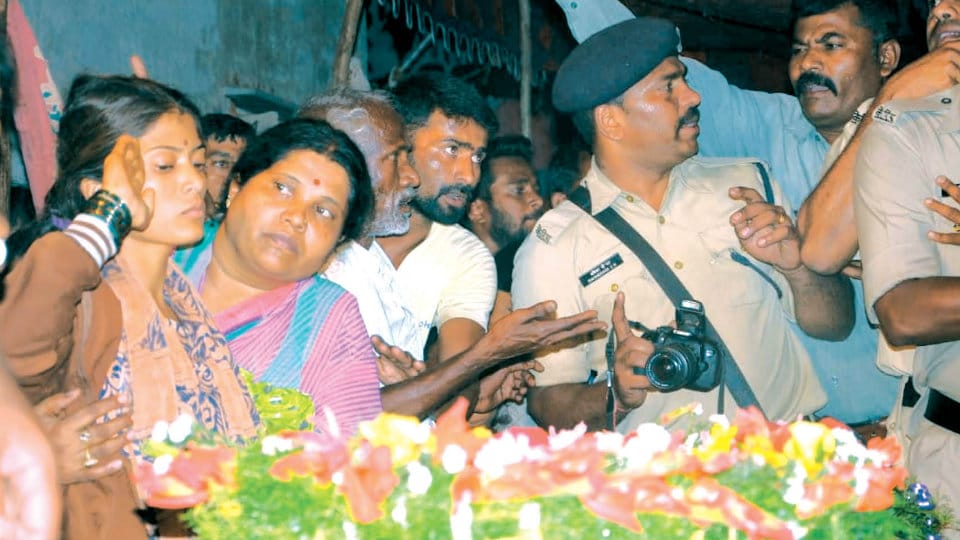 Mandya:  The mortal remains of CRPF jawan H. Guru who was killed in suicide bomber attack at Pulwama in Jammu & Kashmir on Thursday was consigned to flames with full State honours at his native place Gudigere Colony at Maddur, near here at 8.45 pm yesterday.

Earlier, the District Administration had made arrangements for the public to pay their last respects to the departed soul. The body which, arrived at HAL Airport in Bengaluru earlier in the day was received by Chief Minister H.D. Kumaraswamy and Union Minister D.V. Sadananda Gowda.

Later, the body was taken to his native place by road and thousands of people paid their last respects by throwing flowers and garlands on the body en-route.

Soldier Guru had plans of taking voluntary retirement from service and settling down at his native village. Eldest son of Honnaiah and Chikkolamma couple, who run a laundry shop, Guru joined CRPF in 2011. He had married Kalavathi just 10 months ago.

Chanting patriotic slogans, people from all walks of life waited along the road to pay their tributes. As the Army vehicle carrying the mortal remains of the martyr passed through the Bengaluru roads with hundreds of youths accompanying the vehicle on two-wheelers.

In Mandya, tens of hundreds of people from across the district thronged Gudigere to pay their last respects. The vehicle carrying Guru’s mortal remains was delayed by over two hours as people were lined up all through the way.

The cries of family members, relatives, neighbours and friends filled the air as the body arrived. People lined up on the Bengaluru-Mysuru Highway to pay last respects, as the body reached Nidaghatta, on the Maddur-Channapattana border.

Guru’s mortal remains were consigned to flames amid chants of ‘Guru Amar Rahe’.

His wife Kalavathi, inconsolable since Thursday, gave him a final salute before collapsing. Later, after the State honours, the Tricolour wrapped around Guru was handed over to a sobbing Kalavathi by a tearful CM who assured her all help.

He also handed over a cheque for Rs. 25 lakh to her and assured family members of jobs.

As government land was not available in his village Gudigere for the last rites, the Mandya district administration following a request by Guru’s family zeroed in on Mellahalli, 1.5km from his hometown.

The last rites were held as per Madivala customs and traditions. Guru’s younger brothers Anand and Madhu lit the pyre. CRPF personnel and KSRP personnel fired three rounds in the air as a mark of respect.

Guru’s father-in-law Shivanna and mother-in-law Jayamma, who fell ill after the final rites, are undergoing treatment at a hospital.

Actor Sumalatha, wife of former Minister M.H. Ambarish, said she will donate half an acre of land to Guru’s family. The family can use the land at Doddarasinakere either to build a memorial in honour of the martyred soldier or for agriculture purpose, she said.

Sumalatha said that she will visit the family as soon as she comes back to India from Malaysia where shooting of her son Abhishek’s movie is going on.

A holiday was declared for all schools and colleges in KM Doddi and surrounding villages in the wake of the final rites of the martyred soldier.

A bandh was observed in KM Doddi and other villages. All the business establishments were shut down. In Maddur and Mandya also, several shops remained closed.

The LIC authorities transferred the death benefits to the nominee of Guru without the family producing any documents.

The LIC authorities handed over a cheque of Rs. 3 lakh to the family.