Home » News » Campaign ‘War against cancer’ to be launched on Dec.25 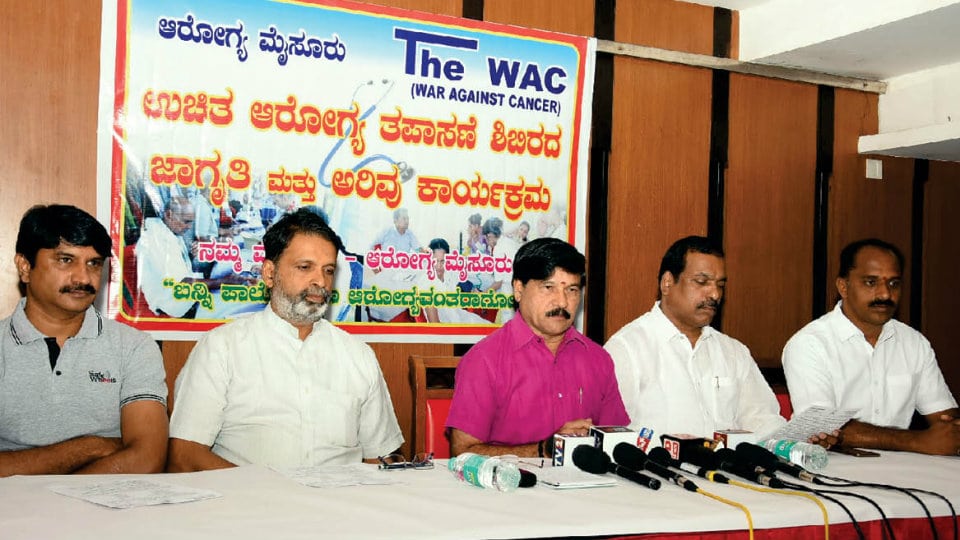 Campaign ‘War against cancer’ to be launched on Dec.25

Mysuru: Asare Foundation, in association with GSS Foundation, DRM Hospital and others, is launching a campaign titled ‘War against cancer’ in city. Disclosing this at a press meet at a private hotel in city, MLA S.A. Ramdas said that the campaign would be formally launched on Dec.25 at 7.30 am at Basavaiah Community Hall near ISKCON Temple in Jayanagar here. The programme will be inaugurated by retired High Court Judge N. Kumar. He added that Sri Ganapathy Sachchidananda Swamiji and Dr. Shantaveera Swamiji would grace the occasion.

Ramdas further said that the campaign to go on for the next five years, would feature a free health check-up camp to screen for cancer, respiratory and heart ailments in every Ward once a week to be assisted by doctors of leading hospitals. He further said that ‘Swarna Prashana’ would be administered to 1,000 children in the age group of 1 to 10 years on Dec.25 at 7.30 am at Jayanagar Government Hospital. He pointed out that the resistance power of children had gone down which would be attended on top priority with good immunisation schemes.Going further, Ramdas said that every family in city would be screened for health problems and a Health Card would be issued to them. The theme of the campaign would be to create an awareness among people on cancer and other ailments.