Home » Columns » Abracadabra By K. B. Ganapathy » Cardiologist Dr. C.N. Manjunath: A visionary and a role-model of an Indian — 2 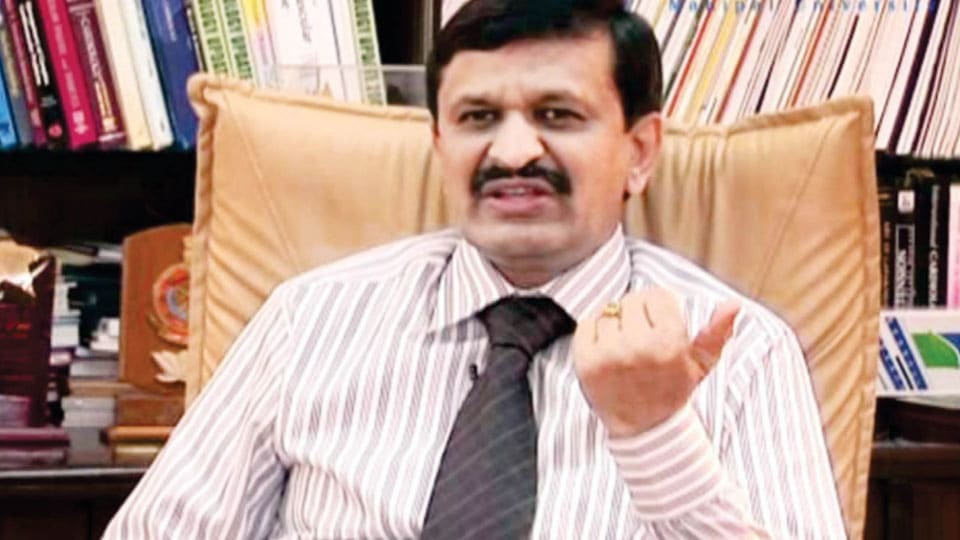 Cardiologist Dr. C.N. Manjunath: A visionary and a role-model of an Indian — 2

There is a difference between sight and vision. Sight is just the capacity to see the world around us. But vision is looking beyond  the immediate. Be a visionary so that we can serve the society or our future generation.

British have ruled our country for over 150 years and have now left us, but some of us are still thinking and working like British. They would raise objection to everything. What we can accomplish in one day is taking one year because of such people. So, if there are some legal constraints which are causing inconvenience to people, we should bring amendments to the law and correct such legal constraints.

One immediate example for the validity of Dr. C. N. Manjunath’s sagely advice is here in our city itself. That is the blanket decision taken by the then DC of Mysuru in the year 2010-11 when the BJP was in power declaring about 2,000 acres of land claimed to be of the Royal family as ‘B-Kharab’ land, meaning Government land.

The learned DC, an IAS Officer of British orientation, as Dr. Manjunath had rightly remarked in his speech, did not exempt the Housing Layouts formed, some 45 years ago and some about 20 years ago, by a quasi-Government institution CITB (now MUDA) — namely Siddarthanagar, Alanahalli, K.C. Nagar and J.C. Nagar.

Neither the IAS bureaucrat DC nor the BJP Government in power bother about the deadly consequence this anti-people decision would have on about 25,000 families living in these layouts. A BJP Government without a heart. The site and house owners in these layouts could neither buy, sell or alienate their properties, nor build house in sites already acquired.

Thanks to the Congress  Government with Siddharamaiah as Chief Minister (May 2013 to May 2018) in about 2016 his Cabinet took a decision to exempt these MUDA layouts from the pernicious blanket order of the DC passed in 2010-2011 when BJP Government was in power. Unfortunately, the bureaucracy did not implement the decision till today. And today, we have a BJP Government, but it is doing nothing to help these 25,000 families. Only the BJP MLA S.A. Ramdas is calling press meets and doling out promises of relief.

Surely, Dr. C.N. Manjunath’s perception of our British-made laws and the way our rulers are following them to the detriment of our own poor people seems very correct. God save the people of India from its rulers of this kind.

Some officials after they retire from service tell the new-comers about the loopholes in their department and advise them to correct them, but what were they doing while in service? So, I would like to say that, if you have an opportunity to help people, do that without second thought,  without waiting for retirement to advice others. Otherwise, you will repent for not doing so. After all, verbal advices or instructions would not help anybody. Only Action would help others. Yes, we need grants but we should know how to appropriate those grants for the purpose for  which it is given and adopt values in real life.

Yes, we need computerisation, but more than that, what we need is simplification. In Jayadeva Hospital, poor people are our VIPs. Together with ‘Good Thoughts’, we need the ‘Willingness’ to practice what we consider values. By birth, all of us are universal beings. Even after our death, we will remain one. But, our life would have meaning only if we lead our life as  ‘universal beings’ in between our birth and death.

A number of institutions from abroad have conducted research in Jayadeva Hospital and have lauded our efforts of providing quality treatments at low cost. We might have a tiny physical heart, but spiritually, we should be big-hearted in the sense of being generous, kind, compassionate and magnanimous towards our society.

We should see God in our patients as this would inspire us to perform even better. If we believe in God, it would help us to take a righteous path. Have faith in God. Those who are holding high positions should help others working with them to grow as it would bring a sense of fulfilment to self and a deeper understanding about what makes life worth living.

My salute to Dr. Cholenahally Nanjappa Manjunath for his selfless service and may his tribe increase. Born on 20th July 1957 to Chamaraje Gowda in Hassan district, Dr. Manjunath, a Padma Shri awardee, graduated in Medicine from Mysore Medical College (MMC), secured his MD from the Bangalore Medical College and Research Institute and a DM in Cardiology from Kasturba Medical College, Mangalore.

In 1988, he joined Sri Jayadeva Institute of Cardiovascular Sciences and Research as a member of faculty and worked there in various capacities such as Assistant Professor and the Professor of Cardiology till he was appointed as the Director of the Institute in 2006.

Note: Now our News Editor tells me that, the above speech by Dr. Manjunath was delivered at the Senate Bhavan in Manasagangothri, Mysuru, on Sept. 23, 2018 and the report of the felicitation function was published in SOM the next day (Sept. 24).

3 COMMENTS ON THIS POST To “Cardiologist Dr. C.N. Manjunath: A visionary and a role-model of an Indian — 2”