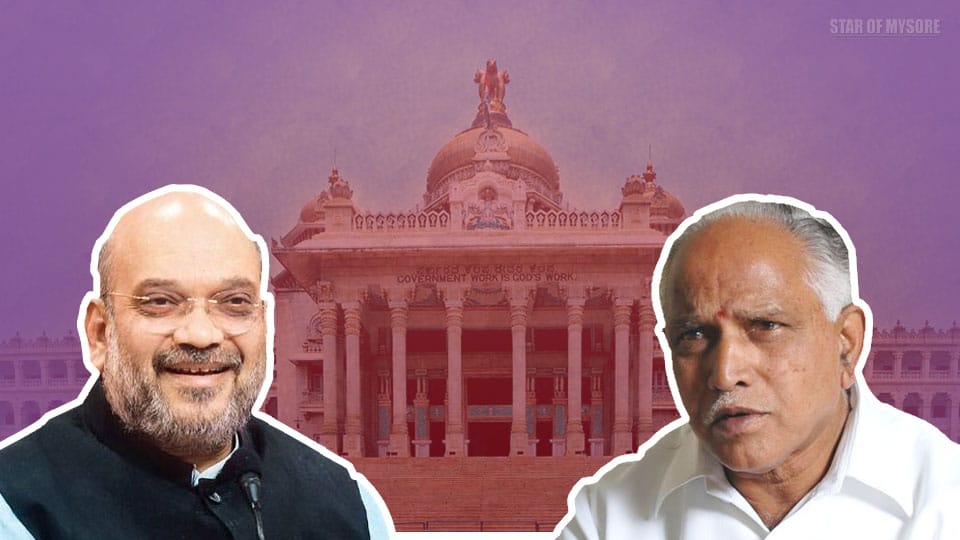 BJP will win Karnataka only if Amit Shah and B.S. Yeddyurappa work together to the exclusion of others with ambition

Are we going to see in Varuna Constituency a replay of 2006 by-election in Chamundeshwari Constituency where Siddharamaiah contested as Congress candidate after quitting JD(S) and also his MLA seat? One S. Shivabasappa, a political non-entity, a Veerashiva leader of Mysuru taluk who was not a politician but was canvassing for Congress leader M. Rajashekarmurthy, aged 70 years, was fielded as JD(S) candidate against the powerful Siddharamaiah. And Siddharamaiah won by a whisker — by 257 votes.

Who knows, now in Varuna too, a miracle can happen where the present BJP candidate Thotadappa Basavaraju, a Lingayat and a disciple of Ananth Kumar, the Union Minister, may either win or lose by a whisker like it happened in the case of late Shivabasappa in 2006. Now BJP should wait for a miracle in the absence of a favourite, winning candidate B.Y. Vijayendra. Amen!

Yesterday I had left Mysuru early morning for Bengaluru to see an ailing friend and returned late in the evening when the Star appeared in the house, I mean Star of Mysore. The lead headline shocked me so much so I called my editor M. Govinde Gowda, a minor expert in Gowda and Lingayat politics of old Mysuru, and asked if it was the High Command at Delhi or at Bengaluru that had the BJP boat of hope in Karnataka burnt even before it had set sail in South Karnataka.

He gave a tongue-in-cheek reply. ‘Sir, no doubt with an effete Congress High Command at Delhi, the High Command in Karnataka is Siddharamaiah. However, for BJP, the High Command is still in Delhi with its Sutradhar in Nagpur. Casteism seems to resonate strongly within the BJP these days.’

I checked with a couple of my friends in BJP. And what I heard was a lecture on how plans are already afoot to weaken the BJP’s Chief Ministerial candidate B.S. Yeddyurappa even before BJP has won the May 12 elections getting the magic number of 113 out of 224 seats. The plan is to make his selection as the Chief Ministerial candidate, about which Amit Shah keeps declaring in all his public meetings, as untenable as possible.

Apparently, BJP High Command and the Sutradhars sent from Nagpur do not seem to have learnt any political lesson from BJP’s disastrous performance in 2013 getting a mere 40 seats, which is equal to the 40 seats garnered by the third political force in Karnataka, the Vokkaliga-dominated JD(S). This gave Congress, led by the migrant leader Siddharamaiah, a comfortable number of 122. The magic number was 113.

In the earlier election held in May 2008, BJP, under the leadership of the same Yeddyurappa, had secured 110 seats, short of 3 seats for the magic number, with the Congress trailing behind (80 seats). BJP, though captured power through questionable and dubious ways, what with the Operation Kamala and with some help from the infamous Ballari  Reddy Brothers entering BJP like a bull entering the China shop, made Yeddyurappa the Chief Minister. Soon a former Central Minister and an MP from Karnataka, Ananth Kumar, was breathing down his neck like a dragon. This situation was compounded by many cases of corruption at high places (ask former Lokayukta Justice Santosh Hegde) which finally, after three years, led to the doom and downfall of Yeddyurappa. And what a fall. He had to suffer the ignominy of going to jail for a while with the refusal of bail in a case. Thus the future of BJP in Karnataka was already foretold when BJP’s High Command remained a silent witness to its Karnataka leader’s days of doom.

Ananth Kumar, who thought would succeed Yeddyurappa, could not because Yeddyurappa played his political game well by holding the cards close to his heart. He ensured a person from Gowda community (who later let him down) and then a person from his own Lingayat community was made the Chief Minister to complete the statutory five-year term. And Siddharamaiah, as Congress opposition leader, was biding his time like a predator in this treacherous political jungle.

By now BJP High Command at Delhi with an unknown name as its State President was under the delusion that a legally stigmatised Yeddyurappa is not needed. Yeddyurappa soon launched his own party KJP. The result? In the 2013 election, Congress under Siddharamaiah romped home with a solid 122 seats with the National political party BJP reduced to a rump with 40 from its earlier 110 under Yeddyurappa. The reason? Not that people did not like BJP but they liked BJP with Yeddyurappa as its leader. Due to BJP’s internal strife, both Yeddyurappa’s KJP and the BJP lost very badly.

In this defeat, both realised that only together they can win and Yeddyurappa returned to the BJP fold as its President. Now in this 2018 May election with Yeddyurappa as BJP’s CM candidate, the BJP has been hopeful of winning but developments like yesterdays have sent a wrong message to BJP supporters. Neither the BJP at the Centre nor the RSS, the Sutradhar, seems to have learnt any lesson from its 2013 defeat. What happened in Nanjangud yesterday is an indication of this folly.

If the BJP and the RSS did not want B.Y. Vijayendra as its candidate for Varuna (to take on Chief Minister Siddharamaiah’s son Dr. Yathindra), both Yeddyurappa and his son Vijayendra should have been told not to enter Varuna Constituency as an aspirant right in the beginning. He came here with confidence and heraldry by his large number of local supporters, not stealthily. His entry had made big news in all the National, State and local papers and on TV, both National and State and BJP High Command can’t say it did not know.

Now, after allowing him to have a free-run of Varuna Constituency, to the exclusion of any other aspirant, for over a month, to say that Yeddyurappa’s son Vijayendra is not BJP candidate at the last minute, that too while he was going to file his nomination with great fanfare, is nothing but an insane decision, no matter what moral, ethical or legal issues are flaunted as the reason.

This time too, like in 2013, BJP does not need Siddharamaiah, the Karnataka Congress High Command, to decimate BJP. Siddharamaiah’s job is made easy by BJP’s wise men in Delhi and Nagpur. Anyone to take the bet? Well sir, but miracles can always happen. Siddharamaiah has fragmented the society so much — Tipu, flag, withdrawal of criminal cases, discrimination between communities in Government services and the most dangerous one of dividing religions. Who knows, the voters may say enough is enough and let another party rule for another term. Which means BJP might win by default !

It looks that the BJP High Command at Delhi does not like  Yeddyurappa, it likes only the votes he brings. Which is why a political pundit from London, James Manor, who has studied Karnataka politics for over 40 years, says that there are BJP National leaders who do not like Yeddyurappa but they should ask themselves who are the other Karnataka BJP leaders who would be better.

James Manor also warns BJP in the context of the ongoing Karnataka election: “Even if Congress gains many more votes than BJP without getting a majority of seats, it will dent the image and confidence of the BJP.” This has happened in the last Gujarat Assembly election and continued in the recent by-election. This may also reflect in the 2019 Parliamentary election. BJP is warned.

3 COMMENTS ON THIS POST To “Boat Burners of BJP”