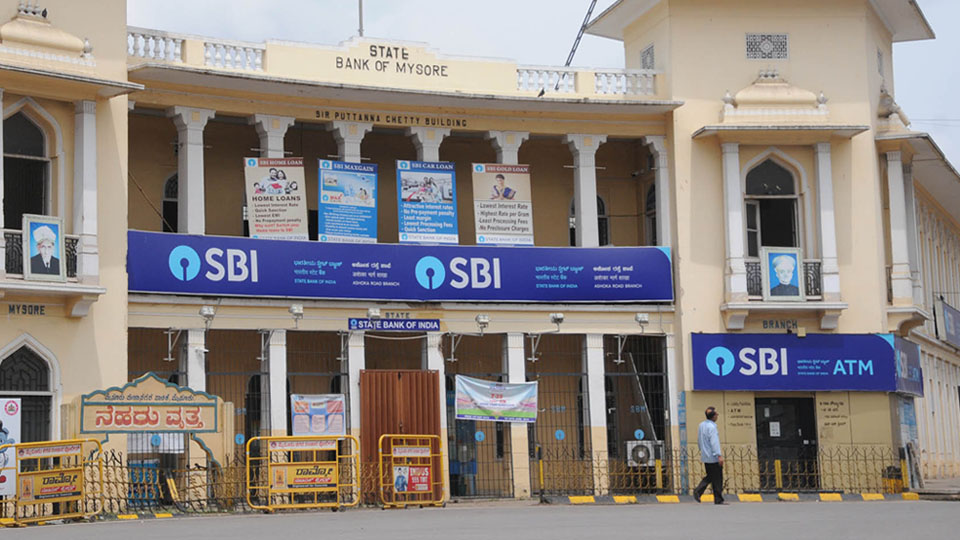 Mysuru:  Automatic Teller Machine (ATM) services of Public Sector Banks, already facing severe cash crunch, were severely disrupted across the city this morning, the second day of the bank strike. Bank Unions have struck work in protest against what they called “a meagre” 2% wage revision proposed by the Indian Banks Association (IBA).

Apart from ATM services, transactions like cheque clearances, demand drafts, RTGS (Real Time Gross Settlement) and remittances were affected although online banking offered some solace to the customers. For many customers who had adopted digital modes of transactions in the aftermath of the November 2016 demonetisation, the strike meant little inconvenience.

However, it was business as usual at private banks as they were not part of the strike. Heavy rush was witnessed at the private banks where people were anxious to complete their cash and online transactions.

Employees of all the 21 State-run commercial banks, regional rural banks, 13 old generation private banks and six foreign banks are participating in the strike, said representatives of United Forum of Bank Unions (UFBU), an umbrella body of nine Bank Unions that had given the call for the strike.

There are nearly 3,500 bank employees in the district deployed across 525 branches of public sector banks and they participated in the strike.

The effects of the strike that began yesterday morning was not felt till last evening. The first after-effect of the strike was empty ATMs. A majority of the over 500 ATMs that operates within city limits are owned by nationalised banks and as such, the machines were closed due to the strike.

Whatever cash that was     loaded to the machines a day before the strike got over by 3 pm yesterday, thanks to panic withdrawals.

Shutters of several ATMs owned by the nationalised banks were down since last evening and anxious people were queuing up before the ATMs attached to private banks.

The strike hit hard small and marginal traders, who still prefer to deal in cash or cheque instruments that need to be deposited, withdrawn or cleared through bank branches.

“We can’t pay wages to loaders and our other employees and the situation will not ease till Saturday and then there is a Sunday. We operate through current account and a two-day strike has crippled our business. Things will be normal only from Monday,” said Mahaveer Jain, a grocery trader at APMC Market.

On their part, over 600 bank employees gathered at the Regional Office of State Bank of India at T.K. Layout opposite Krishnadhama and staged a protest this morning.

Justifying the strike, the striking employees said that the wage revision was due on Nov. 1, 2017, but the Indian Banks Association stated that a salary hike was not possible in view of the losses being posted by banks.