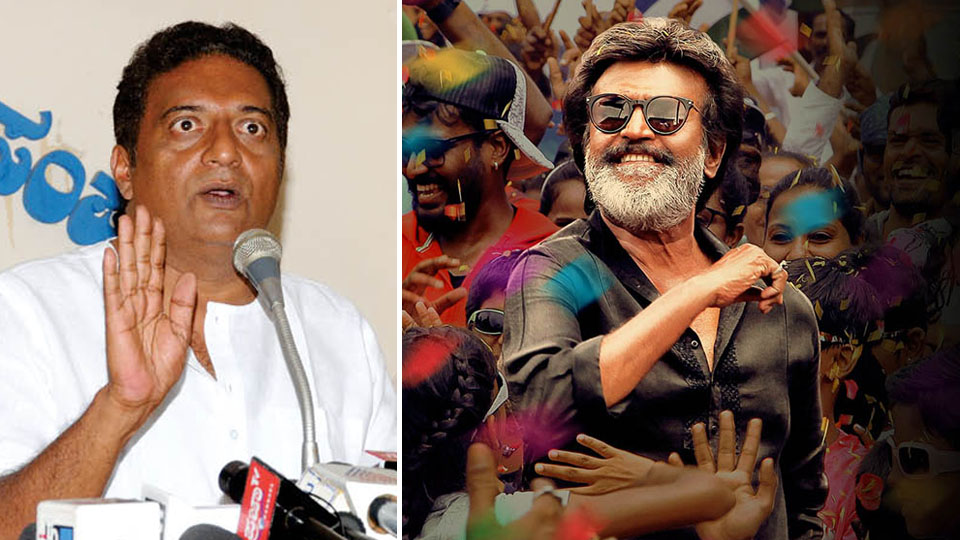 Cauvery and ‘Kaala’ cinema have no connect: Prakash Rai

Bengaluru/Mysuru: Actor Prakash Rai (Prakash Raj), who is known for his controversial, sometimes non-committal and convenience-based statements on River Cauvery and his acting career in Tamil Nadu and Karnataka, is in the news again and this time he has slammed the ban issued by pro-Kannada groups on Superstar Rajinikanth’s ‘Kaala.’

”It is the duty of respective State governments to sort out inter-State disputes, be it water sharing or any other subject. The elected governments will sort out such issues in consultation with experts. The cinema fraternity which has no borders should not be victimised for any such reasons,” he asserted.

Prakash called upon the activists and the Karnataka Film Chambers of Commerce and Industry to introspect on what could be achieved by stalling ‘Kaala’ in Karnataka theatres. ”Agreed that Rajinikanth’s statement on Cauvery has been not acceptable to us in Karnataka. But this decision to boycott his film across Karnataka can be against a popular opinion,” he opined.

Instead, he said, it was prudent to let the film be exhibited in Karnataka and those who did not wish to watch it keep away from cinema halls.

”If only a section of cinema fraternity or some organisations decide that this film not be screened in Karnataka is not correct. This argument has nothing to do with the actor or those involved in producing this film. It is wrong that only a small section of people decide what Kannada cinema going public should watch or not,” he said in a statement.

Prakash said such decision to boycott a film anywhere in a country would adversely affect thousands of those employed in the entertainment industry from top, like a producer to a cinema house worker. ”Should we take away their earnings for some political issues,” he asked.

Not taking Prakash Rai’s statement lightly, Vatal Nagaraj, the President of Kannada Chaluvali Vatal Paksha, has hit out at him for supporting the release of ‘Kaala’. Nagaraj has questioned the actor’s “mental stability” over his comments and alleged that he was doing it for “free publicity.”

“Rai is not mentally stable. I have respect towards him but looking at his recent-month activities, it is clear that he is trying to garner free publicity,” he told reporters.

“Rajinikanth is anti-Kannadiga. Prakash Rai should have maintained dignified silence when he could not comment on Rajini’s stand. He should have shut his mouth instead of blabbering for publicity,” Vatal Nagaraj claimed.

3 COMMENTS ON THIS POST To “Cauvery and ‘Kaala’ cinema have no connect: Prakash Rai”