Home » Elections 2018 » Caste is not a criterion to become Chief Minister: Prakash Rai 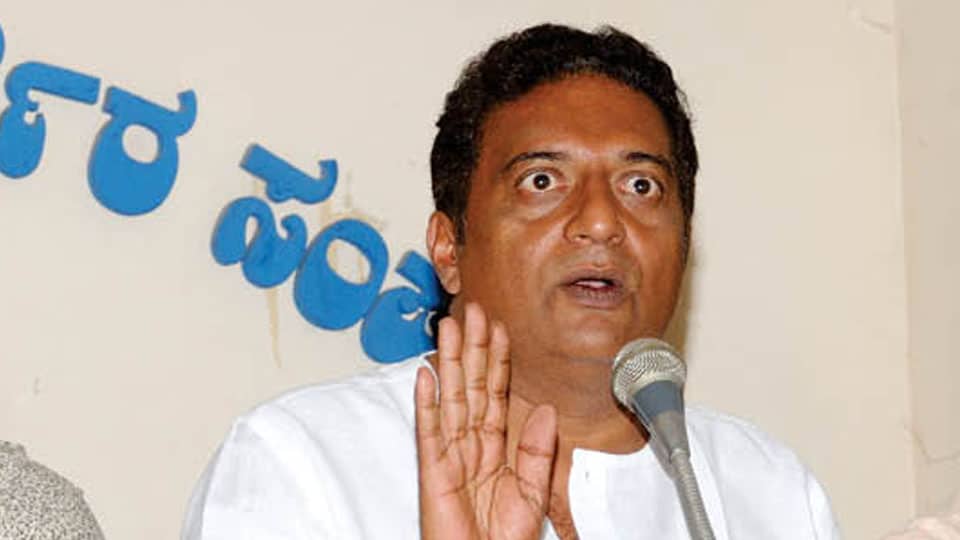 Caste is not a criterion to become Chief Minister: Prakash Rai

Mysuru:  Caste should not be a criterion for someone to become the Chief Minister. Only those who are eligible, deserving and hard working should be made the Chief Minister and not a person belonging to a particular caste or community, said multi-lingual actor Prakash Rai.

He was reacting to a question on Dalit Chief Minister at an interaction organised at Pathrakartara Bhavan here yesterday and said only those who take responsibility for their actions and work hard in the interest of the State and nation must become Chief Ministers and Prime Minister.

“I will support any person be it Dalit, Hindu or anybody else who works, for the Chief Minister’s post and I will not support anyone on the basis of caste,” he said.

As a few leaders are talking about changing the Constitution, there is a huge concern if BJP comes to power. Also everyone should think what the situation in the States of Uttar Pradesh, Madhya Pradesh, Rajasthan and Gujarat where the BJP is in power is and then cast their votes. The BJP leaders have the word communal on their lips, he alleged.

If BJP comes to power in the State then they will not allow B.S. Yeddyurappa to continue as Chief Minister for long. He will just be rubber stamp and in the Assembly, the Reddy brothers will rule the roost and Anant Kumar Hegde’s plan of changing the Constitution will be discussed.

Along with this, Karnataka will be a home stay for Uttar Pradesh Chief Minister Yogi Adityanath and party President Amit Shah, he said. The May 12 Assembly elections in the State is a very crucial election for the country and people can vote for Congress, JD(S) or any other party, except the BJP and this is my personal opinion, he said.

Neither the Congress nor the BJP has done anything big for the country. Even the Congress had declared Emergency. However, when compared to the mistakes and bungling of the Congress in the last 65 years, the BJP’s misrule in the last four years is causing concern for us, he said and added that this is because it is planning to change the Constitution.

“Mine is not anger but resentment. I am not a Chowkidar (security guard). However, if BJP is the Chowkidar then we have to be Chowkidars watching them. I have spoken truthfully. But the BJP has indulged in my character assassination but not spoken about ideologies. Hence, this is not a game of cricket nor is it a debate to be won. Think before you vote and your vote will make a difference for the next five years and will  decide the future of the country,” he said.

‘Save Constitution’ Convenor K.L. Ashok and DSS Convenor Shivakumar were present during the press meet.

Karnataka Elections 2018 Prakash Rai.
Echo of Writ Petition in High Court over gun license exemption to Kodavas
Constitution will be tested if BJP comes to power in State: Jignesh Mevani

2 COMMENTS ON THIS POST To “Caste is not a criterion to become Chief Minister: Prakash Rai”