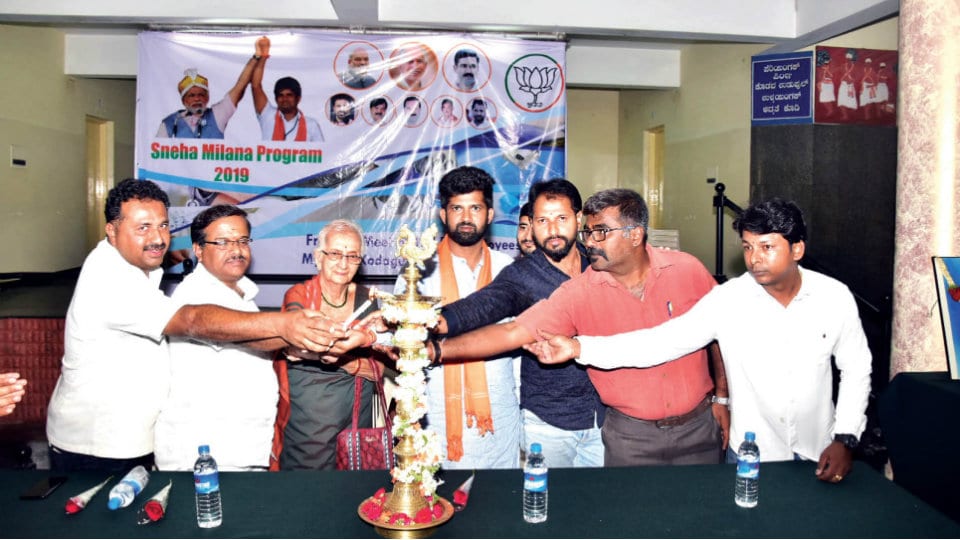 Centre has sanctioned many projects for comprehensive development of Mysuru: MP Pratap Simha

He was speaking at ‘Sneha Milana,’ an interaction meet with IT-BT employees organised at Kodava Samaja Hall in Vijayanagar here on Sunday.

Pointing out that when he was announced as the BJP candidate from Mysuru-Kodagu for the 2014 LS polls, he was wondering why Mysuru had not matched cities such as Pune in terms of development despite having vast resources. Simha said he has prioritised better road, rail, and air connectivity for the city so that Mysuru can become a hub of commercial activities.

Highlighting his achievements as an MP over the past five years, he said that Mysuru-Bengaluru double-track completion, electrification of Mysuru-Bengaluru Railway track, introduction of six new trains between Mysuru and Bengaluru, Mysuru-Kushalnagar Railway line, Satellite Railway Terminal at Naganahalli on Mysuru-Bengaluru section, conversion of Mysuru-Bengaluru Highway into a 10-lane road, air connectivity with cities such as Chennai, Kochi, Hyderabad, Goa, Belagavi and Bengaluru, setting up of Passport Seva Kendra, development of Chamundi Hill under ‘PRASAD’ scheme, Hinkal flyover, bringing the Ring Road under National Highways Authority of India for better maintenance and many other such projects were his contributions.

Maintaining that he has worked honestly and efficiently as an MP under Prime Minister Narendra Modi’s leadership, Simha said Mysuru has every opportunity to grow as a global city and he is working in that direction.

Noting that 32 lakh tourists visit Mysuru annually, the MP stressed on the need for tapping the tourism potential so that the city can become a global tourism hub. Emphasising on the need for re-electing PM Modi, Simha appealed for his re-election as well so that he gets one more opportunity to work under Narendra Modi.

READ ALSO  MP dismisses doubts on him getting LS ticket

Stating that MP Pratap Simha has brought projects worth Rs. 13,000 crore for comprehensive development of Mysuru-Kodagu LS Constituency, Phaneesh maintained Simha was no commission agent and had worked sincerely as an MP and as such the party was seeking votes based on the achievements of the MP.

Underlining the need for re-election of Modi as PM in the better interest of the country, he expressed full confidence that PM Modi and Simha would be re-elected in the LS polls.  He further said that Modi has brought hope to crores of Indians who were looking for a credible leadership.

Corporator M.U. Subbaiah said that Pratap Simha, who was an unknown candidate here five years ago, surprised everyone by defeating the then sitting Congress MP, a veteran politician.

Claiming that Pratap Simha has earned confidence of the voters through hard work and commitment, Subbaiah maintained that the influence of PM Modi has only grown bigger  with even those who had opposed him earlier vouching for him now. Stressing on the need for every eligible voter to exercise their franchise in the interest and spirit of democracy, he expressed confidence that Simha would win by a bigger margin this time.

MLA Nagendra said that PM Modi has provided a model government through good and clean governance.

Listing out the achievements of Pratap Simha as MP, Nagendra assured that the Chamaraja Assembly segment, which he represents, will fetch the biggest number of votes for the BJP candidate in the LS polls.

BJP Yuva Morcha State Vice-President Bhavani Rao More, the convenor of the meet Chetan Halesh and others were present on the occasion.