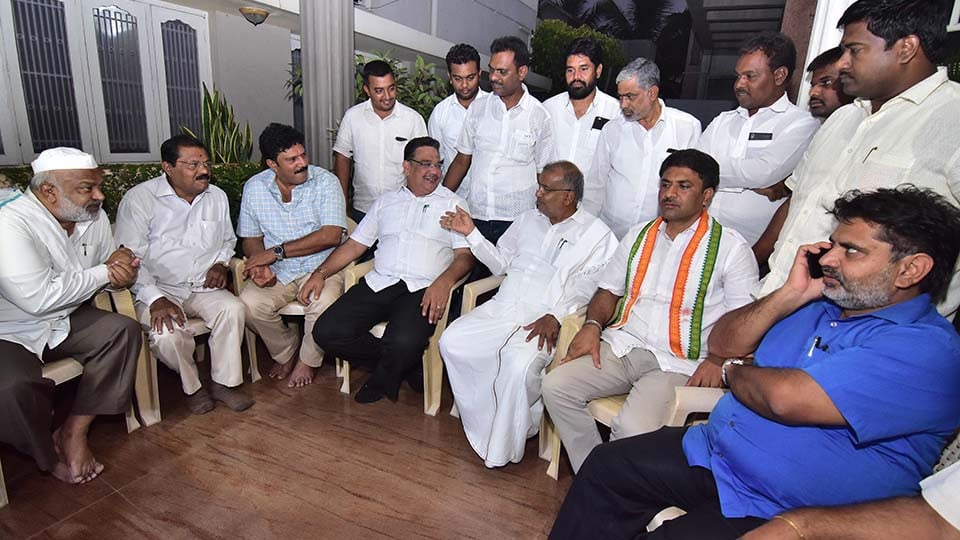 Mysuru: Even as the Congress and JD(S) leaders at the State-level are working overtime to bring workers of both the parties for Lok Sabha poll campaign, Mysuru District Minister G.T. Devegowda (GTD) is said to have been disappointed over coordination between the coalition partners in Mysuru.

GTD, who has so far stayed away from campaigning for Congress candidate C.H. Vijayashankar, is said to have been upset over the failure of some local Congress leaders to take him into confidence.

An influential JD(S) Minister from Mysuru, GTD was not present when Congress candidate C.H. Vijayashankar filed his nomination on Mar.25.

GTD was away from Mysuru when Vijayshankar and former Minister Dr. H.C. Mahadevappa tried to meet him recently for seeking his (GTD) support. But after a couple of days, GTD returned to Mysuru, when he told the media that there was a lack of coordination between the coalition partners at the local level.

Evens as GTD issued his statement, a delegation of Congress leaders, comprising NR MLA Tanveer Sait, former Mayor Ayub Khan, City Congress President R. Murthy, District President Dr. B.J. Vijaykumar and also KEA Chairman Abdulla, a JD(S) leader, met the District Minister at his Vijayanagar residence yesterday and sought his support for the Congress candidate from Mysuru seat, which has been ceded to the Congress as per a seat-sharing pact reached between Congress and JD(S).

Even as Congress leaders are making attempts to seek the support of G.T. Devegowda, which is crucial for the coalition candidate C.H. Vijayashankar, former Minister Dr. H.C. Mahadevappa, accompanied by Vijayashankar and a few Congress Legislators and leaders, visited the residence of GTD in Vijayanagar late last night and sought his support.

READ ALSO  ‘Take up farming to lead a peaceful life’

G.T. Devegowda said that top leaders of the Congress and JD(S) would hold a joint press meet in Mysuru on Apr.7 as a show of strength and bonding between the coalition partners.