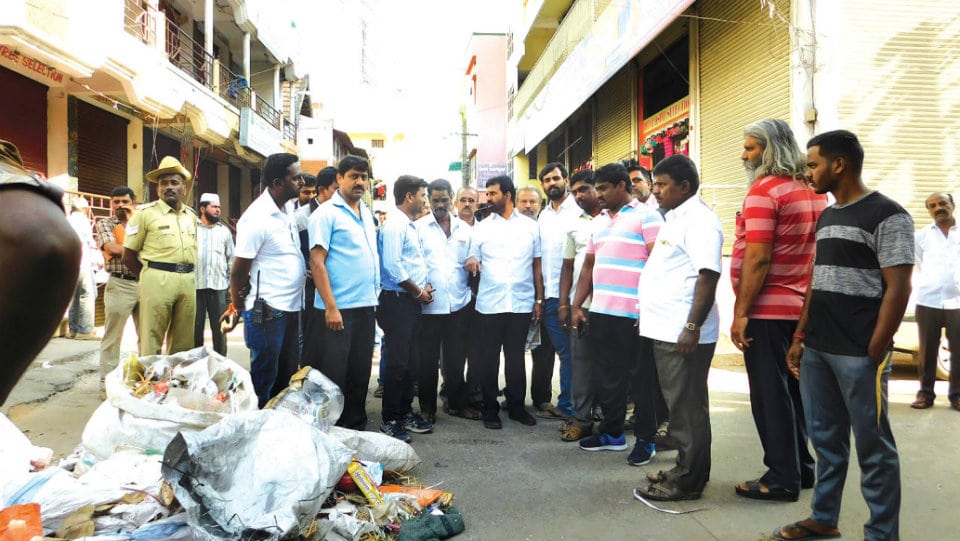 Sensing the problems following complaints from the public, Chamaraja Constituency MLA L. Nagendra during his padayatra with officials of different departments in Ward No. 41, here yesterday, directed the Police officials to allow vehicles to take a right turn at the junction. He also asked the officials to allow parking on either side of K.R. Hospital and Sayyaji Rao Road stretch.

The public drew his attention to the problem faced by them to reach Sayyaji Rao Road from Dhanvanthri  Road side and he immediately directed the Traffic Police Officials to take action by clearing the barricades placed at the junction near Bata showroom so that motorists could take a right turn.

He also wanted the officials to take steps to raise the manhole height in a few places.

Upset with the incomplete road works in spite of the completion of underground drainage works, he took the officials to task and asked them to complete asphalting work within two to three days.

Nagendra also announced some of the development works to be taken up in the ward, including concreting of roads behind Devaraja Urs Road, Seebaiah Road, K.T. Street, conservancies in K.R. Hospital area, changing of weak electric poles, drainage reconstruction from Narayan Shastry Road-Shivarampet Road junction up to Devaraja Market Road at a cost of Rs.50 lakh, and replacing underground pipes on Aane Sarot Street.

When the poor people living in tiled and sheet houses requested for safer houses, he asked the officials to take applications from them and find a project under which they could get better houses.

Noticing the weak condition of Devaraja Police Station on Dhanvanthri Road, Nagendra asked the PWD officials to bring to the notice of Housing Minister to either restore or construct a new building.

Since the last eight months I have undertaken padayatra in 14 wards listening to the complaints and grievances of the public, taken action and launched development works. Most of the works have been going on. The water problem has been more or less resolved. There are a few complaints related to UGD and they have been taken up on priority basis. On the whole, I am working hard to make my constituency a model one. I have opened an office in Jaladarshini Guest House premises and public can contact me to lodge complaints and for solutions.