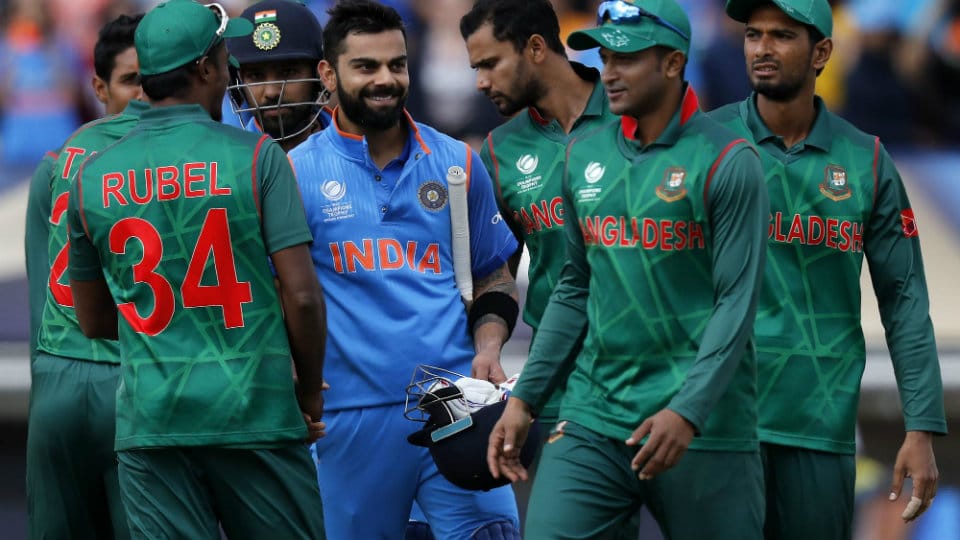 It was a classic case of the master giving a lesson to an upstart apprentice as India thrashed Bangladesh by 9-wickets to book a place in the final of the ICC Champions Trophy for the fourth time. The high flying Bangla Tigers were brought back to the ground as the ‘Men in Blue’ outclassed their opposition with both bat and ball. The victory also means India will take on Pakistan in the final on Sunday (June 18) at The Oval in London, in what would be a first meeting between the arch-rivals in the final of an ICC 50-over tournament.

After their bowlers had restricted Bangladesh to a below par total of 264, the Indian top order of Rohit Sharma (123 not out), Shikhar Dhawan (46) and Virat Kohli (96 not out) made a mockery of the target, chasing it down with 59 balls to spare.

Bangladesh needed to put pressure on India by picking up early wickets but the old firm of Dhawan and Rohit didn’t allow the opposition to make any in roads. Both batsmen attacked Mustafizur Rahman to defame the ‘mystery’ bowler early as runs came a brisk pace for India.

Dhawan launched an aggressive attack in the eighth over as he hit Taskin Ahmed for two boundaries and a six, as the Bangladeshi paceman was guilty of pitching the ball too short.

The duo, who are the most successful opening pair in the history of Champions Trophy, were all-set to put on another century stand, until Dhawan had a brain snap. He walked down the pitch to Mashrafe Mortaza and in search of a boundary that would take him to his fifty, he ended up getting a leading edge, which was caught at backward point, to depart for 46.

India had lost their first wicket with 87 runs on the board and Bangladesh sniffed an opportunity. But Rohit Sharma, in the company of Indian captain Virat Kohli, ensured Bangladesh never had a chance.

Rohit brought up his 11th one-day century in style with perfectly timed hook shot off the bowling of Mustafizur Rahman. It was Indian captain’s turn to reach a landmark as he became the fastest to score 8000 runs in ODI cricket (175 innings), beating AB de Villiers’ record by 7 innings.

India chased the target down on the first delivery of the 41st over with Virat Kohli hitting the winning boundary.  Earlier, Bangladesh flattered to deceive in their innings as a 123-run third wicket stand between opener Tamim Iqbal and Mushfiqur Rahim put the Tigers in a position from where they could have easily notched up a total in excess of 300.