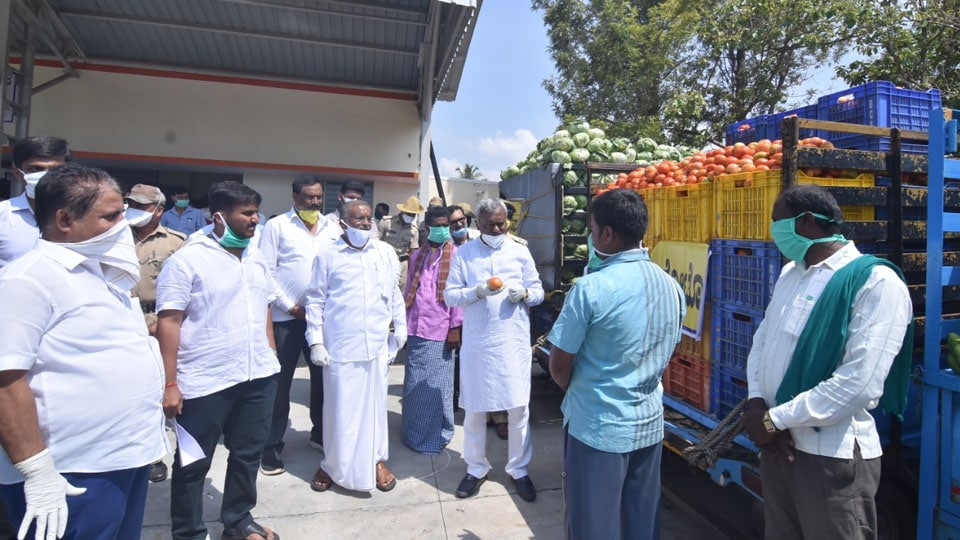 Mysore/Mysuru: The farmers of various Gram Panchayats in Chamundeshwari Constituency, under the leadership of MLA G.T. Devegowda (GTD), donated a large quantity of food grains and vegetables to be distributed among the needy and the same was handed over to the District Administration yesterday by MLA G.T. Devegowda and District Minister S.T. Somashekar at Jayapura Gram Panchayat premises.

Farmer Kallahalli Rajanna of Jayapura Hobli donated 1 tonne tomato, Swamy of Baradanapura: 800 kg green chilli, Mahesh of Ballahalli: 1 tonne banana and Mahesh of Ballahalli: 3 tonne pumpkin, Mohammed Ali of HMI Fruits in Jayapura donated 3 tonne watermelons. Apart from the above, many farmers donated vegetables they had grown. District Minister S.T. Somashekar, who received the food grains and vegetables from the farmers thanked them and enquired their well-being.

As MLA G.T. Devegowda had taken the farmers of his Constituency into confidence and collected a large quantity of food grains and vegetables to be distributed to the needy, District Minister S.T. Somashekar lauded GTD on behalf of the State Government.

“Farmers have given banana, cabbage and other vegetables they had grown and also various food grains free of cost despite them facing many problems. The farmers have taken loans, faced crop loss and did not get the minimum money for their produce. Despite all this, they have donated liberally and it will not be wrong if farmers are called as real Gods,” opined GTD.