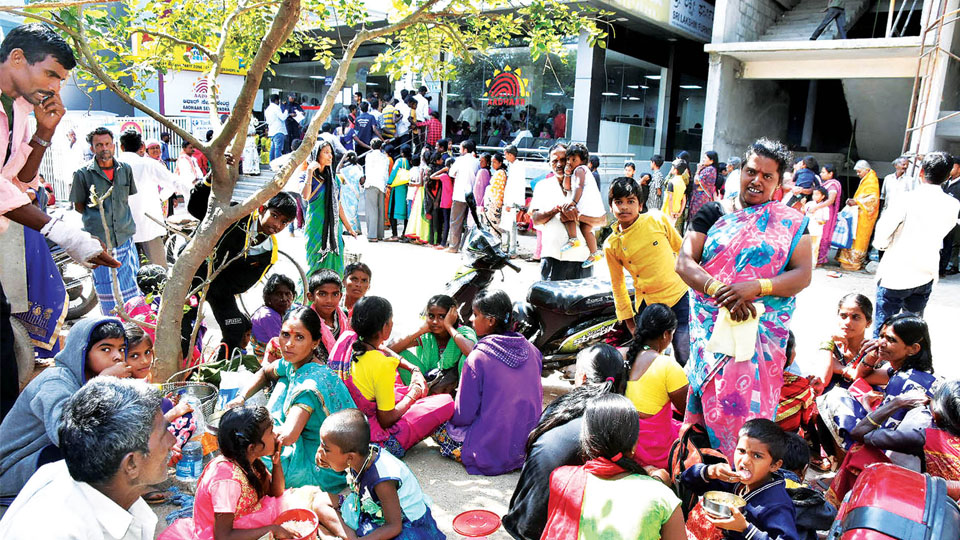 Mysuru: Hundreds of people from across the district are thronging Mysuru’s first Aadhaar Seva Kendra (ASK), operated by Unique Identification Authority of India (UIDAI) at Vijayanagar First Stage to get their ration cards linked with Aadhaar Card or to get their addresses updated, iris scan and fingerprinting done.

The Food and Civil Supplies Department has fixed January 10, 2020 as the deadline to link Ration Card with Aadhaar Card to adhere to the Centre’s deadline of June 30, 2020, to roll out the ‘one nation, one ration card’ system under which beneficiaries can buy subsidised food grains from ration shops in any part of the country.

Villagers come here as early as 4 am in vehicles and tempos along with their families, women and children and stand in long queues to get their work done.

Joining them are people who have taken online appointments for Aadhaar Card updation. As such, the Seva Kendra has turned messier and UIDAI-hired agencies are struggling hard to handle the rush.

The Seva Kendra campus at Vijayanagar First Stage, on an average handles 1,000 applicants per day. Linking of Ration Card with Aadhaar requires the updation of Aadhaar Card to carry the details of all persons in the family including children. If the children below five years of age are already enrolled in the Aadhaar system, their fingerprints and iris data (biometrics) have to be updated. As such, people come here with families to update the data.

This has created a public nuisance in Vijayanagar First Stage (CCK Complex, New Kalidasa Road, Opposite MUDA Complex) and residents surrounding the Seva Kendra are complaining to Mysuru City Corporation (MCC) that visitors from rural areas of the district including Hunsur, T. Narasipura and Nanjangud are dirtying places in front of their houses.

“These villagers who come in tempos and vehicles not only block the roads with their vehicles but also relieve themselves by the side of the roads and other open areas. They come with breakfast and lunch bags and create a mess in the area,” complained residents.

Subbaiah also asked him to open the cellar space of the building so that villagers can park their vehicles there instead of them parking by the side of the road obstructing traffic.

He asked the building owner to appoint a couple of security men to handle the crowds while the officials at the Seva Kendra are busy in Aadhaar updation.

The Aadhaar Seva Kendra allows online applications where slots are booked. This apart, people can stand in queues to get their details updated. There is such a crowd at the Seva Kendra as certain agents, cyber cafe personnel charge anywhere between Rs. 100 and Rs. 150 for one booking slot.

Moreover, other Aadhaar updation centres like Karnataka One, MysoreOne, banks, post offices and Atalji Seva Kendras process only 50 applications per day. Here too agents and touts fleece the applicants by charging Rs. 150 – Rs. 200 to fill a form or to book an online slot.

If one visits a Karnataka One or MysoreOne Centre or Atalji Seva Kendra behind the Deputy Commissioner’s Office one can see at least 20 agents and touts helping out the applicants to fill forms for a fees.  Some agents block the slots and give only 20 tokens out of the allotted 30 to create artificial demand for the tokens so that they can sell the remaining 30 tokens for a price.