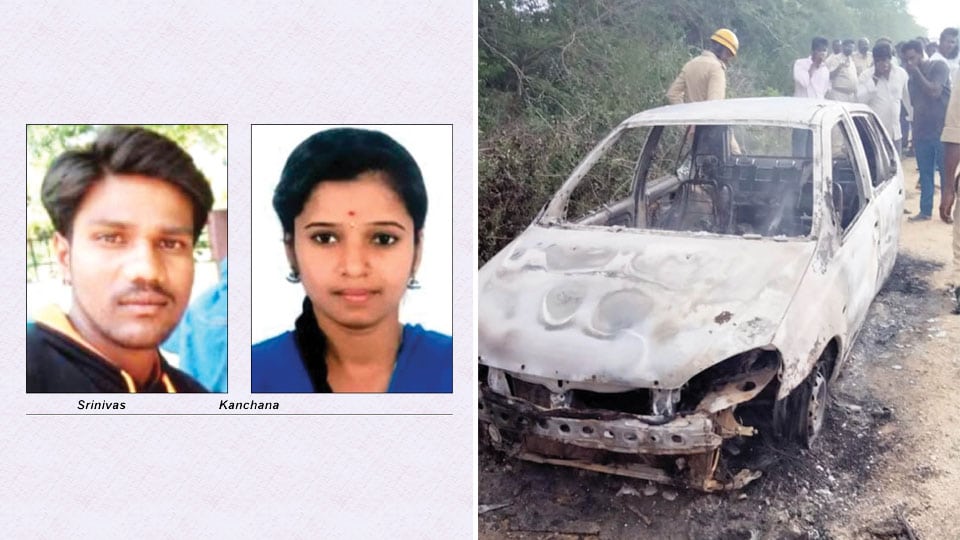 Yalandur: Desperate to continue their relationship through marriage, two lovers ended lives in a disturbing way by sitting inside a car and then immolating after dousing themselves with petrol.

The horrific incident was reported on the banks of Theramballi Lake in Kollegal taluk last evening. Srinivas (27) and his lover Kanchana (25) took the extreme step as they had doubts that their families would not allow them to marry due to professional status.

Srinivas hailed from Mamballi village and he worked as a tractor driver while Kanchana, from the same village, was working as a Nurse at Chamarajanagar District Hospital. They were in a relationship for a couple of years and Srinivas was pressing Kanchana to marry him at the earliest.

Kanchana, however, was reluctant and was telling Srinivas to wait for some time as she had to build a house for her mother. But Srinivas had confided with his friends that though they belong to the same caste, Kanchana’s family might not agree for the alliance as he is a tractor driver.

This was bothering Srinivas and he had attempted to commit suicide by hanging three months back. However, he was rescued by his family members who had found him to be depressed. They rushed him to a hospital where he survived.

Yesterday, Srinivas borrowed his uncle’s Indica car and went to pick up Kanchana from Chamarajanagar Hospital and both of them arrived near Theramballi Lake. Srinivas then drove the vehicle onto the banks and locked the car doors.

The couple later doused themselves with petrol and as it was a pre-planned incident, Srinivas had bought petrol and had filled one or two bottles. Seeing smoke billowing out of the car, local villagers and passers-by alerted the Police. As the doors were locked, no way could either of the couple escape from fire. It is, however, not clear that if both Kanchana and Srinivas had entered into a suicide pact or any one of them being forced into the act.