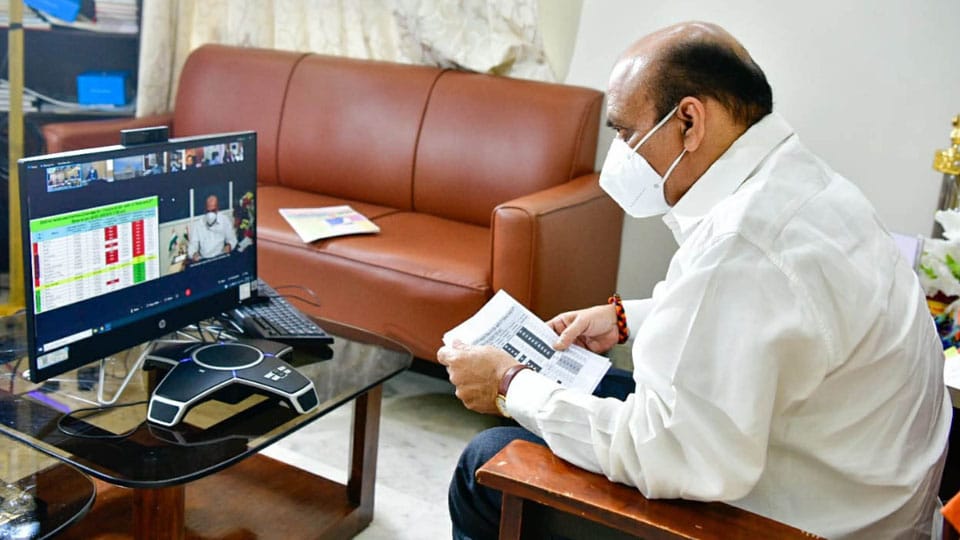 Chief Minister pulls up districts lagging behind in vaccination

Bengaluru: Chief Minister Basavaraj Bommai has given time until the end of the month for districts lagging behind in COVID-19 vaccination coverage to pick up pace.

At a meeting with the Deputy Commissioners (DCs) and other officials of 18 districts last evening, Bommai asked all the districts whose vaccine coverage is lower than the State average to be on par by January-end.

The State average for first dose vaccine coverage as on date is 99.6 percent, 83.3 percent for second dose and 62 percent when it comes to those aged 15-17 years.  Bommai directed the DCs to raise the average vaccination coverage and directed the District Health Officers (DHOs) to visit taluks and review distribution of medicines and monitor the situation.

Since 94 percent of the infected are in home isolation, the CM warned that steps should be taken to avoid transmission among others members at home. “The other members of the family too should be tested and treatment provided, if necessary,” he said.

The CM gave a list of measures for the district administrations to take, to successfully cope with the third wave that is expected to peak by Jan. 25. He asked the DCs to ensure that all houses in rural areas have access to health kits and those under home isolation are well taken care of. The DCs and DHOs must visit taluks and monitor medicine distribution. A separate SOP has to be drafted to ensure that doctors and nurses visit homes in rural areas, he said.

Health Minister Dr. K. Sudhakar, who spoke to reporters after the meeting, said the CM had directed to set up war rooms in all districts to coordinate tele-triaging efforts. Bommai asked officials to open more fever clinics and establish sufficient COVID Care Centres to sustain infrastructure when there is a further rise in cases, Dr. Sudhakar said.