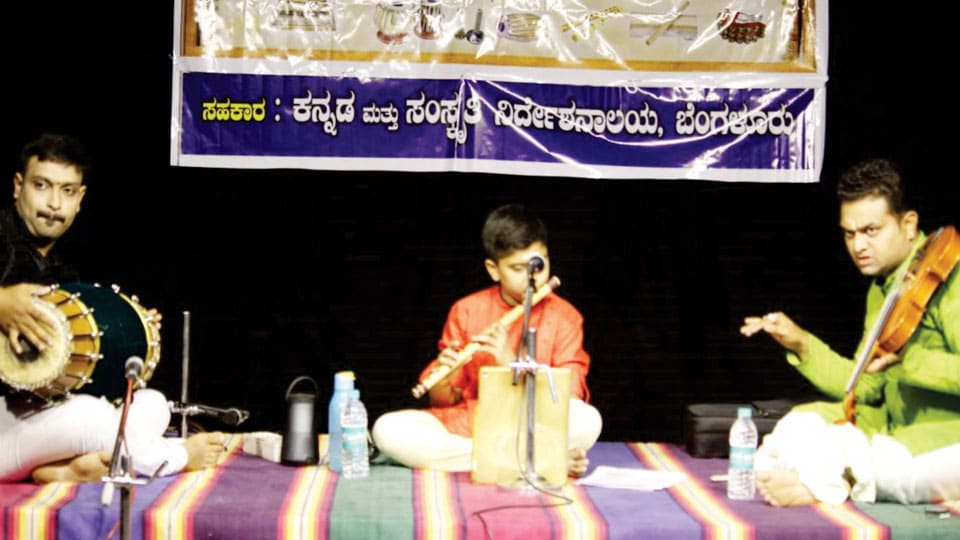 Mysuru, known as the Cultural Capital of Karnataka, is indeed becoming much richer in art and culture from the past decade. There are more number of music, dance and drama programmes and festivals being organised successfully by cultural institutions.

at Veene Seshanna Bhavana in Kuvempunagar, Mysuru. The one-day festival was held in the memory of Karnataka Kalashree late Vidwan L. Ramasesha.

Beginning with Varnam in Raga Kadanakutuhala, the young artiste presented Thyagaraja’s compositions Yochana Kamala Lochana and Raama Nee Pai Tanaku. A pleasant and happy mood was created with the last piece which was Thillana in Ragam Thilang. The lower notes gave a melancholy character, however, in the medium and upper register, the flute sounds mellow, light, wafting, bright, rich and shrilling.

Secondly, with his tuneful voice, singer Yeashas N. Kashyap, son and disciple of Vid. Naveen Andagar, presented various classical pieces setting out with Subramanya Iyer’s Navaragamalika Varnam, Sri Gajananayutham: a devaranama composed by Sri Muthuswami Dikshitar, Saamajavaragamana: one of the famous composition of Sri Thyagaraja, Venkatachala nilayam: composed by Sri Purandaradasa in Sindhubhairavi Ragam. All these pieces were brilliantly presented which were accompanied by the mridanga and violin artistes. These were very well-appreciated by the art-lovers.

Later, in the second half of the programme, the audience witnessed Vid. Varija Nalige’s team presenting Bharatanatyam items beginning with ‘Gajavadana beduve’ in the praise of Lord Ganesha, followed by a Jathiswaram and concluded their performance with Saint Purandaradasa’s ‘Mella mellane bandane.’

This initiative was a unique idea of bringing Music and Dance together on one stage in a single Festival by Vidu. Nagashree Phaneendra Kumar.